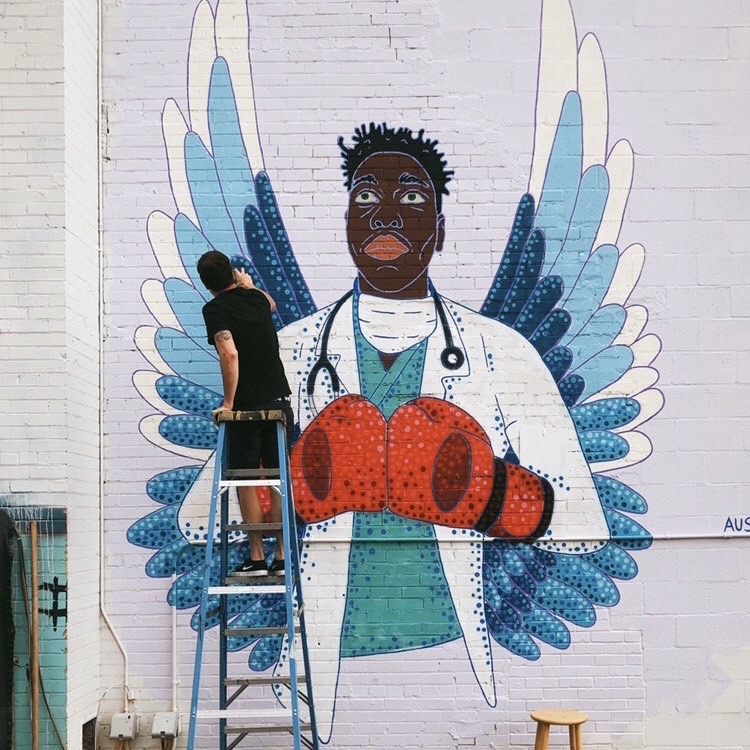 Austin Zucchini Fowler, a coach of DU’s Hilltoppers club swimming team, wanted to make public his appreciation for those on the front lines of the COVID-19 pandemic. Fowler, who attended DU’s School of Art and Art History from 2007 to 2011, spray-painted a series of large-scale murals on building walls throughout downtown Denver featuring teachers, health care workers, first responders and others on the front lines.

“The first responder piece is particularly meaningful to me because my oldest brother is not only a doctor, but he’s also in the U.S. Army,” Fowler says. “The piece represents some of the cool stuff that he’s done over the past couple of years.”

Fowler created his first mural — a nurse with wings and boxing gloves — in April on a blank wall on East Colfax Avenue. The response took him by surprise. 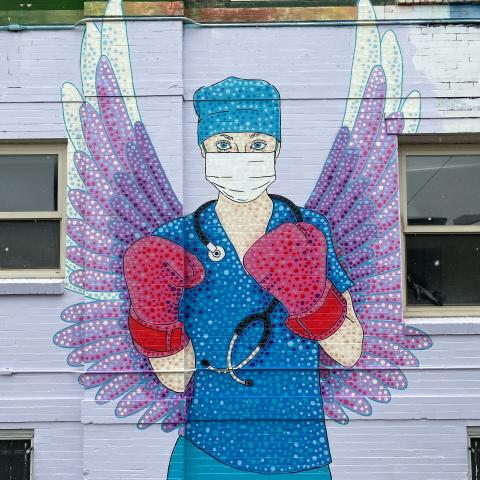 “I was getting the most incredible e-mails from health care workers,” he says. “The coolest thing they were giving me feedback on was that it boosted morale in the hospital. It was something to talk about, something to visit.  A lot of them would go and take pictures in front of it — and they felt empowered. They were so grateful for the message.”

Encouraged by the feedback — and the business owners who began asking him to create similar artwork on their walls — Fowler decided to create a series of murals to express the gratitude of an entire city.

“I love the community aspect of public work. I wanted the thank you and gratitude not just to come from me, but from the community,” he says. “I’m not the only one who is feeling grateful right now. It was cool to send a message that a lot of people are feeling and represent the community as a whole in that way.”