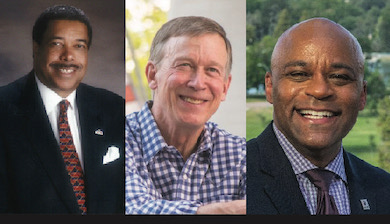 During a special Inaugural event on Thursday, Oct. 7, DU’s 19th Chancellor Jeremy Haefner brought together three of the city of Denver’s past and present mayors for an important conversation on servant leadership, civil discourse and character.

Former Mayor Wellington Webb, former Mayor and now U.S. Sen. John Hickenlooper and current Mayor Michael Hancock shared with Chancellor Haefner their experiences on the job and their passion for our shared city. Former Mayor Federico Peña shared his regrets for not being able to attend. While the challenges facing Denver may have shifted during their times in office, the men share a special bond.

“We have leaned on each other and consulted one another, even if we are going to hear things we don’t want to hear,” Hancock said. “We tell each other what we need to hear. With Mayor Webb and Senator Hickenlooper, I have two guys I can call at any time and get their words of wisdom and insight.”

Hickenlooper recalled connecting with Webb as the outgoing mayor passed him the baton.

“We mayors stick together,” Hickenlooper said. “I will never forget the day after the election, I came down to City Hall, and Mayor Webb very kindly, metaphorically, sat me on his knee and schooled me. He laid it out—the good, the bad, everything. It made such a difference in being able to come in… I want to thank Mayor Webb and Mayor Hancock for being such great partners. I would not be here without the efforts of both of them.”

And Webb praised the groundwork his predecessor, Peña, set for his entry as mayor.

“When Secretary Peña was elected Mayor, it was transformational for the city,” Webb recalled. “It changed the city’s dynamic.”

The three leaders shared their biggest challenges in office, wisdom for students seeking leadership roles and the importance of character—something DU prizes as part of the 4D Experience.

“What I’m most proud of is the people development,” Webb said, mentioning former employees who went on to become leaders with the Girl Scouts, Kansas City government and other entities. “The legacy has gone on through the individuals, not the permanent brick and mortar projects that stand. Buildings come up and buildings come down, but the investment you make in people lives forever, and it lives through generation to generation.”

Hancock cited his current challenges as the spread of disinformation, especially related to the COVID-19 pandemic, and the fierce divide in politics. He shared his advice for civil discourse in a troubled time.

“It’s not what you say … it’s how you deliver the message,” Hancock said. “I think it’s important for us to be good listeners, honor the people, to understand that the approach does matter, and never forget to keep your focus on why you are there in the first place.”

Hickenlooper said he faced that challenge with active listening and creating space and trust for those conversations.

“DU is a safe place where people can express their opinions in a civil environment,” the senator said, remembering a panel DU convened on water use years ago when the topic was contentious.

As the three shared stories with Haefner about their time in office, they also looked to who might be Denver’s next mayor to join them at future homecomings.

“I think the possibility of a woman being elected mayor in 2023 is a very real possibility,” Hancock said, without naming names.

To wrap up, they cited movies that inspired them as leaders.

Hancock said “Black Panther” dealt a strong message on use of power.

“It has a focus on humanity and wisdom toward humanity and the philosophy that just because you can, doesn’t mean you should,” he said. “The same thing with the United States of America and the same thing with leadership. We have an awful lot of power here…but the integrity comes with how do you strategically and thoughtfully execute your duties without losing the integrity of humanity.”