It’s hard to deny the beauty of the University of Denver campus. From the architecture of the buildings, to a landscape that blends old and new, to the art that brings it all together, the campus was designed and has been transformed to meet the needs of a 21st century education.

Throughout the 125-acre campus, many subtle architecture and art installations often go unnoticed, their stories relegated to the archives. The DU Newsroom has put together a short list of some of these quiet treasures, in the interest of making your next visit to campus all the more interesting. 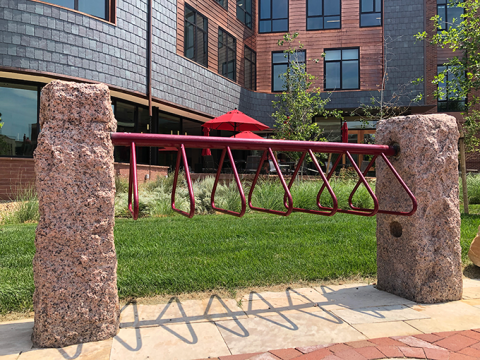 One of the newest buildings on campus, the Burwell Center for Career Achievement has a few fascinating features that easily can go unnoticed. Outside the building’s main entrance, an unassuming bike rack offers cyclers a convenient place to chain their vehicles. However, the rack itself is supported on both ends by granite pillars that once stood outside of University Hall. In the 1800s, the pillars served as hitching posts for the primary mode of transportation at the time — horses. 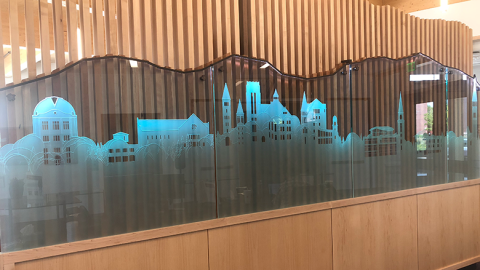 Inside the Burwell Center behind the front desk sits a unique piece of art. A model of the entire campus is made to scale out of glass. The primary east-west streets that divide campus — Iliff, Evans and Asbury — also divide the artwork. Behind the glass are multiple slats of wood that depict the mountain range directly west of campus. Two of the slats are stained darker than the rest; one represents Mount Evans and the other Echo Mountain, which is owned by the Burwell family. 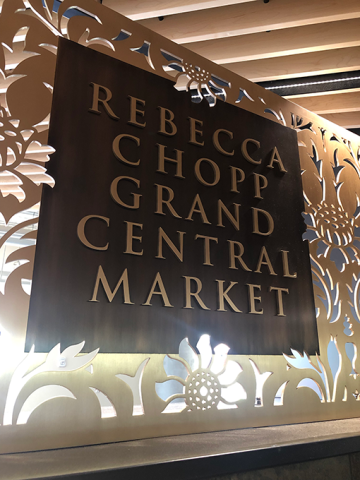 Two other newer buildings on campus offer a tribute to the University’s 18th chancellor, Rebecca Chopp, who led the institution when it unveiled the Denver Advantage Campus Framework Plan, which spurred construction of three new student-focused buildings on campus. Chopp was born and raised in Kansas, and to honor her roots in the Sunflower State (so named because of its official state flower), two campus art pieces depict the tall, bold-faced  symbol of late summer. One is located in the entrance to the DU Administrative Office Building (AOB), and the other is located in the Rebecca Chopp Grand Central Market in the new Community Commons. 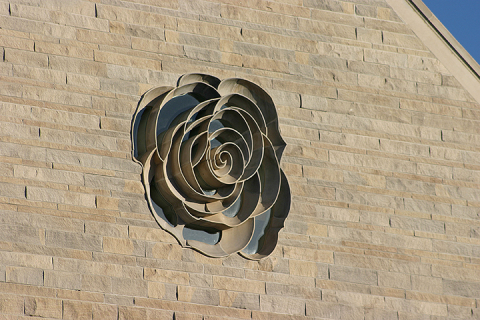 Flowers, as art, are common across the DU campus. On the west side of the Newman Center for the Performing Arts is a large rose window that faces the mountains. Cab Childress, university architect when planning began for the Newman Center, had returned from a vacation to France, where he had toured any number of cathedrals with exquisite rose windows. He decided he wanted the building to include a window that would represent the rose given to performers at the end of a show. Current university architect Mark Rodgers found a rose on the north side of campus that was ultimately used for the window’s design. 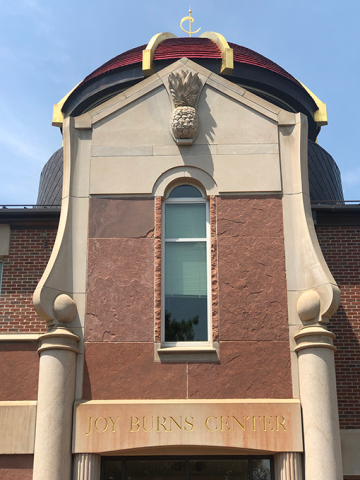 Fruit is also common in some of the art and limestone reliefs found around campus. The east and west entrances to the School of Hospitality Management are topped by large limestone pineapples. Centuries ago, the exotic fruit was regarded as the centerpiece for any festive meal. The pineapple has now become a widely recognizable symbol of hospitality.

The exterior of the Daniels College of Business features several limestone reliefs, funded by former DU trustee Scott Reiman. Carvings of a bull and bear, recognizable symbols of the stock market, grace the exterior and represent the study of finance. In honor of Reiman, a limestone grapevine protrudes from the exterior trim. It features tiny hexagon-shaped grapes, calling to mind Hexagon Investments, which Reiman was president of at the time. 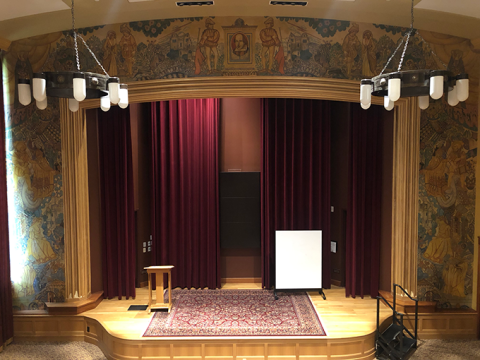 The Reiman Theater, inside Margery Reed Hall, had its own little secret for nearly 80 years. When the building was constructed in 1929, Denver artist John E. Thompson was brought in to create the Shakespearean mural that everyone can see today. However, 18 months after the building’s debut, the mural was painted over and then forgotten until it was rediscovered in 2006 ahead of a renovation. Dan Jacobs, then curator of the DU Arts Collection, raised the funding and worked for years to restore the mural. 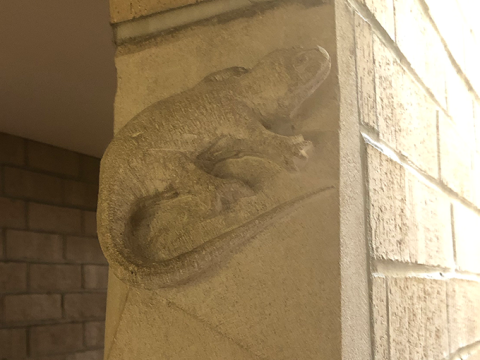 Across the campus, there are several less known and almost hidden displays of creativity. One example is the limestone lizard located in F.W. Olin Hall’s back staircase. It comes from a medieval tradition of incorporating a representation of a church mouse in church architecture. This tradition was updated in Olin to depict a chameleon, a reptile commonly used in scientific research. 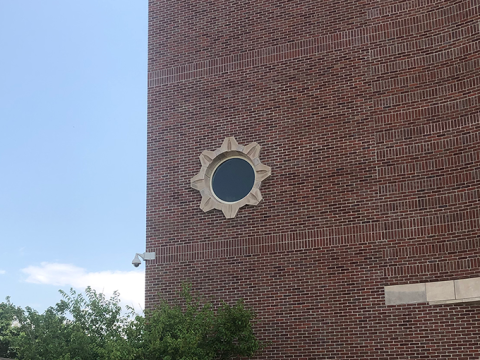 Next door, in the Daniel Felix Ritchie School of Engineering and Computer Science, one of the north-facing windows is shaped like a gear. Inside, a display featuring gears acknowledges many of the donors who helped make the building’s construction possible. The socket wrench that operates the gears is from the toolbox belonging to the school’s namesake and father of the University’s 16th chancellor, Daniel L. Ritchie. The toolbox itself can be found on the lower level of the building. 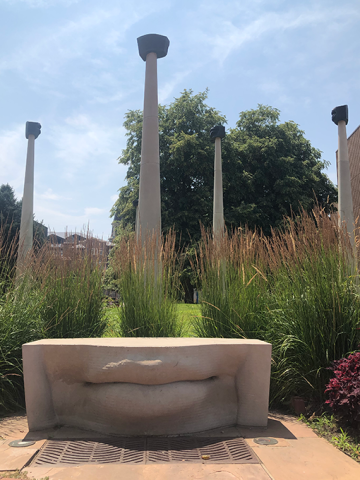 One art installation outside the Ritchie Center for Sports & Wellness always invites questions and speculation. “Whispers” was created by the late Lawrence Argent, an internationally renowned sculptor and former professor in DU’s School of Art and Art History. (In Denver, he’s best known for “I See What You Mean,” the sculpture of the big blue bear outside the city’s convention center.) “Whispers” features five sets of human lips in bronze. Each set rests atop a towering pillar, and the pillars form a circle, so that they appear to be conversing. Then, four limestone benches, also shaped like human lips, are positioned over a below-grade device that plays pre-recorded discussions. A discussion is triggered whenever someone sits on the bench. The sculpture is intended to engage passersby and to reflect the many conversations that occur in an institution dedicated to exchanging ideas and knowledge.