After a military career, Josh Francis pursue a master's in forensic psychology

After spending 12 years in the U.S. Army, Josh Francis decided he was ready for a change. His responsibilities during his military career were diverse. He had studied at an Arabic language-immersion school, written policy papers for senior military and diplomatic personnel, and led a team that interfaced with Afghan officials, but Francis says he knew he was putting what he truly wanted to do aside. 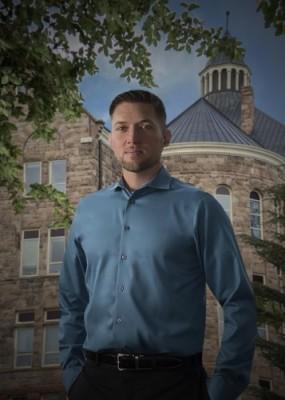 “I’ve always been interested in psychology since majoring in it as an undergraduate,” he explains, “and specifically in forensic psychology.” He decided to come to DU’s Graduate School of Professional Psychology (GSPP) because he was especially drawn to the quality of its faculty.

Forensic psychology is a multifaceted specialty that can involve several roles, from clinical practice to providing testimony in court. Francis has already experienced many of those responsibilities, thanks to field placements required by GSPP.

He worked as a deputy probation officer during his first year doing competency restoration. “Competency restoration is initiated when a person who is arrested and goes to court struggles to interact or understand what’s happening,” Francis explains. “At that point, the judge will ask that they be evaluated. If they’re found incompetent, they go through competency restoration where they learn the basics of the law and their rights.”

This year, he has worked with inmates at the Arahapoe County Jail. His job involves conducting mental health evaluations and recommending patients who might benefit from medication to treat their mental health issues.

Francis considers the field placements a highlight of his two years at GSPP. “Gaining the practical knowledge and exposure to different mental illness presentations while working in different settings has given me great experience moving forward in my career,” he says.

In addition to those placements, Francis has worked as a clinic assistant at the newly established Sturm Center, which provides behavioral health treatment for veterans, service members and their families. Because he may work with veterans in the future, he appreciates being part of the center at its founding.

“It was neat to come in at the ground level and help establish the clinic. Seeing how all of the systems get put in place gave me a good foundation and instruction on how to run a clinic or private practice,” he says. “Of course, I also appreciated being involved in the Sturm Center’s endeavors to serve military veterans and their families in the community—it’s a cause near and dear to my heart.”

After he graduates in June, Francis plans to enter a PhD program at Sam Houston State University to continue his studies in forensic psychology. He’s particularly grateful to the faculty at GSPP, especially Neil Gowensmith and Kim Gorgens. “Both are passionate about their work and take a genuine interest in their students’ success. They have challenged me to take the lead and be creative as I pursue my educational and career goals,” he says.

Francis has just one complaint about his time in GSPP. “I have only been limited by the amount of time available in a given week to take advantage of all the amazing opportunities I’ve been offered here,” he says.