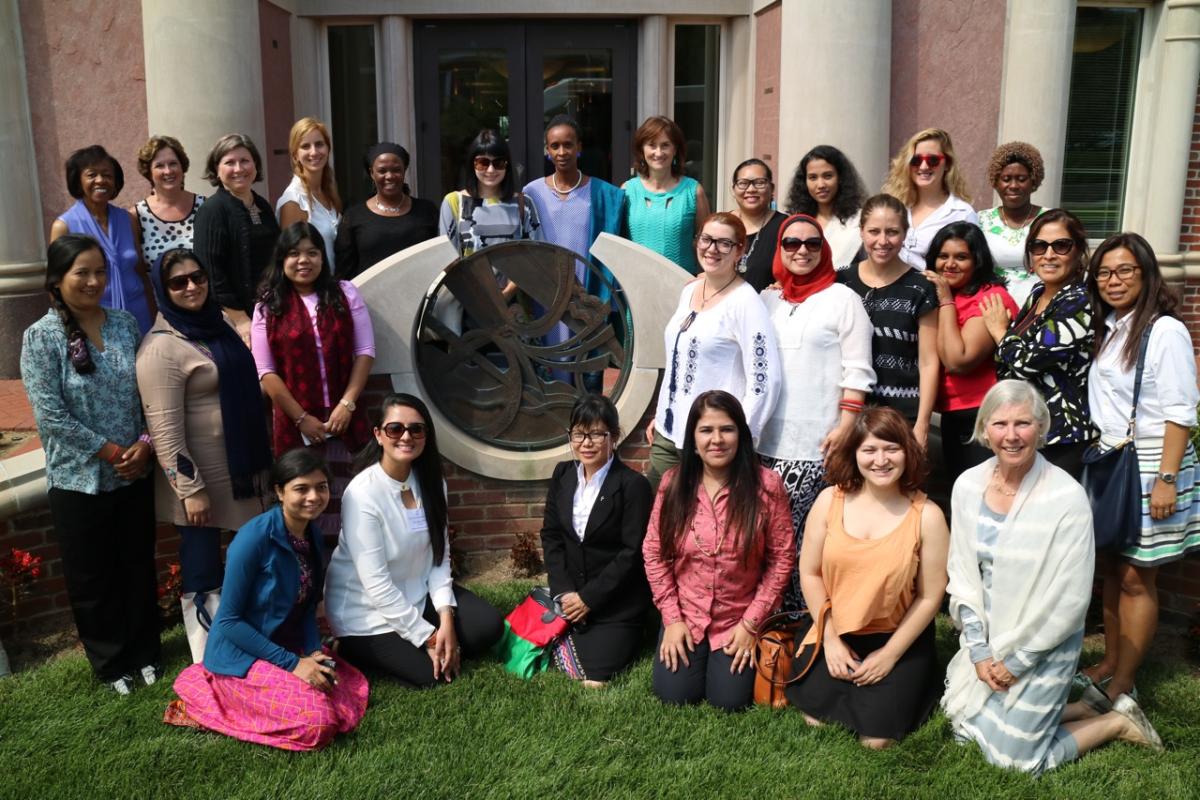 22 women from countries across the globe—including Afghanistan, Rwanda, Pakistan, the Philippines and more—convened at the University of Denver’s Colorado Women’s College Aug. 3 for what at its core was a worldwide women’s networking event, but with a twist. During a panel discussion on women’s career development, the audience shared perspectives on women’s rights in countries torn by extremist factions and rebuilding after being decimated by genocide; some wondered how world leaders such as the United States interpret and are addressing women’s issues around the globe.

DU’s Colorado Women’s College (CWC) hosted the women for a full day of activities, including a tour of the Chambers Center for the Advancement of Women, discussion of CWC’s new strategic initiatives under consideration now that it no longer is a degree-granting institution, and an afternoon business panel discussion.

Linda Olson, interim CWC dean, said this was the third time in a year that the international visitors program came to Colorado Women’s College at DU. “We’ve gone from simply providing event space to conducting programs on worldwide women’s issues,” Olson said. “This fits perfectly with the future we envision for CWC, including initiatives such as a women’s leadership institute, a resource center dedicated to the advancement of women and collaborative research on issues of gender equity and inclusivity.”

The visit was part of the U.S. Department of State’s International Visitor Leadership Program through WorldDenver, which for more than 75 years has brought foreign leaders in a variety of fields to the United States for three weeks of professional exchange that fosters relationship-building and helps strengthen U.S. engagement with countries around the world. Visits are planned around one of several themes, such as civic education, democracy, entrepreneurism, human rights, and women’s leadership. U.S. embassies select program participants based on the theme, tapping individuals who are leaders in these areas in their countries.

The international group visiting DU focused on the role of nongovernmental organizations (NGO) in promoting global women’s issues. Denver was the last stop for the group, which also spent time in Washington, D.C., Boston, Manchester, N.H., and Kansas City, Mo.

It was during the panel discussion on women’s career development that the women brought forth the in-country challenges they face due to cultural norms, geopolitical unrest and societal pressures. Olson moderated the panel, which featured women representing civil society, nonprofit, entrepreneurial, technology and philanthropic sectors.

Discussion revolved around common themes such as the nearly universal societal norm of women as primary caregivers to children, the need for women who achieve in their fields to bring along the next generation of women leaders, and whether merit or quotas are best to advance women.

The “pay it forward” idea may be the enduring message from the day spent at DU. Whether it’s career advancement—something Carita Watson made sure she did for younger women of color when she rose to executive level at IBM and saw little diversity—or thoughts on managing the risks of simply practicing your profession, a reality shared by the visitor from Afghanistan who is a journalist back home—bridges formed between the women in the room. As Watson put it, “We need to fix what’s wrong regardless of the backlash we may get.”

Cooper shared that her organization is working on an app that provides a secure internet platform for women worldwide to share issues and ideas on managing their lives and careers. Something like this, she said, could be useful to the Afghan journalist, and is one example of women helping women as part of a global movement. She acknowledged that American women can do better at using their collective power to influence U.S. support for human rights in war-torn countries, and pledged her support.

The day ended in typical networking fashion, with business cards being exchanged. Yet the seeds sown for future connection and cooperation are likely to go beyond the classic professional exchange.