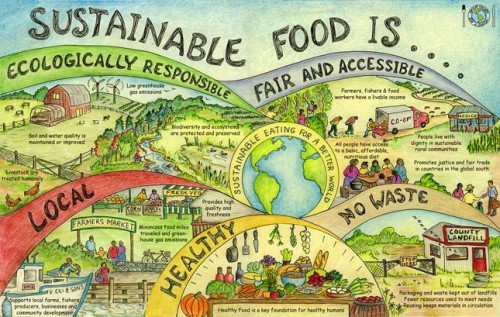 Over the past few years, the push for more sustainable, local food has become a movement in America. From organic vegetables to fair trade coffee, consumers’ demand for better food has been on the rise. The movement also has put local farmers back in the spotlight, with many consumers and businesses shopping for products that are produced locally. That — in turn — can help local economies.

The move toward a food revolution is not being led by just soccer moms and hipsters. Students at college campuses across the country are making their voices heard by demanding their institutions work harder to source locally, sustainably and responsibly. The University of Denver is no exception.

The goal of the challenge is for each institution to be serving at least 20 percent "real food” by 2020. The challenge defines real food as food that “truly nourishes producers, consumers, communities and the earth. It is a food system — from seed to plate — that fundamentally respects human dignity and health, animal welfare, social justice and environmental sustainability.”

At the time DU joined the challenge, Sodexo — the University’s food service provider — was serving 4 percent real food. Since then, Sodexo, DU’s Center for Sustainability and the Sustainability Council have worked diligently to raise that number, which as of 2016 stood at 14.75 percent.

“The Real Food Challenge sets a goal and provides clear metrics to identify local and sustainably certified food,” says Chad King, director of sustainability for DU. “This is one way of encouraging changes toward sustainable procurement that can be clearly communicated." Local is defined as food that is grown, processed and distributed within a 250-mile radius of DU.

Real food, King says, falls into all categories, including coffee, tea, beef, lettuce and more. In fact, nearly all of Sodexo’s private-label brand Aspretto — made up of coffee and tea — is fair trade, organic or shade grown. Additionally, Sodexo sources as many local products as possible, including lettuce from Petrocco Farms in Brighton and tortillas from Raquelitas in Denver. While Sodexo serves real food in all of its locations, the focus of the Real Food Challenge has been in residential dining halls.

“Sodexo responded to student interest and demand for real food by signing the Real Food Challenge with the University. As our food service provider, they continue to work toward the goals in the commitment,” King says. “We started at 4 percent, and we’re working on the final numbers for fiscal year 2017, which look to be close to 19 percent.”

While the move to local and real food has seen success thus far, it is not without its challenges. Two of the main challenges associated with the Real Food Challenge are cost and weather conditions in Colorado, with the latter making it difficult to source some products on a year-round basis.

“Limited rainfall in Colorado makes certain types of agriculture difficult. For example, the Real Food Challenge doesn’t count meat or dairy from concentrated feeding operations. However, there is not enough rainfall to support grazing for organic cattle production, [which requires] cattle to be confined and fed,” King says. “Obtaining consistent quantities of food from local sources can also be difficult, especially given seasonality and the fact that the majority of the time the University is in session is after the growing season ends.”

Serving more local, sustainable food also increases costs — which, so far, have been entirely absorbed by Sodexo without being passed on to the campus community. Sodexo estimates that it spends between $10,000–$11,000 more per month for local and sustainable food products. This has increased Sodexo’s yearly costs by approximately $100,000.

“For me, as a Sodexo employee, it was not a difficult decision to become a signature participant in the Real Food Challenge,” says Ira Simon, resident district manager for Sodexo. “It mirrors Sodexo’s goals as outlined in our Better Tomorrow Plan: Improve the quality of life for our customers and employees; create a culture that reflects and enriches the communities we serve; and foster a culture of environmental responsibility.”

The partnership between Sodexo and the University has been a strong one, but King admits that surpassing goals above 20 percent may be difficult without increasing costs to the consumer.

King says students have noticed the change in the dining halls and are appreciative that the University is taking part in this type of procurement. Given that the focus has been in residential dining, the rest of the campus community may not be aware of the University’s additional efforts toward food sustainability.

Issues around food sustainability are far reaching and impact all of us, King says. Those include the contribution of carbon emissions to the atmosphere; nutrient runoff from fields as a result of industrial agriculture which leads to an oversupply of nutrients in waterways and soil loss; and large monoculture agriculture causing habitat and biodiversity loss.

“Local and sustainable food production can address many of these issues,” King says. “In addition, local food procurement makes a larger, local economic impact, keeping more money and jobs in the region.”