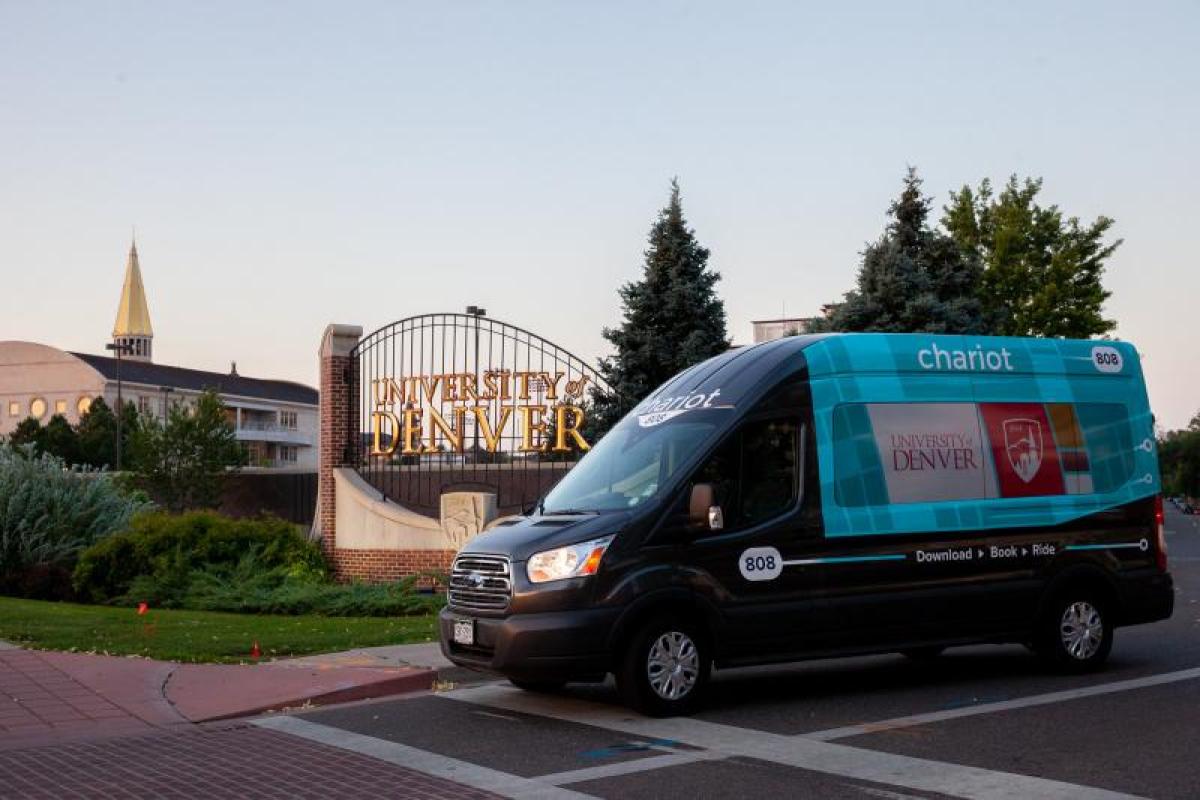 In a 2017 mobility study led by Transportation Solutions, the city of Denver imagined the University of Denver light rail station as a multimodal transportation hub for the entire area, complete with plenty of options to get riders that last mile to their destinations.

More than a year after the release of that report, the University has taken great strides toward bringing that vision to reality — and to meeting its own sustainability goals, outlined in its strategic plan, DU IMPACT 2025.

It started with ofo. The dockless bike-share pilot program first landed on campus in spring 2018 and concluded its ride in December. In its first month serving DU, ofo saw 35,000 rides. Chad King, DU’s sustainability director, calls the program a successful introduction to the world of multimodal transportation.

“We helped pilot the program for Denver, and have watched the whole industry change. Now we have more options for dockless mobility permitted by the city,” King says, noting the prevalence of new multimodal additions like electric scooters and e-bikes.

Shortly after the ofo launch, DU contracted with Chariot to pilot its microtransit shuttle, which is available to students, faculty and staff at no cost to riders. Over the course of fall quarter, the number of Chariot riders increased steadily, reaching a peak of 120 rides per day in the final week of the quarter.

Given its early success and pilot status, the DU Chariot program has plans to expand. Already, Chariot has added a paid charter service, allowing faculty to take small classes off campus for field trips. In addition, the city of Denver is now piloting Chariot as a public service. The program, called City Shuttle, offers a new Chariot route from the Civic Center transit station to Cherry Creek.

In light of results of a recent survey of DU Chariot riders, changes may soon be coming to improve the Chariot experience. Early next year, DU will consider a range of improvements including later hours, more stops and opening the service to the public.

DU’s mobility goals have also been boosted by the presence of four parking spots for car-sharing vehicles from Car2Go. Two are located in parking lot 306 near Nagel Hall, while two others can be found in lot 304 near the Mary Reed Building.

Although electric scooters are not currently allowed on campus, King notes that students nonetheless find them a great option for getting around town in a more sustainable way. “As the dockless mobility industry pivots, we are trying to figure out how best to create a safe multimodal environment on campus,” he says. “Students love the scooters, and are using them for lots of trips around campus. We encourage them to be used on city sidewalks according to city ordinance.”

While such options as Chariot, Car2Go and electric scooters are fun and convenient, they also serve an important role for the University as it works toward its 25 sustainability goals for 2025, and DU IMPACT 2025’s call for a more sustainable campus. These goals include reducing single-occupancy vehicle commutes to fewer than 40 percent of total trips, eliminating the need for students to have cars on campus, and reducing carbon emissions by 45 percent.

If recent survey results are any indication, new multimodal transportation options have had a significant impact. For example, just 26.5 percent of trips to campus were made alone in a vehicle, according to responses from students, faculty and staff. And nearly 23 percent said they commuted via bike, bus or light rail.

Because, as King notes, just over 13 percent of the University’s carbon footprint can be attributed to commuting, reductions in the use of vehicles could make a significant difference. “We’re providing options so students do not have to bring a car to campus, and we want to reduce our drive-alone rates, which will improve neighborhood congestion, parking demand and our carbon footprint,” he says. “As DU becomes a multimodal hub we will increase convenience in commuting, while addressing our broader sustainability goals.