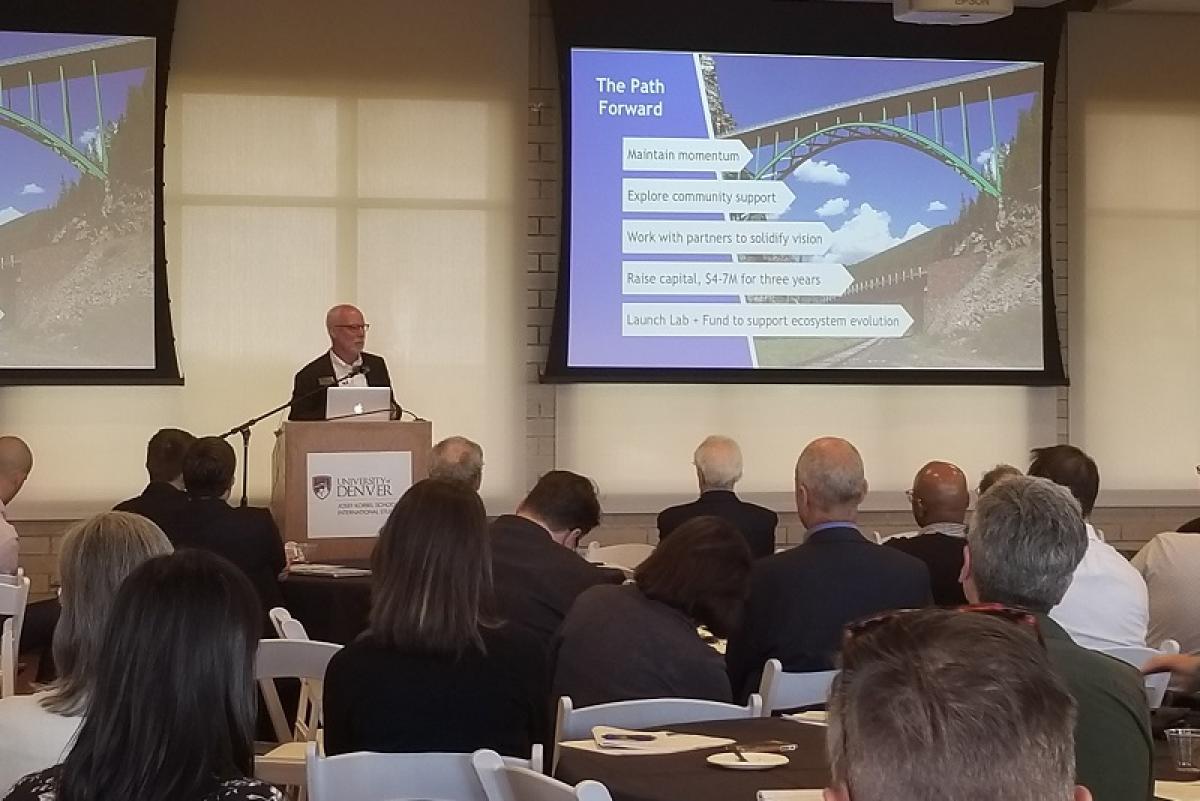 After three months of intensively surveying the current state of journalism, the Colorado Media Project (CMP) can do some reporting of its own.

The bad news, perhaps unsurprisingly, is that the news business is struggling and likely will continue to do so.

But the good news, according to JB Holston, dean of DU’s Daniel Felix Ritchie School of Engineering and Computer Science, is that a collaborative community group is ready to come to the rescue.

The CMP is a joint effort from the University of Denver’s Project X-ITE, the Gates Family Foundation, the Boston Consulting Group and others. Since June, the group has sought a viable business plan for the struggling journalism industry, as well as a prototype of a way to dispense news to an increasingly screen-staring populace.

Under the auspices of the CMP, Holston said, “we got a really broad group of constituents around the table to talk positively about innovation in media instead of just worrying about what’s not here.”

Many of those constituents gathered on campus at the Anna and John J. Sie International Relations Complex on Sept. 24, as Holston and other CMP leaders presented the results of a summer study. In the audience, Lynn Schofield Clark, chair of DU’s Department of Media, Film and Journalism Studies, looked on with optimism.

“I think there are a lot of people in the University system who are encouraged by the possibilities that we have today with our chancellor and people around campus like Dean Holston,” said Clark, who lent her expertise and some of her students to the project. “[They] want to try to say ‘we're doing interesting things at the University of Denver, but what can we do that can make a difference right now, right away and address things that are of immediate concern?’”

Potential solutions on display: four prototype apps to deliver the news people want in an accessible and enjoyable format. Imagine, for example, an app that curates news based on the user’s geographic location or a Tinder-style swipe-centric program for quick access to content of interest.

A cool new app, however, is just one component among many leading to what the CMP expects to be a difficult, years-long transition to an improved news-sharing environment. That transition would be aided, Holston said, by the creation of a hypothetical Colorado News Lab and a Colorado News Fund. The lab would be a model of partnership, teaming members of the media with innovators and backers. Together, they would build a network to reach new audiences, grow business and identify ways to improve. The fund, meanwhile, would operate independently and would work to galvanize philanthropic support for Colorado journalism.

“An innovation lab can test new ideas and also test new business principles underpinning those ideas,” Holston explained. “I want to get that funded and moving as rapidly as we can.”

Though the audience for every major sector of U.S. news media — newspapers, cable news, local television news and digital news — shrunk in 2017, the CMP found a substantial portion of Coloradans are interested in their news product. And although trust in national mass media has reached an all-time low, Coloradans are much more satisfied with their local operations and, in many cases, are willing to pay for them. 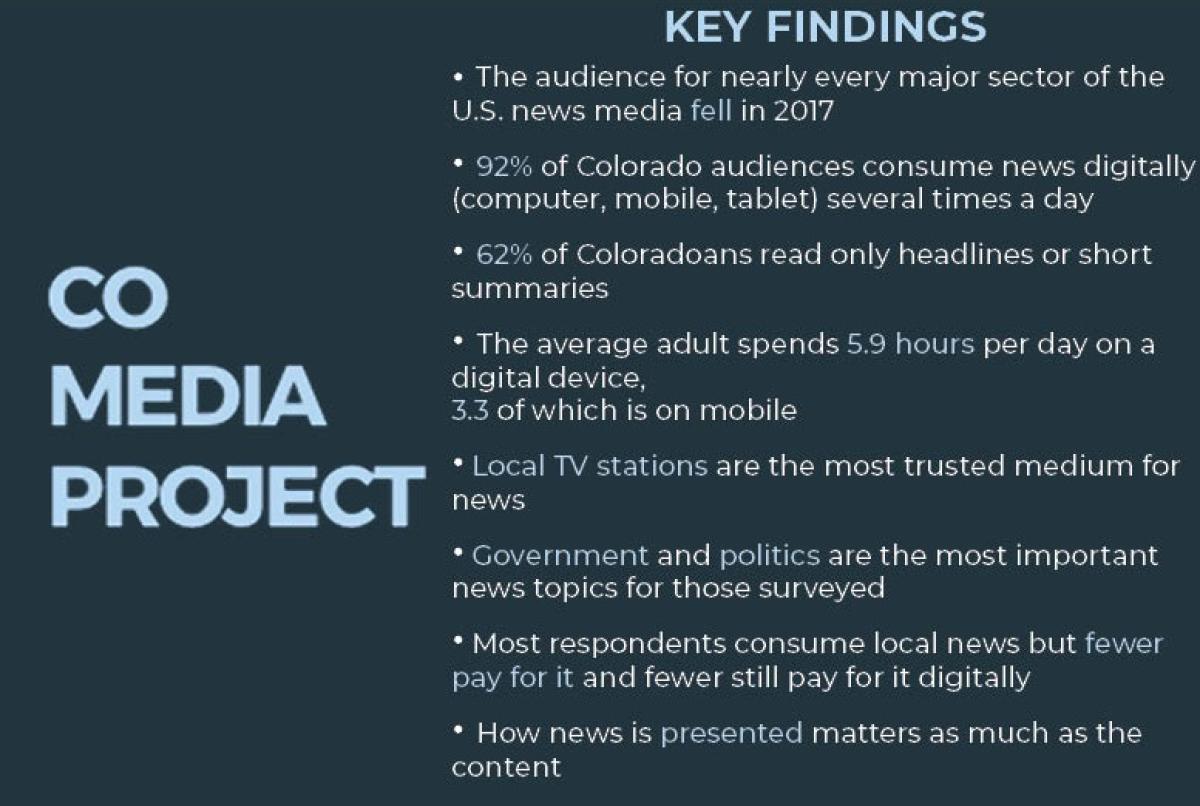 To make that content more accessible, the CMP tasked student startup Cultivo with creating a medium more suitable for today’s consumer trends — for example, 92 percent of Coloradans use a digital device to consume news, and nearly 60 percent read only the headlines. The process began with “human-centered design” forums, engaging the community in discussion and working together to find solutions. Colorado residents joined experienced journalists, media professionals and students to brainstorm, while Scott Romano — a DU junior and Cultivo’s CEO — and his team listened with interest.

“We’ve always had that aspect of engaging with the community to see what was going on,” Romano said of his company, initially founded to help small local businesses affordably build websites. “The Colorado Media Project was such an interesting way to engage the broader purpose. … To take on a client like this that has a social good aspect to it, we’re helping innovate to create a more educated citizen populace.”

Holston, for one, loved having Cultivo involved. “That is one of the things that is the most fun and exciting about the project,” he said. “Having a team of students use that human-centered approach to go into the community and come up with ideas from an entirely different point of view, I thought, was really, really cool.”

The students impressed Clark, too, particularly in the way they presented to seasoned industry professionals and the way they embraced the cross-disciplinary work.

“We [in academia] are training people for what we know now and they are going to have to be able to be prepared for what's going to happen in the future,” she said. “That means working as part of a team and trying to be problem-oriented and thinking about solutions they can work toward together.”

The CMP’s next task, Holston said, is to take the conclusions to the community and garner support for a resource he views as just as essential as infrastructure and transit. It is critical, he said, to maintain the group’s momentum, particularly, if the CMP is to raise $4 million to $7 million — an amount estimated to support three years of intended work.

Before the CMP began its work, the discussion in the community was pessimistic, Holston said, particularly in the wake of devastating cuts to the Denver Post. But last week, he noted a visible increase in optimism and inspiration, as the pace of innovation picks up.

“We got so many different groups saying, ‘this is pretty cool, this is stuff we can do, this is exciting,’” Holston said. “I think that is a big accomplishment.”