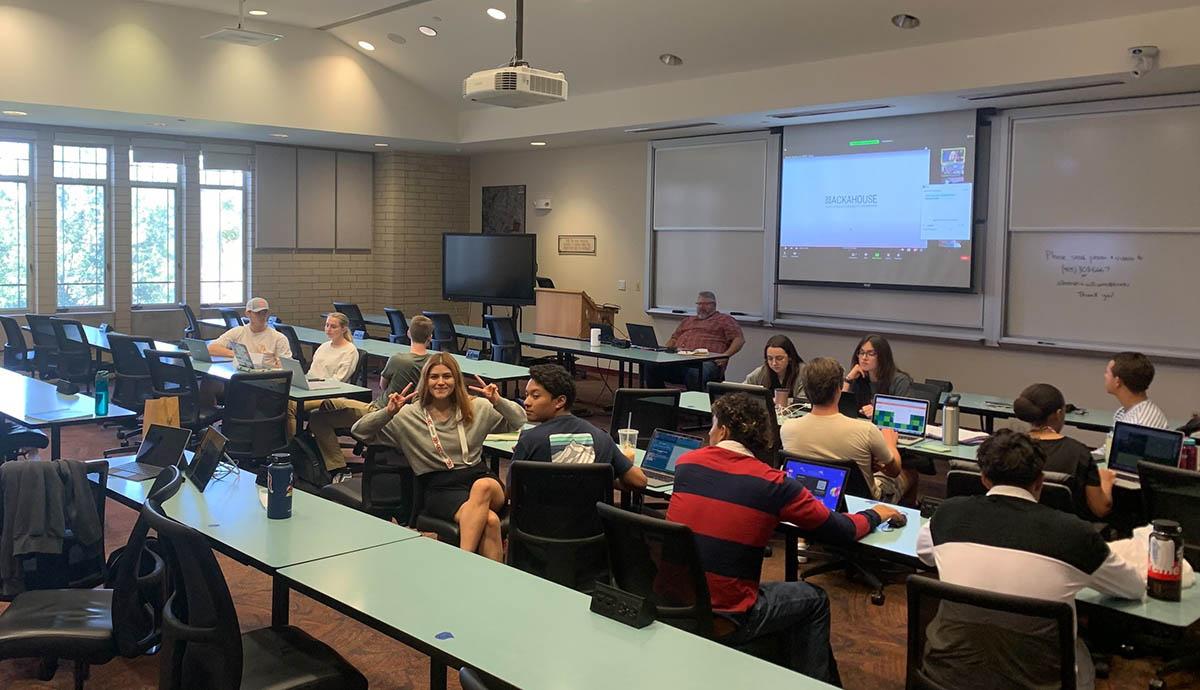 Nicandria Nungaray manages rental properties when she’s not in class, but juggling school and real estate isn’t new. She’s had five years to perfect the balance.

At age 14, under the supervision of her mother, real estate investor Maricela Nungaray, she took charge of property management.

It’s not a typical job for a teenager. But ultimately, it became no big deal.

“I would show the properties. I picked out several tenants. From that, I learned from my mistakes.”

It was Maricela’s livelihood, but the lessons learned by her children proved to be of greater value.

“My mom was like, ‘I’m OK with losing money if it teaches them how to work.’ In a way, you mature a lot faster.”

By 15, Nicandria felt more confident. And at 17, she brought that confidence with her to the University of Denver Burns School of Real Estate.

She is one of 17 DU students who joined four teams to participate in Ivory Innovations’ fourth annual Hack-A-House competition - a first for the University.

As the clock struck noon on Friday, Sept. 24, the virtual competition began.

Without the flair of a reality TV show, the contestants received their task: Create a viable solution to make housing more accessible.

They got to work, mindful of the 24 hours on the clock.

Ivory Innovations, housed at the University of Utah’s David Eccles School of Business, leverages stakeholders to find solutions to the affordable housing crisis.

In 2019, 37.1 million households, nearly one-third of households nationwide, were considered housing cost-burdened, meaning they spent over 30% of their income on housing, according to Habitat for Humanity.

Exacerbated by the ongoing coronavirus pandemic, the affordable housing crisis has surged.

“It’s one of the most pressing challenges in real estate,” says Eric Holt, assistant professor at the Burns School.

Affordable housing is a key component of programs at the school named for Franklin Lane Burns. He was one of the first builders to bring affordable housing to lower-income families and returning World War II veterans.

Karima Simmons, a graduate student in the Burns School, grew up around family members in real estate and construction. They all had one thing in common. “They were all men.”

But Simmons believed she could do that too, and she did. First she renovated her home in the Washington, D.C., area.

“Eight months ago, I was just playing around in carpentry. Now, all of a sudden, I’m in grad school for construction management,” she says. “It’s not what I expected, but I am happy I tried.”

Her team, Pio House, unveiled a plan to convert a hotel in Washington, D.C., into an affordable housing complex. They didn’t only want to give people a place to live; they wanted to create support services around housing.

“It was about the housing,” Simmons says, “but also, how do you support the residents in other ways?”

Nicandria’s team, Vision 5280, focused on racial injustice in housing, home instability due to COVID-19 and sustainability in the Montbello and Green Valley Ranch area.

Three of the five team members are from those neighborhoods, so it was personal.

Montbello is one of Denver’s largest, oldest and most diverse neighborhoods. The ungentrified area has a median household income of $73,000, Nicandria says.

Vision 5280’s focus on equality was twofold. In Montbello, zoning laws allow a homeowner to extend his or her house to create a rental unit in the backyard. But the team’s hope wasn’t simply to lower the homeowner’s mortgage. Vision 5280 wanted to partner with Impact Justice’s Homecoming Project of the Bay Area in California. It provides $25 daily to homeowners who house a formerly incarcerated people at an affordable rate.

“A lot of formerly incarcerated people end up homeless or return to jail because of the lack of resources and housing,” Nicandria says.

Since the program started three years ago, no one has returned to prison.

Traditionally, those who need affordable housing are sequestered from the general community. DU’s team BuildUp wanted to change that.

“For those who need it, they can buy into this co-op model. Every hour (of work) is X percent of a discount of X per week,” Jan Berland of BuildUp says.

Berland, passionate about sustainability, hopes to design buildings that benefit the residents, not merely the investors.

“At the root of my interest with sustainability is helping people,” he says. “You’re providing a service to the public, to the Earth and future generations.”

Although the DU teams didn’t place in this contest, their plans could merit further study.

When noon came the next day, the competition ended just as it started. No bells and whistles, just 37 teams - staring at a computer screen - ready to tackle new challenges.