DU Students Travel to Alaska for Lesson in Sustainability

Trip was part of course offered through Special Programs 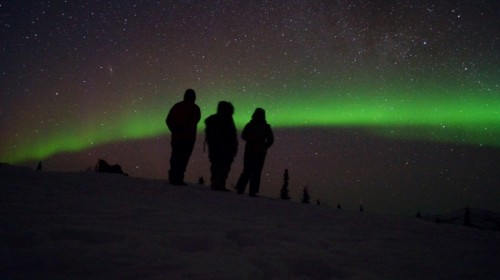 When you think of Alaska, “climate catastrophe,” “disastrous” and “sustainability” may not be the first words that come to mind — that is, until you travel there and witness firsthand the effect that climate change is having on the state often referred to as the land of the midnight sun.

A group of University of Denver students traveled to Alaska in March as part of “Sustainable Decisions: Alaska’s Iditarod Way,” an interterm course offered through DU’s Special Programs. These programs give students experience outside of the classroom, exposing them to ideas and cultures that go beyond the textbook. A variety of for-credit courses are offered between quarters.

“Faculty develop courses of interest with specific locations in mind. For some, it’s based on locations they’ve been to, research they’ve conducted or somewhere new they would like to explore,” says Shannon Jahn, interterm and special projects manager. “Once they develop the course syllabus, they then propose the idea to me and from there, as long as the locations are approved by risk management and Internationalization, the courses come alive.”

During the trip to Alaska, students were immersed in the study of sustainable decision making in Alaska and how it has affected the state’s current population, the rights and values of its indigenous people, and outside interests like oil companies. 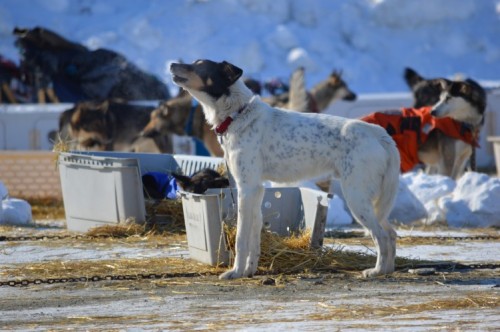 The trip also included visits to Anchorage, Fairbanks and Nome. Additionally, the group met with and spoke to educators and professionals in the private sector about a broad range of issues affecting Alaska.

Barbara Stuart, who teaches the course with her husband Ken, says students are exposed to a number of issues during the course. Their takeaways are not prescribed, she says, but rather are created based on their personal experiences from the trip.

“The Iditarod, Alaska's 1,049-mile dog sled race, is a perfect metaphor for organizational behavior and increasingly sustainable decision making. I grew interested in sustainability as it is playing out in Alaska, where the impacts of climate change are more obvious than in the other 49 states,” Stuart says. “There is no denying that villages are falling into the sea as the permafrost and sea ice are melting. These disasters carry heavy human costs.”

For DU student Nicholas Bither, who is majoring in geography with a minor in sustainability, the course was an opportunity to learn more about the ecological and social impacts of climate change. Alaska, he says, offered a unique and important view on both. He believes in the effects of climate change, which he says is a pressing issue — one that needs to be addressed quickly in order to avoid potentially disastrous impacts. His belief, however, became more of a reality after visiting Alaska.

“If anything, this course convinced me that the need to act is even more urgent than I may have believed before. For anyone interested in climate change, this [course] provides an incredible opportunity to study both the driving force and hardest-affected ecosystems and human populations, all in one relatively condensed area,” Bither says. “To many of us, the impacts of climate change are quite intangible. We know things are beginning to shift rapidly, but we haven’t yet felt any shifts in our own life and have not needed to adjust our lifestyle. This is not the case for many in Alaska.”

The Arctic region, he says, is the first place on the globe to feel serious climatological shifts. Indigenous communities, many of which rely heavily on subsistence fishing and hunting, are finding it hard to survive in the way they have for many generations because of the intense shifts that are taking place.

Positive steps are being made, Bither notes while recalling the group’s visit to the University of Alaska at Fairbanks, where they met with professionals from an organization called the Scenarios Network for Alaska and Arctic Planning. The company is compiling and processing scientific data in an attempt to aid Arctic communities in planning for a future in which the climate will continue to shift dramatically.

Students also met with Fairbanks city planners who showed them what the city is doing to improve the health of local waterways and other natural resources. Then there’s the Cheena Hot Springs, a resort where all power is generated geothermally, producing no greenhouse gasses, and most of the food is grown on site.

“We are currently on a path toward climate catastrophe — the only question now is how bad are we willing to let these problems get before we decide to act?” Bither says. “Sustainability needs to be the foremost factor in all fields going forward. Being able to see these communities, which are already suffering the consequences, brought this point home for me.”

Elaina Fenstermacher, who is studying strategic communications, took the course and saw the trip as an opportunity to immerse herself in another culture and learn more about the sustainable options that exist in Alaska.

“One of the biggest takeaways for me was becoming an active perspective taker. I think we all get caught up in the hustle and bustle of daily life and forget to look through the other side of the lens,” Fenstermacher says. “During our week in Alaska, I was told repeatedly that the lower 48 states tend to think they know what’s best for Alaska without ever traveling to Alaska. This course opened my eyes to different ideas of sustainability.” 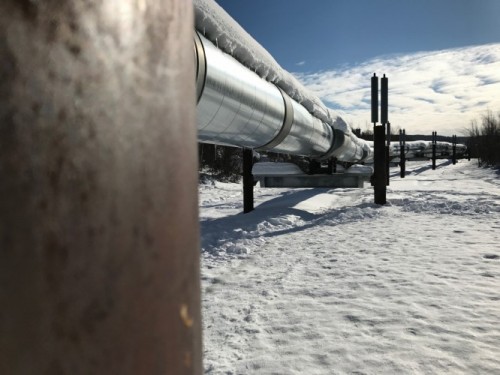 She says one of her favorite parts of the trip was hearing from Barrett Ristrope with Planning in Alaska, which is helping local tribes plan for the future in terms of jobs, economic stability and food sources. Fenstermacher also appreciated visiting the Alaskan pipeline and meeting families who have been working on the project for generations. While visiting with them she learned about its importance and how the pipeline keeps the state economically stable.

“Planning is a huge part of the overarching goal of sustainability,” Fenstermacher says. “After taking this course, I believe that education and awareness are the only way to reach sustainability.”

Fenstermacher believes there is more to sustainability than meets the eye. Addressing the issue, she says, will allows us to enjoy some of the things we take for granted, such as the mountains of Alaska, wildlife roaming the land and the Northern Lights that help add beauty to the night sky.

“Sustainability is more than just recycling plastic, turning off the lights when you leave your house and investing in electric cars. Sustainability and sustenance is what Alaska is working toward,” she says.

To learn more about the courses offered through Special Programs