For years, it’s been a battle to get the University of Denver on the map for college lacrosse. It wasn’t until 2015 that DU men’s lacrosse finally became the first team west of the Mississippi to win the national championship. Now the women’s team believes it’s their turn to make some noise in college lacrosse.

The Pioneers are coming off a season where they made the NCAA Tournament for the first time in four years and reached the second round of the tournament for only the third time in program history. They now enter 2019 ranked in the top 25 in the country and are projected to finish first in the Big East Conference.

“I like that we are getting the pre-season respect from both the other coaches and the media,” says head coach Liza Kelly. “Now we have to put our money where our mouth is and get busy with some games.”

Kelly, now in her 12th season as head coach, has never had a losing season at DU and has led the program to all three NCAA Tournament victories. Her message to the team this year has been simple: had they won just three more games last year, they would have been playing for the national championship.

“We’ve always fostered that idea that we have to do more, we have to take that extra step,” she says. “I think that as long as you always stay hungry, that next step — whether it’s a conference championship or a national championship — it’s only going to come if you do better.”

DU opens the season this weekend with games at Stanford and the University of California-Berkeley. The difficult matchups don’t end there, with at least four more ranked opponents on the schedule, including No. 5 Stony Brook. The Pioneers believe they are ready for the challenge.

“I think that we are even stronger this year,” says Lanuza. “The past few weeks all we’ve been doing is playing each other, so finally having the opportunity to play someone else will be great, and we are excited to get the season started.” 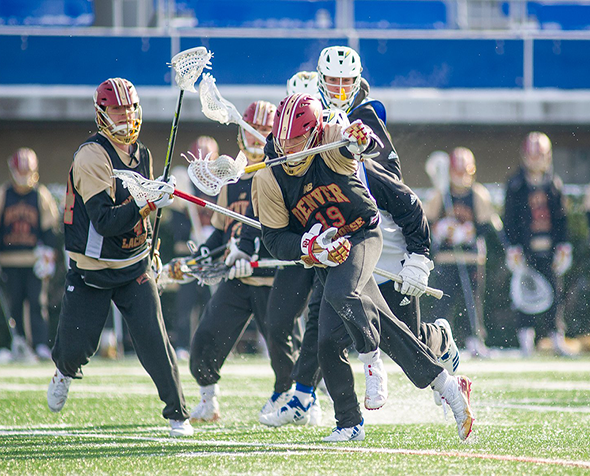