Team is learning to adjust to life after Trevor Baptiste

For most college programs, a No. 8 national ranking would be considered an honor. However, for the University of Denver men’s lacrosse team, the preseason ranking could be viewed as disrespectful. It’s their lowest preseason ranking in six years.

However, the one player not back this year is the student-athlete who left college lacrosse as the sport’s all-time best faceoff man — Trevor Baptiste.

“It seems the rest of the country thinks that we don’t have anybody coming back,” says head coach Bill Tierney about the preseason ranking. “Obviously losing Trevor is a big loss for us, but we’ve got a lot of experienced players back. Certainly, in my history of coaching, when you have a great senior class that’s played a lot for you, you’ve got something going, and we feel that way this year.”

The team knows the narrative will continue to be driven by one data point: “How are you going to win games after graduating a player who won more than 71 percent of all faceoffs?”

“We have to move on because he’s not here anymore,” says sophomore Jack Hannah. “Pretty much everyone who had been around him learned a lot from him, so you still feel the impact that Trevor had on the program. We will have to move on and adjust.”

The process of moving on begins this weekend, when the Pioneers host in-state rival Air Force at Peter Barton Lacrosse Stadium on the DU campus. Their adjustments begin with knowing they might be on defense a little more this season.

“When Trevor was out there, we had the mentality that he was going to win all the faceoffs,” Gaines says. “Now we have to change the mentality and know that we are going to be on defense more, and we are looking forward to it. Having the goalie back and having three starters on defense back is huge.”

Their schedule this season is once again chock full of top-20 programs — Duke (No. 2), Notre Dame (No. 10), North Carolina (No. 14), Ohio State (No. 15), Princeton (No. 17), Georgetown (No. 18), Marquette (No. 19) and Villanova (No. 20). The Pioneers will only face two of these opponents at Peter Barton. “To be the best we have to play the best,” Tierney says about their challenging schedule. However, at this point, the team knows all the rankings don’t mean anything.

“Every team is equal at this point in the season; no one has really done anything,” Gaines says. “I think people are right to question us a little bit because we do have to figure out how to play without Trevor.” 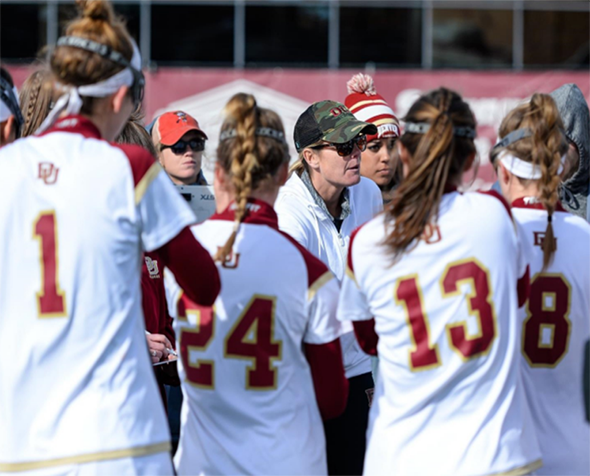