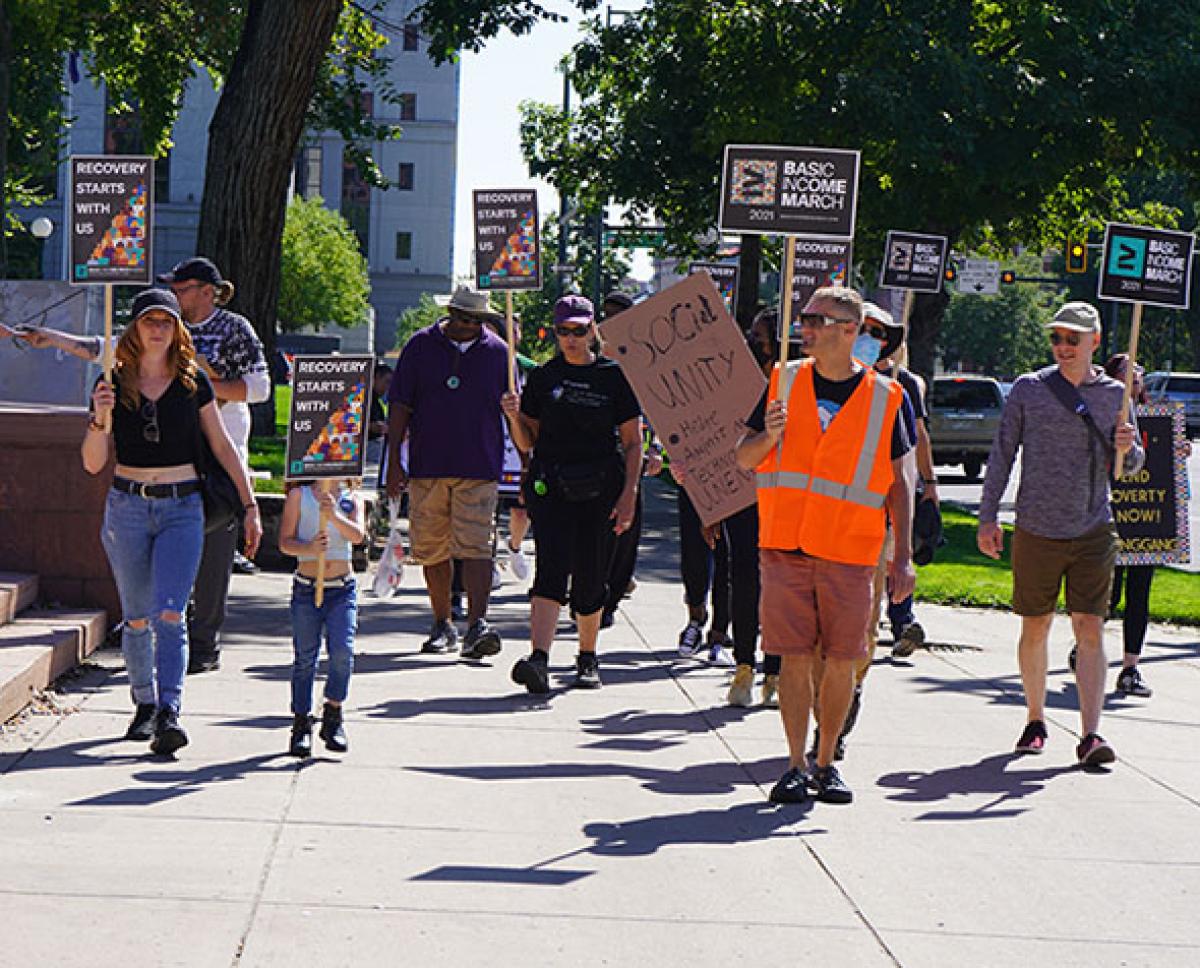 In a march toward the Colorado Capitol, a group of people pressed forward with a singular demand. Their signs carried the weight of their request – a federal basic income as a means to a healthier, more innovative and more just society.

“I was scared to be a young mom. That wasn’t my plan,” says Maria Sierra, Mile High Ministries education and employment coordinator.

At 19, Sierra became a single mother in need of public assistance. Shortly after, she enrolled in a transitional housing program.

“If rent has gone up, why hasn’t our assistance?” she asks. “To me, that’s disgusting. Our system hasn’t changed.”

Nearly 30 years later, Sierra is among the changemakers working with the Denver Basic Income Project on a basic income program for the unhoused, said to be the first of its kind in the United States.

With the help of Daniel Brisson of the University of Denver’s Center for Housing and Homelessness Research (CHHR), the program will conduct a randomized control trial to analyze the effects.

“We want to understand if and how guaranteed income works for people experiencing homelessness,” Brisson says. “People experiencing homelessness are in some of the most challenging situations in our country. (We want to determine) if some amount of cash, unrestricted cash, can provide an impetus – a point for change and thriving in people’s lives.”

Mark Donovan, founder of the Denver Basic Income Project, is a Denver-based entrepreneur and philanthropist. During the pandemic, he noted a juxtaposition. As millions lost money, wealth grew for those at the top, including him.

“I decided that I needed to more actively give back,” Donovan says. “To both acknowledge the privilege I experience as a white man and the economic and structural benefits I receive."

He began by giving $1,000 a month in cash to 10 individuals. Moved by the immediate impact, Donovan knew he needed to do more. So he spent $500,000 to launch the Denver Basic Income Project.

“The conditions we have created in our economy, in our society -- how we view people who are unhoused, how we treat them -- is completely unacceptable,” Donovan says. “There are many reasons people are unhoused. We tend to blame the individuals and not the structural reasons.”

What’s harder, he notes, is to acknowledge that the systems that benefit people of privilege are not fair. Instead, many attribute their success to hard work alone.

“People who are working three jobs to keep food on the table are working just as hard,” Donovan says. “It’s just much easier to blame and not take ownership of our own role, for those of us who have had advantages, privileges of wealth and privileges of being white in our society.

While Donovan and others spearhead the effort on the front line, CHHR’s research will serve as a tool to help guide the Denver Basic Income Project. This work, Brisson says, is a perfect alignment with the University’s dedication to the public good.

“The program and the research are going to have a measurable public impact,” Brisson says, “whether it works or not. This is a large-scale study.”

For Donovan, this is a collaborative effort, one he could not do alone. As advisory board member Andre Cunningham describes it, the program isn’t a model where one size fits all. They want to bring a shoe store of ideas to the unhoused community. The ideas generated, he says, must include people of color like himself.

“Oftentimes we are the ones impacted by these situations. To me, it’s very important to include the individuals from the communities primarily impacted. Diversity doesn’t mean just color, it means culture,” says Cunningham.

So far, the Denver Basic Income Project has raised $3.5 million of its $7.4 million goal. It expects to fully launch by the first quarter of 2022.

The project is modeled on similar programs, New Leaf Project in Canada and SEED Stockton, California.

"Emboldened by positive results from these other powerful studies, we believe that providing a basic income to our unhoused neighbors, and allowing them to make decisions on how to spend that money, has the potential to increase food and housing security, improve mental health, and create access to new opportunities in employment among other transformational life changes," Donovan says.