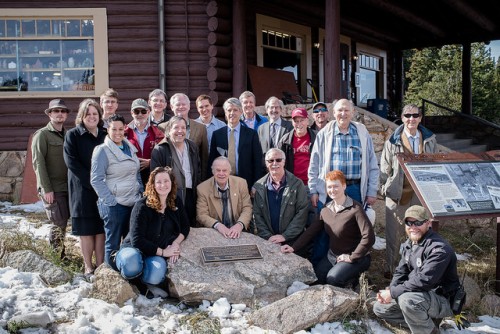 Several faculty members and students from the University of Denver’s Department of Physics and Astronomy in the Division of Natural Sciences and Mathematics were among those who took part in the American Physical Society’s (APS) Oct. 19 dedication of the laboratories at Echo Lake and Mount Evans as a Historic Physics Site.

A day before the dedication, the department hosted a colloquium that included discussions about cosmic ray and astronomic research, including work done at the labs at Echo Lake. The colloquium featured talks led by Iona, Stencel, Ormes, Robert Wilson, a professor at Colorado State University, and Lawrence W. Jones, professor emeritus of physics at the University of Michigan.

The Historic Physics Site dedication celebrated the field of physics, specifically the study of cosmic rays, which contain high-energy particles, most originating outside the solar system. It’s a sub-field of study in which DU physics faculty and researchers have become well-known for their contributions.

While APS offers the Historic Site Initiative, Iona says it was Jones who recommended the Echo Lake site for dedication. After initiating a discussion, Jones worked with Iona, Ormes and Stencel to develop a proposal that was then sent to the APS for consideration. APS is the world’s largest society of physicists with more than 54,000 members.

Physics professors and researchers from DU have been contributing to the study and understanding of cosmic rays for decades. DU was part of the Inter-University High Altitude Laboratory that conducted research on cosmic radiation at Echo Lake and on campus. DU also has hosted three international conferences on cosmic rays. These took place in 1949, 1970 and 2014.

“The work helped multiple graduate students earn degrees. The support that the University provided to national and international research groups was widely acknowledged,” Iona said. “The involvement of the DU community, though primarily the physics department, was critical to the success of the other research groups, as DU maintained and developed the research sites.”

Iona adds that the important research conducted at the sites helped provide evidence that:

The High Altitude Laboratory on top of Mount Evans and a collection of buildings at Echo Lake, Iona says, were home to important work that helped verify early conclusions about cosmic radiation. This included, as noted in the historic site application, that radiation is primarily made of protons, and that the shower of collision products includes electrons, neutrons, positrons, muons and some anti-matter particles. 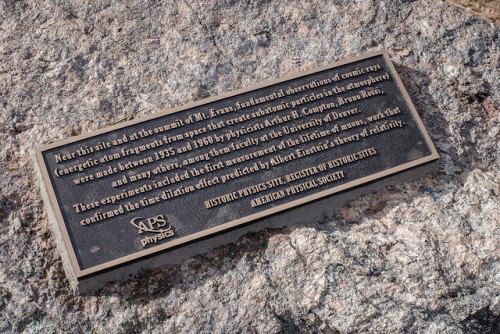 A group of institutions — among them the University of Chicago, Cornell University, University of Denver, Massachusetts Institute of Technology, New York University and Princeton University — had once operated the site together. Today, the site is solely operated by DU.

Several DU faculty members were mentioned during the dedication for their contributions to the operation and success of the High Altitude Laboratory: