This FAQ is a living document that is updated as new information becomes available. It was first posted on January 21, 2020.

The following graphic explains what the pay equity study is and is not. 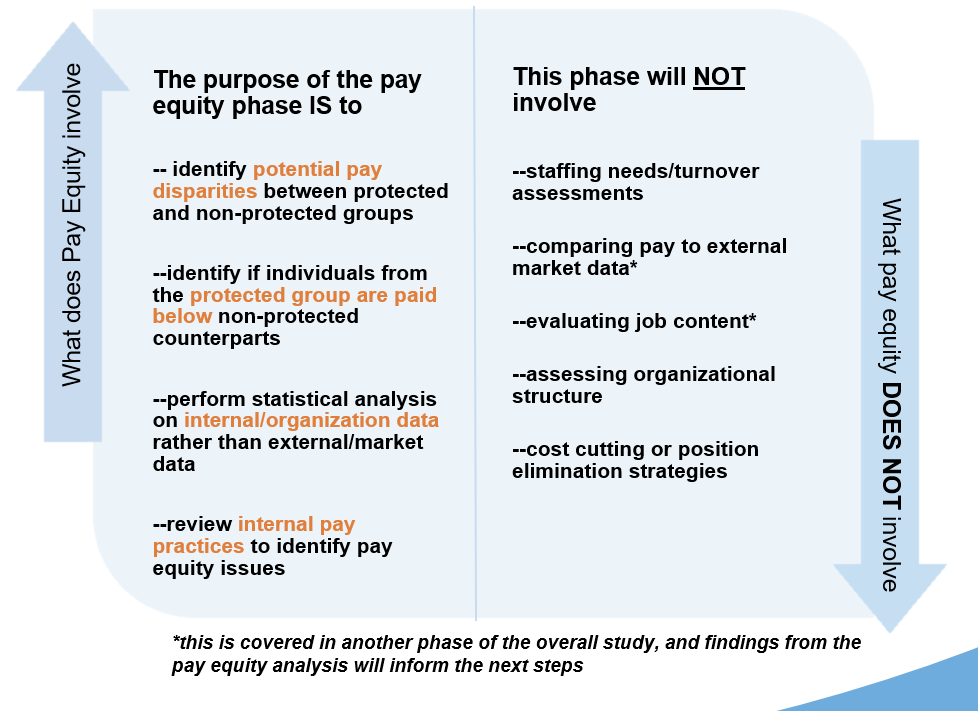 We offer the following definitions to facilitate an accurate understanding of the communications materials related to the University of Denver’s 2020 pay equity study.

An employer who proactively recruits, hires and promotes minorities, women, disabled individuals and veterans with the intent of increasing the representation of underrepresented groups.

This legislation prohibits Colorado employers from discriminating on the basis of sex by paying different wages to employees of different sexes for substantially similar work using a composite of skill, effort and responsibility.

Wages paid by an organization to employees in exchange for work, including bonuses.

Compensation and benefits comparable to other employers in the same industry and geographical area.

The Equal Pay for Equal Work Act prohibits employers from paying women less than men for doing the same or substantially the same work at the same facility.

Compares the pay of two specific employees, one male and one female, doing the same or substantially similar work.

Internal consistency of salary amongst employees within an organization.

An organization’s relative position in the marketplace when compared to other companies in the same industry.

Pay at a level that matches the market average salary for a specific job.

Paying employees fairly and consistently, without discrimination, but taking into account job-related factors such as performance, education, work experience, and tenure.

An analysis to determine whether there are systemic inequities affecting employees at an organization based on gender and underrepresented minority status.

“Promotional Opportunity” means when the University has or anticipates a vacancy in an existing or new position that could be considered a promotion for one or more employee(s) in terms of compensation, benefits, status, duties, or access to further advancement.

Under federal law, employers cannot discriminate against protected groups on the basis of race, color, national origin, religion, sex, age, or disability. However, not every group is a protected class under federal law. If a person is not a member of one of the designated groups, they may not be protected under federal or state anti-discrimination laws. Examples include people with criminal records, undocumented aliens, or individuals with varying education levels.

When the pay of employees in lower-level jobs are paid almost as much as their colleagues in higher-level jobs.

The middle point of a salary range’s minimum and maximum.