Exploring ‘Mars on Earth’ and Spending the Semester at Sea 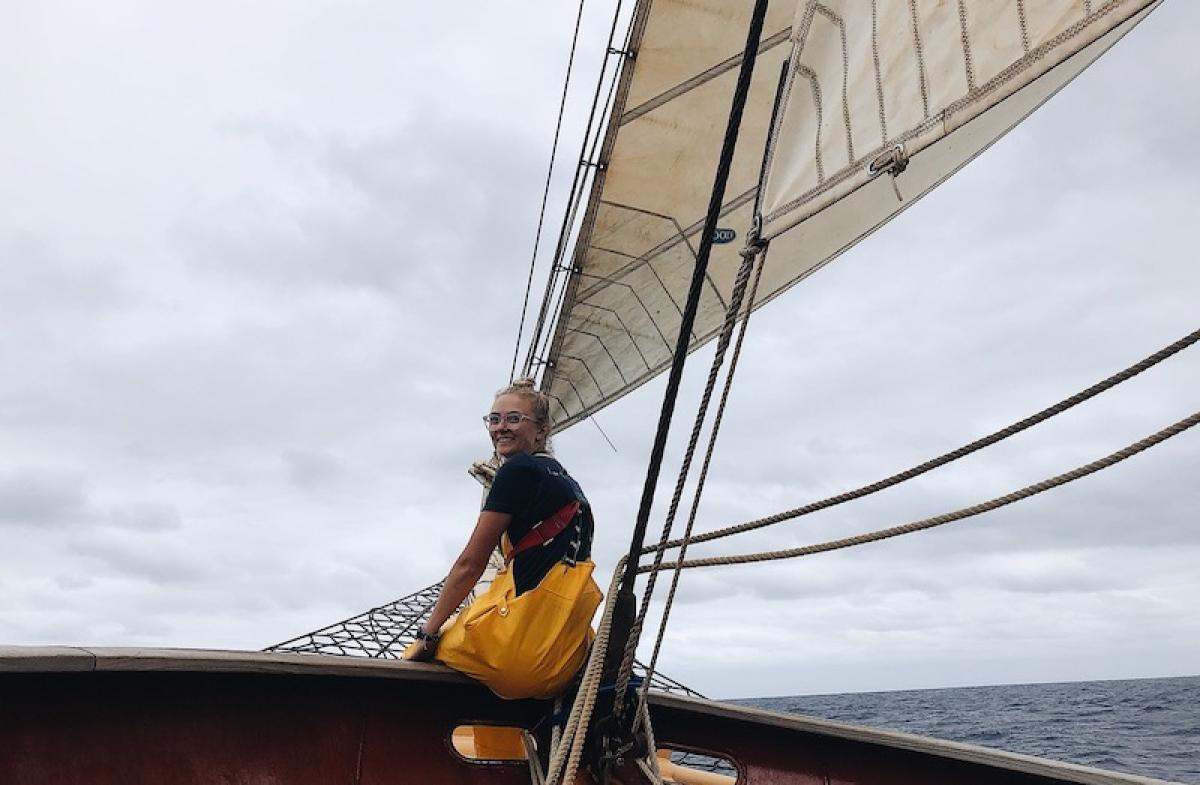 Olivia DeWitt remembers anxiously waiting in the University of Denver’s Magness Arena to find out where she would study abroad. After months of dreaming, interviewing and boosting her GPA, it all came down to a little luggage tag in her hand, her destination hidden inside.

“My best friends and I wanted to go home to open them together,” DeWitt recalls of that spring day in 2019. “We were sitting on my friend’s floor, and we counted to three. We all got our top choice.”

“It was truly one of the best days of my life,” DeWitt says. After all, her tag read SEA Semester, and that news heralded the beginning of a mind-changing journey thanks to DU's signature international education program for undergraduates. Cherrington Global Scholars allows eligible junior and senior students to study abroad at comparable cost of a term at DU. This past academic year, DU's program climbed to the third spot in the annual Open Doors report from the Institute of International Education.

SEA Semester (SEA stands for Sea Education Association) is recognized as a leader in ocean education; it focuses on sustainability in Polynesian Island culture and provides four weeks of prep courses before sending students on a six-week trip by ship through the Pacific Ocean. Over the course of her voyage, DeWitt would learn how to be a deckhand on a ship, would expand her knowledge about the islands and atolls of Polynesia and would even participate in a discovery on islands referred to as “Mars on Earth.” 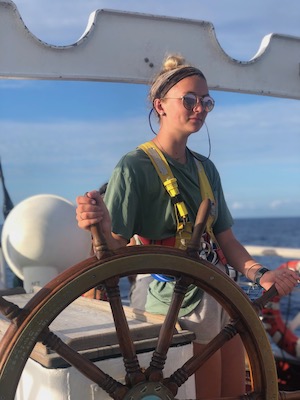 At the beginning of the fall 2019 quarter, DeWitt departed for the SEA Semester campus in Woods Hole, Massachusetts, where she was the only DU student in a group of 26. They spent the next four weeks preparing for their time on the SSV Robert C. Seamans, a tall ship research vessel, where they took classes in anthropology, oceanography and nautical science. Each class was tied to a research project that would be executed during the coming journey. DeWitt, who is majoring in ecology and minoring in astrophysics and gender & women's studies, focused her work on the shark population around Fiji, women and gender roles throughout their stops at sea, and how local communities treat their waste in the kingdom of Tonga.

“The research in Tonga ended up being one of the most meaningful learning experiences on the trip,” DeWitt says. “I found out that about 10 years ago, no one even knew about recycling. They would just dump or burn trash. Now, they recycle and have trucks that pick things up. It was a big reform, but they have a long way to go.”

When they weren’t conducting research and learning from island locals, students filled their time with data collection on the ship. The group was divided into different watch schedules that spanned the clock—on for six hours and off for 12. The watch time, DeWitt says, was just as valuable as the research.

“I learned just how small I am,” DeWitt says. “We would not see land for two weeks and have watches all hours of the day. I would watch the sunrise while you could still see the stars. No matter how far you looked, you couldn’t see land. It made me think how small my little bit [of life] makes up, but also how big it could make up. Even though I’m only one person, you can see how much it matters to be the best person I can be.”

DeWitt says one of the highlights of her trip was getting to work with NASA researchers on the islands of Hunga Tonga-Hunga Ha’apai. Recently formed by a volcano, they are Earth’s newest land masses, and scientists believe they offer insight to the geology of Mars.

“The whole thing was amazing,” DeWitt recalls. “It was like being in a “Star Wars” film on a different planet. I’ll never experience something like that for the rest of my life.”

Students spent their days taking drone pictures, soil samples and researching the surface of this new island. It even led them to a discovery that the island’s crater lake was warm, indicating it could be geothermal.

“Thanks to the SEA Semester student team, the joint SEA/NASA expedition to Hunga Tonga-Hunga Ha’apai has been beyond my wildest imagination in terms of discovery potential, data collection, teamwork, and enabling new datasets relevant to Earth sciences and future Mars surface exploration,” says James Garvin, chief scientist of the Sciences and Exploration Directorate at the NASA Goddard Space Flight Center. 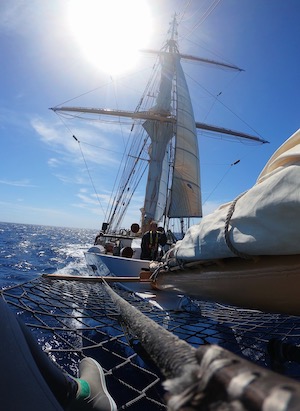 DeWitt knows her SEA Semester has shaped her educational experience, and she plans to carry that forward even after graduation.

“I learned more about being a respectful researcher and respectful scientist,” DeWitt says. “I really want to use my opportunities that I might have ahead of me and the prospect of becoming a woman in STEM professionally as a platform to advance women in the sciences.”

DeWitt says she wouldn’t hesitate to tell DU students to make the most of the opportunity for study abroad.

“It was the best experience ever,” she says. “DU really supports students going abroad here, which is amazing. Not many schools do that. The school is saying, ‘Here’s this opportunity; please take it.’ It’s life-changing and eye-opening.”