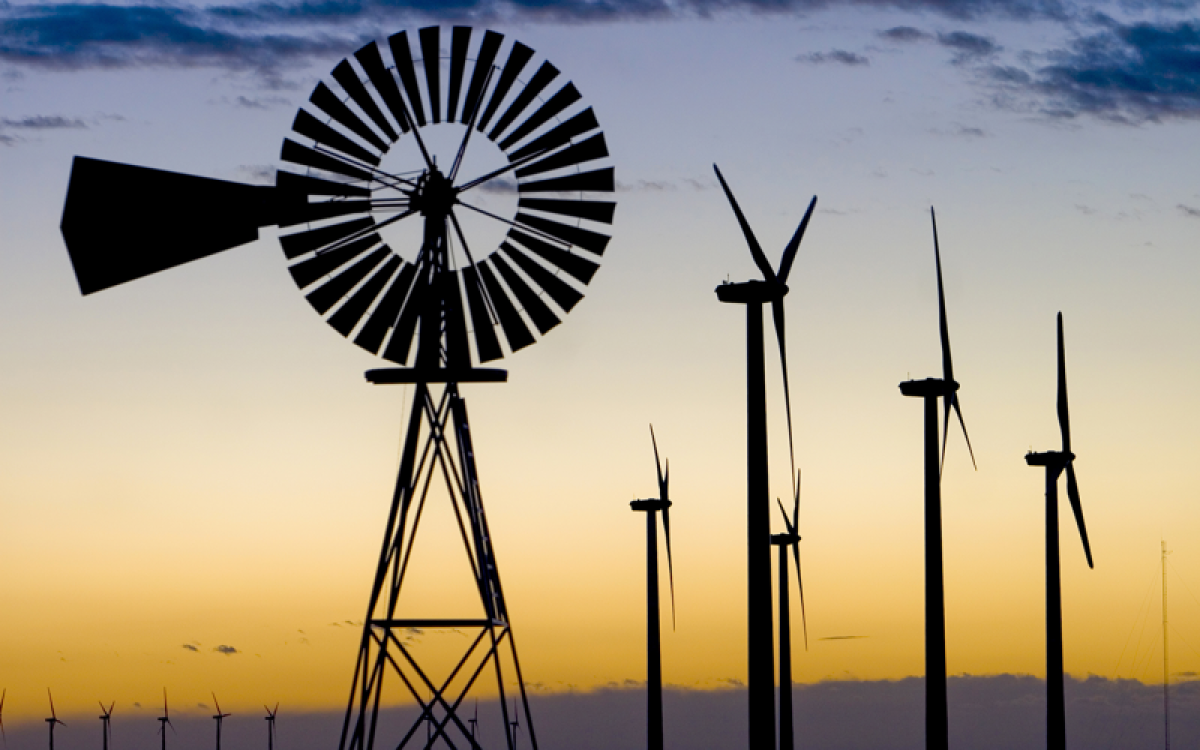 As onshore and offshore wind energy farms have proliferated in recent years, new research highlights a previously underexplored consequence: a wake effect from upwind wind farms that can significantly reduce the energy production — and related financial returns — of their downwind neighbors. The research appears today in the journal Nature Energy.

Over a century ago, oil and gas law recognized the “rule of capture,” which allows a landowner to capture a neighbor’s oil resources by sucking them from an adjacent well. This resulted in poor well-field recoveries and waste, so states intervened to regulate production through well-spacing, pooling, and other coordination measures. Similarly, states have developed water law regimes that protect rights for prior users. But current U.S. property law contains no such provisions for wind energy.

“It took oil and gas and water law decades to create these legal regimes,” said K.K. DuVivier, a co-author of the study and professor at the University of Denver's Sturm College of Law. “It appears that wind energy has not yet reached a similar stage of maturity. I hope this research will help raise awareness about the extent of the waking problem and educate those seeking a legal remedy.”

The study, led by the University of Colorado Boulder in collaboration with the University of Denver (DU) and the National Renewable Energy Laboratory (NREL), combines legal and economic analysis with atmospheric modeling to demonstrate that wake effects — which occur when groups of turbines reduce wind speed for up to several miles behind them — are measurable and predictable, yet remain largely unaccounted for in current U.S. property law.

“The findings highlight the need for coordinated development and awareness of the big picture in order to maximize wind energy generation nationwide,” said Julie Lundquist, lead author of the study and an associate professor in CU Boulder’s Department of Atmospheric and Oceanic Sciences (ATOC).

Wind energy developers seek out sites with reliable wind resources as well as convenient access to electrical transmission lines, leading to dense turbine deployment in choice areas with little coordination between competitors. Nearly 90 percent of U.S. wind farms are located within 25 miles of another wind farm — and often much closer.

Yet much like a homeowner whose once-unimpeded views are blocked by new construction, the study shows that existing wind farms stand to lose valuable energy production if they suddenly find themselves downwind of a new neighbor and its wind- and energy-reducing wake.

Using publicly-available data on monthly energy generation and dominant wind direction, the researchers modeled the wake effect on a pair of West Texas wind farms, using a third as a control. They found that wind speed reductions due to the establishment of the upwind farm reduced generation at the now-downwind farm by 5 percent from 2011-2015, an estimated revenue loss of around $3.7 million.

“Just as upstream water users can knowingly or unknowingly impose additional costs downstream, the same effect is in play here,” said Daniel Kaffine, a co-author of the study and a professor in CU Boulder’s Department of Economics. “We had a general sense of this interaction before and wanted to explore it further using a mix of social science and atmospheric data.”

Kaffine and Lundquist, both fellows in the Renewable and Sustainable Energy Institute (RASEI), noted that Texas made for a good case study because of its current and future stake in wind energy development, as well as historical parallels concerning usage rights for the state’s oil and gas resources.

Turbine wakes have been observed to extend up to 25 miles, potentially spanning multiple state and county jurisdictions and complicating matters even further.

“In the immediate future, some business incentives might change,” Kaffine said. “Energy firms might put more emphasis on securing leases upwind to ensure they have enough of a buffer.”

But while legal guidance may lag behind, Lundquist emphasized that the team’s sophisticated atmospheric science simulations show the wake effect is a highly predictable atmospheric phenomenon that can be modeled and planned for in light of the new data.

“It’s encouraging that the wake effects seen in the economic analysis are captured by the atmospheric simulations,” said Jessica Tomaszewski, a graduate student in ATOC who co-authored the new study.

“The strongest wakes occur at night, when the atmosphere is stable and wind speeds and directions meet specific criteria,” said Lundquist. “Out of the month of wakes simulated, only 28 hours, less than 4 percent of the time, had wakes in excess of 20 percent of the downwind farm’s capacity, suggesting this episodic issue can be predicted and managed.”

“Owners and grid managers can use this information to get ahead of the issue. New research at NREL in manipulating wakes might be helpful. Ultimately, however, better coordination will be necessary to maximize the public benefits of wind energy.”

Taking the wake effect into account will be especially crucial for the large number of offshore wind farms currently in development off the U.S. east coast, Lundquist added.

“Offshore wind farms are important, but they are expensive to build and mistakes will be equally expensive,” she said.

The researchers hope to expand their efforts to measure wind farm wake effects by incorporating aircraft measurements as well as capturing data on a more frequent timescale from other sites around the country.

The National Science Foundation (NSF) provided funding for the research via its Coupled Natural and Human Systems (CNH) program and a Graduate Research Fellowship. NREL and the U. S. Department of Energy’s Wind Energy Technologies Office provided additional funding.