Deep in the grumbling belly of a gold mine, one professor, an orientation leader, 18 students, two staff members and an old miner huddled shoulder to shoulder straining to catch a glint of sparkling gold by flashlight. This is the University of Denver’s idea of bonding.

Earlier in the day, professor Hillary Hamann asked the students in her first-year seminar (FSEM), Colorado’s Rivers, to put on metaphorical hats and get inquisitive as they stood on a bridge overlooking Clear Creek. Later that afternoon, gathering at the mouth of Idaho Springs’ Phoenix Gold Mine, they strapped on real hard hats and did just that.

That’s the goal of DU’s FSEM program — to get the gears turning. Students are tasked with choosing an FSEM outside of their comfort zone and get the chance to think, learn and bond their way toward a smooth transition to university life.

The FSEM groups first come together during Discoveries Week, where they meet their classmates and professor, who serves as their mentor throughout their first year at DU. “We are doing rigorous academics to try to help them there, but I also serve as a kind of mentor,” Hamann says. “We develop a really strong relationship, and I think that’s great for just helping ease that transition to college.”

Discoveries Week culminates in a field trip, where each FSEM takes the opportunity to get out into the real world. While one class headed to the zoo to better understand human nature, and another explored the Bible and social justice through indoor skydiving, Hamann’s class ventured out to view Colorado’s rivers firsthand. 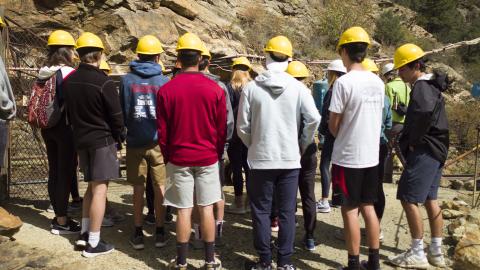 The day started with a stop at Mayhem Gulch, where Hamann and her students got an up close view of one of Colorado’s most important waterways, Clear Creek. The group discussed the various roles Clear Creek plays in society, from providing locals with water and a place for recreation, to sustaining flora and fauna and diluting waste. “For most of our students coming from out of state, Colorado is a real difference. It’s arid. It’s mountainous,” Hamann says. “I like to give them some options for where they might want to come and recreate, but also have them thinking just a little more broadly about how they have an impact on the environment around them.”

The highlight of the trip was a deep dive into the Phoenix Gold Mine accompanied by a certified miner — and a self-described crazy person — named Dave. He regaled his audience with tales of how a lucky lightning strike revealed the mine’s mother lode, a vein containing six rare minerals, including gold, copper and iron.

As students collected stories about tommy knockers, touched the real gold still wedged deep in the mine’s walls and stared down holes hundreds of feet deep, they also learned an important lesson about mining’s history and its impact on the state’s rivers. Hamann pointed out that Clear Creek sits on the Environmental Protection Agency’s 303(d) List thanks to minerals that remain in the river as remnants of the state’s mining heyday.

This underscored an important element of Hamann’s course. “We have to take these rivers and balance a lot of different things,” she says. “The water eventually flows out to the plains where it helps to grow our food, so I think that understanding watersheds is a really great way of pulling together a lot ideas of sustainability.”

Her students agree. “I thought it was really interesting,” Maya Mozolewski from Chicago says. “It was super informative, but entertaining, and it kind of got you into the perspective of the conditions of the mines. I mean, I think this is absolutely great, because nothing else I’m taking is anything like this.”