Their style is distinctive and their sound is unmatched, and for one hour last week, “Black Violin” put on an unforgettable show for kids from around the Denver metro area. Nearly 1,000 students from Denver and Aurora public schools were treated to a special performance as part of the Newman Center’s student matinee series.

“For a lot of these kids, it’s the first time they have ever attended a live performance and also their first time setting foot on a college campus,” Kendra Whitlock Ingram, executive director of the Newman Center for the Performing Arts, says, noting that the effort grows out of DU’s community-focused strategic plan. 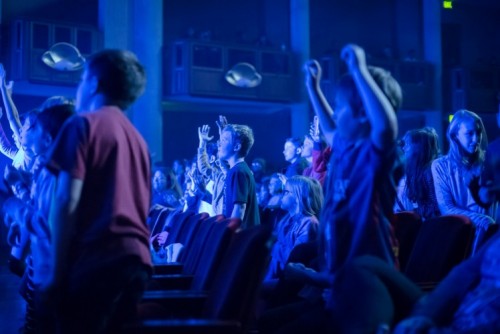 “The student matinee program is a direct result of our contribution to DU IMPACT 2025 — making the Newman Center an open door to the community and getting young students on campus for the very first time and exposing them to the arts,” she adds.

Black Violin features Kev Marcus on the violin, Wil B on the viola, a DJ and a drummer. The group’s unique ability to combine classical and hip-hop music has captured the attention of audiences all over the world. They also have performed the opening soundtracks for ESPN’s coverage of the U.S. Open and Heisman Trophy presentation.

As part of the Newman Center Presents performing arts series, Black Violin was in concert for two nights at DU. The student matinee provided an opportunity for the group to send a message to a diverse group of students ranging from kindergartners to high school seniors.

“It’s important for them to understand that it’s not really about the violin; it’s about taking something that you love and something that you have a passion for and taking it to another level. That’s ultimately what the show is about,” Wil B says. 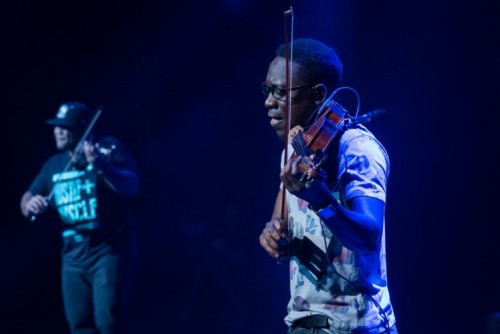 For the students, the message was received. Anna Cordova is a violinist and a sophomore at Aurora’s Gateway High School. Black Violin’s performance opened her eyes to new opportunities.

“I’ve seen stuff like this, but not on the violin or string instruments,” she says. “It shows me there’s these opportunities that are out there for me, and it shows pathways that I can take in a career.”

Carmen Wiest is Cordova’s music teacher at Gateway. She was excited to bring her students to see Black Violin because of Kev Marcus and Will B’s inspirational story of coming from public schools and becoming artists. Both were introduced to their instruments against their choice and as a way to stay away from trouble. Wiest says that coming to the University of Denver campus sparked an important conversation among those in her class.

“We took the light rail here, and as we were walking through campus, the conversations started centering around going to school and going to college and how great it would be to go to school here and what we wanted to study,” Wiest says. “This took us out of our daily environment, and all of the students that came on the trip with me were talking about bigger things and next steps in life.”