The significance of homecoming has perhaps never carried more meaning than it did this year. Amid a global pandemic, in which many couldn’t visit campus for over 18 months, the University of Denver reopened to the community last week for Homecoming 2021.

“Our alums and the community are very excited to be back and engaged,” says Brandon Buzbee, senior associate vice chancellor of campaign and global networks in University Advancement. “They are also proud of what DU was able to do during the pandemic by serving our students and emerging as a stronger institution.”

It would be difficult to rival the magnitude of events that made up this year’s Homecoming week. With the grand opening of new buildings, the return of campus traditions, crowds making their way back to Magness Arena and the inauguration of a new chancellor, the week offered numerous ways to reengage with the University in person or virtually.

In what was a long-awaited ceremony delayed by the pandemic, Chancellor Jeremy Haefner was officially inaugurated as the university’s 19th chancellor Friday. Hundreds of members of the Denver community attended the installation ceremony at the Newman Center for the Performing Arts or watched virtually.

During his address, Haefner made three significant announcements affecting the future of the University of Denver. First, the University has acquired a 724-acre site in Larimer County that will become the James C. Kennedy Mountain Campus. Second, demonstrating DU’s commitment to sustainability, the chancellor set a bold goal of carbon neutrality by 2030, 20 years earlier than previously promised. Then, as further commitment to free expression and speech, Haefner announced a $1 million institution-wide initiative for civil discourse.

“The opening of new buildings on campus always signifies a new beginning,” Buzbee says. “It represents a new beginning in the engagement of our alumni and community in the role that we hope that they play in the life of the campus.”

After a year hiatus because of the pandemic, the Crimson Classic made its return to DU. Streets and sidewalks on the south side of campus filled with hundreds of students, faculty, staff and alumni for the 5K run/walk.

Another tradition back this year was the Hocktoberfest celebration. On Saturday afternoon, the Campus Green was transformed into a large party with DU fans who wanted to enjoy some great food, drinks, music and games. 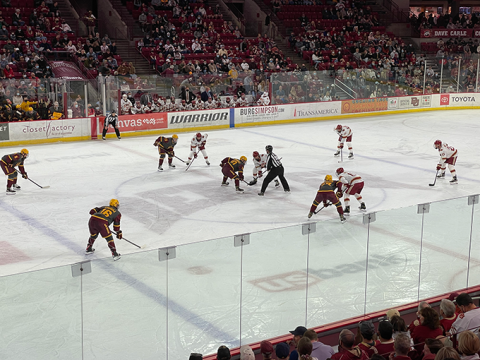 The Hocktoberfest celebration was followed by DU hockey hosting Arizona State University in their second matchup of the weekend. Friday, the Pioneers skated to an easy 8-3 victory in the season opener. Then on Saturday, DU completed the sweep of the Sun Devils with a 4-3 win. It was the first time since March 2020 that Magness Arena was back to full capacity with fans in the stands.

“One of the great experiences and reasons you come to Denver to play hockey is being able to play in front of a great home crowd. It means a lot to have our fans back in Magness Arena,” says Karlton Creech, vice chancellor for Athletics, Recreation and Ritchie Center Operations. “Another thing we took a break from last year is really hosting the Denver community at our events. To have thousands of people coming back, not only to enjoy the hockey games but all the homecoming activities, is really a great thing, and we couldn’t be more excited.”