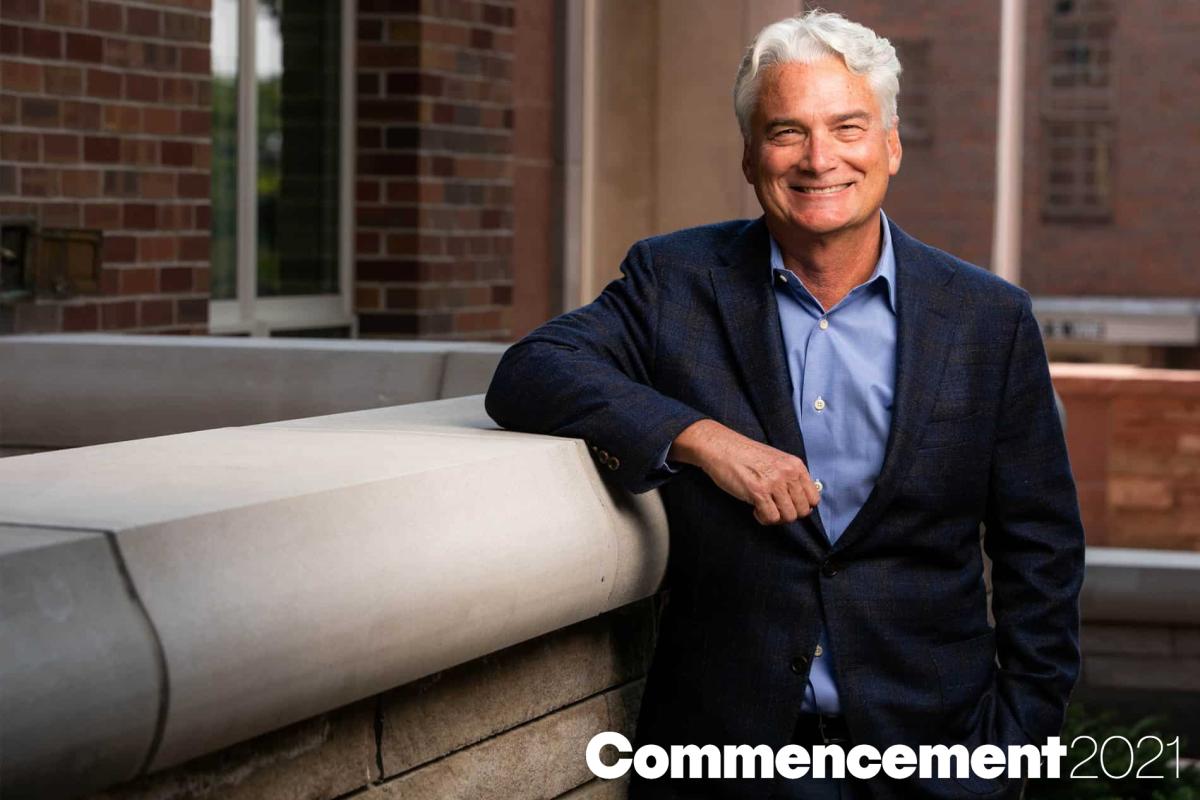 In September 2017, the only thing Mark Sharkey was planning was his retirement.

For 35 years, Sharkey (MBA ’93) had been chasing a childhood dream, forged in the Waterford crystal and Wedgewood china he encountered at a Jamaican resort. There, at the Plantation Inn, the 11-year-old swore to his parents he would run a company in the hospitality industry.

Not long ago, the then 58year-old outgoing president of Remington Hotels. But as he mulled his future, an email hit his inbox. The University of Denver's Daniels College of Business was announcing a new Executive PhD program.

Sharkey picked up the phone right away and called. This was his opportunity, he realized, to chase down something he had desired his entire adult life.

“I wanted to teach at the college level,” Sharkey says. “After 40 years, I wanted to give back to the industry, and I thought teaching would be a good way to do it.”

When he walks across the Commencement stage at Magness Arena in June, collecting his second DU degree, Sharkey, part of the inaugural cohort of executive PhDs, will be one step closer to achieving his goal.

The Daniels program is the first and only one of its kind in the western United States, developed to blend quality cross-disciplinary research and modern-day organizational challenges, explains Lisa Victoravich, associate dean and program director. Four students will graduate with Sharkey this spring and others will finish their dissertations in the summer or the next academic year.

“There are only a handful of PhDs in business that allow students to take this path to earn this advanced degree at a world-class business school,” she says. “As the founder of the program, I am immensely proud of our graduates who had the trust in me and Daniels to sign up for our first cohort. I am confident that they will use their new skill set to impact business and the public good as they continue to pursue their personal journeys post-graduation.”

When Sharkey enrolled, he figured he was simply signing up for another three years of academic work, much as he had done as an undergraduate or as a student in the Daniels MBA program. Instead, he found an experience he calls the most challenging of his life.

“Everything about it was so unique compared to everything I’ve ever done, which made it scary as [crap],” he says.

Not only did his classes force him to think differently, but Sharkey had to make up ground technologically too. As the president of a billion-dollar company, Sharkey had never created reports; he just read them. Word processing and spreadsheets were totally unfamiliar. The last time he worked a computer, he estimates, was in graduate school, 25 years earlier. He typed his first exam on his iPhone, which was faster for him than using a computer keyboard.

YouTube proved to be his savior — the source of innumerable tutorials that allowed him to complete his coursework. Each semester, Sharkey says, he gave himself permission to quit the program. But after completing his first year, there was no looking back.

Sharkey’s dissertation focuses on the concept of “multi-unit leaders” — whether the skill sets needed to run one hotel translate to a successful career as a regional manager, for example.

Completing his project didn’t always feel attainable, Sharkey admits. But he credits the program’s blended format for helping him stay on track to graduate this spring. He likens the innovative structure to the weekend MBA program he completed at Daniels in 1993. It allowed him to work toward his dreams while keeping his work schedule.

Still, that didn’t mean the road was easy.

“I could retire and be playing golf every day,” he remembers thinking. “Why am I starting a PhD program that probably ends up being the hardest thing I’ve done in my entire life? And why am I doing it at 60 years old?”

The answer, he says, is a testament to the faculty he has encountered as a student — and the friends and family he hopes to inspire.

“The quality of people I’ve come across teaching at DU makes me want to be one of those people,” he says. “If something is hard, it’s probably because it’s worthwhile. The harder it is probably the better it’s going to be.”