Hundreds of Volunteers Participate in First Earth Day of DU-ing 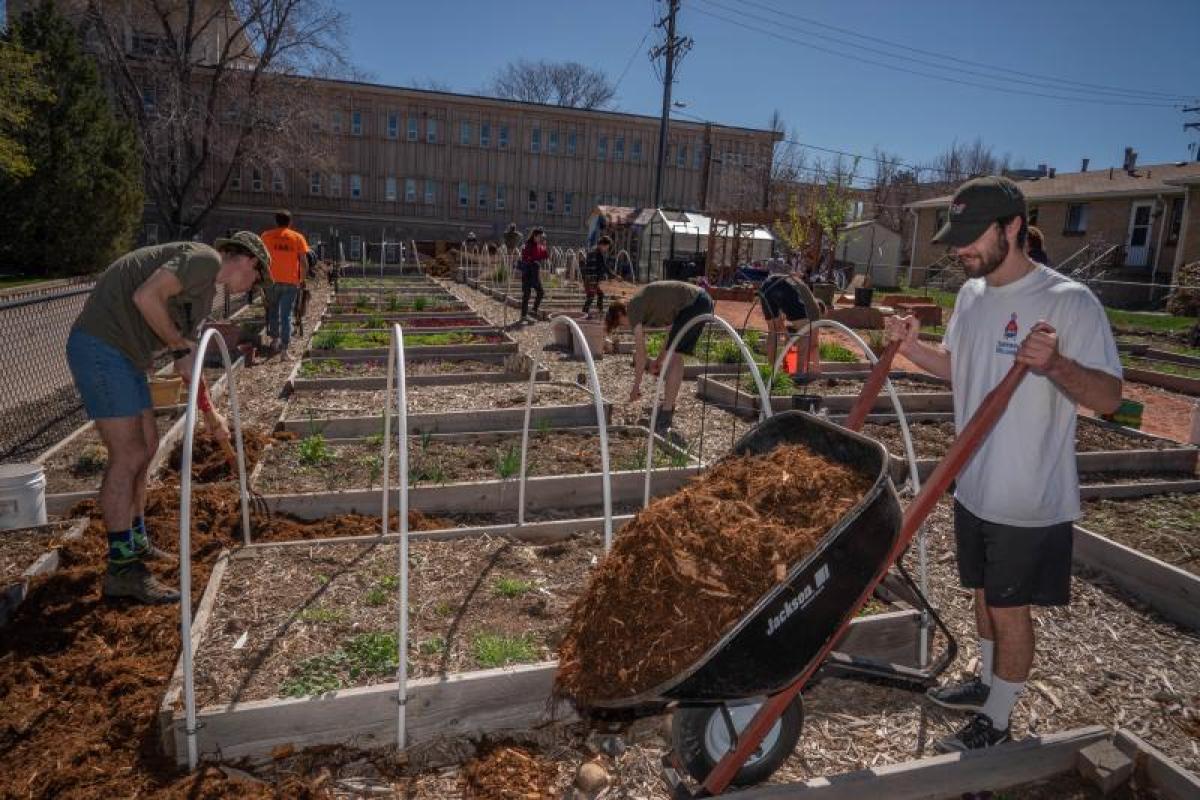 “Earth Day began in 1970 with millions of people across the U.S — Republicans and Democrats, rich and poor, urban and rural folks — all coming together to protest and take action for clean air, clean water and the protection of species.”

It’s in that spirit, says Chad King, the University of Denver’s director of sustainability, that 230 volunteers came together on Friday, April 19 for DU’s first Earth Day of DU-ing.

The day kicked off with breakfast burritos and coffee on Carnegie Green. Among the volunteers were DU faculty, staff, students and community members, who contributed a total of 700 volunteer hours and completed 16 different projects with 13 campus and community partners, including alumni-run organizations Re:Vision and GRID Alternatives.

The event drew graduate and undergraduate students alike, including Chelsea Anderson, who is working toward her master’s degree in environmental policy and management. “The Earth is our home and we should take care of it,” she says. “It’s just a level of respect that I feel a lot of people have lost. Events like this just make it widely known that people still care.”

The day’s dirtiest job may have been “Mini Mount Trashmore,” where volunteers sorted every bag of garbage collected at the Daniels College of Business over a 24-hour period. The group weighed the trash before sorting it into compost, recycle and landfill bags. After reweighing the sorted trash, they calculated the building’s diversion rate and offered guidance for improvement, especially in light of recent changes to recycling rules in Denver. 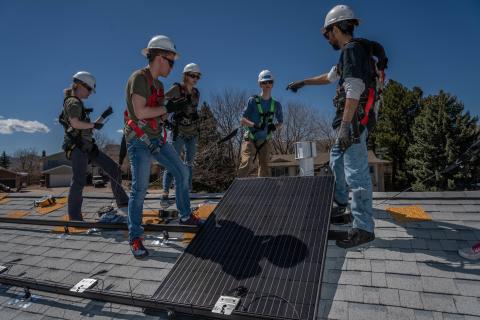 Courtney Wells, graduate waste fellow in DU’s Center for Sustainability, helped lead the Mount Trashmore effort. “People don’t realize the hard work that goes into it,” she says. “We do this at a small scale, but it’s also done at [Alpine Waste & Recycling], where the trash goes. It just shows how important it is to actually separate everything. The more awareness, the better it is.”

The project supported the center’s goal of pushing Earth Day stewardship to new heights, says Emily Schosid, DU’s sustainability program coordinator and the organizer behind this year’s Earth Day of DU-ing. “We see Earth Day as the perfect day to go out and make an impact on the community, and I think it’s an easy thing for the general public to rally behind,” she says. “We wanted to try to expand the definition of what would count as an Earth Day project. So we are doing some community cleanups; we are planting a bunch of gardens; we are installing some solar panels. We have all of these other really cool projects, which I think expands beyond just the tree planting.”

And, Schosid says, the event was designed to bring the DU community together in a new, holistic way. “There’s not a whole lot of programs that truly bring together the entire DU community. We have faculty, staff, undergraduate students, alumni, friends all participating. Plus we have several organizations that are run by alumni participating,” Schosid notes. “There are not a lot of events at DU that really embody the OneDU concept, so I’m really excited about that.” 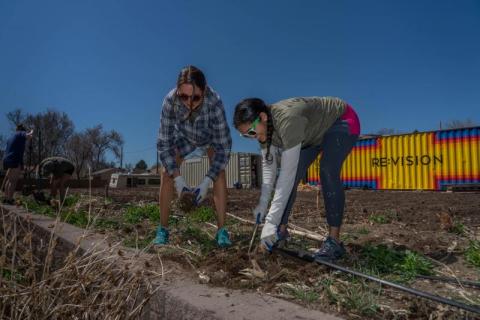 King and Schosid hope to see Earth Day of DU-ing grow into a citywide effort. “This is something we’ve talked about starting for a while,” King says. “We hope to keep growing this event, as we think it’s something the whole city will embrace. We want to get people out, working and positively impacting our community and our ecosystem. I expect this to grow next year.”

It’s not only a celebration of the Earth, but of the work people do on its behalf every day, says graduate student Hogan Udomah, who studies environmental reporting and analytics and works as energy graduate lead at the Center for Sustainability. “This is a celebration of what we do in sustainability. It’s celebrating the fact that there are people who are putting in effort to make it right."

As part of DU IMPACT 2025 and the University’s goal to reduce our overall carbon footprint by 45%, we are excited to share the news that we have signed a contract with Pivot Energy to install a 2MW solar photovoltaic array with over 7,000 solar panels across 18 DU buildings, including the new Dimond Family Residential Village and Pioneer Career Achievement Center. Installation of the system will begin late spring and will be operational by end of 2019.