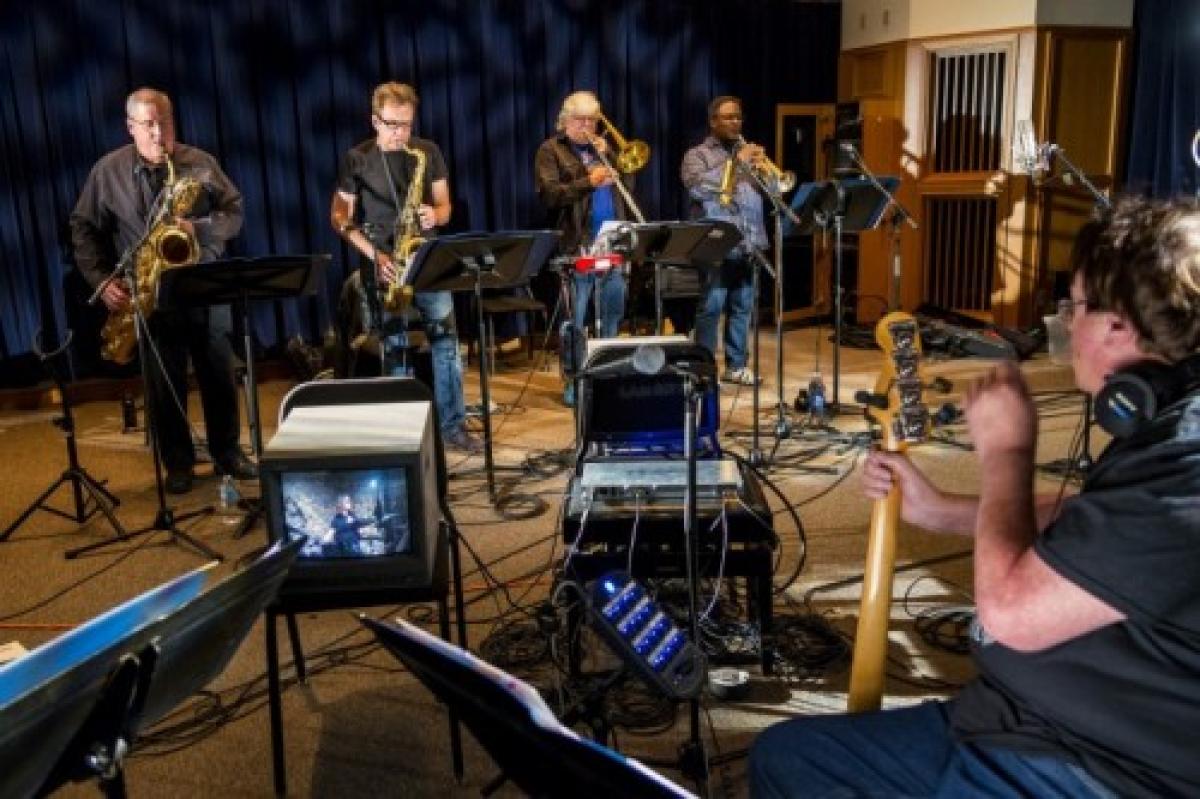 During the break before the winter quarter begins, the concert halls and rehearsal areas of the University of Denver’s Newman Center of the Performing Arts are usually quiet — with the possible exception of a visiting “Nutcracker” production.

But this year, activity was at a fever pitch in the recording studio and jazz rehearsal area as a new rock-funk-pop group, composed of Lamont School of Music faculty and some of the top musicians in the world, recorded their first album. Recording for the first time as Vinyl Hampdin, the artists travelled to Denver from around the U.S. and Canada.

Lamont faculty members Steve Wiest on trombone, Art Bouton on saxophone and Eric Gunnison on piano were joined by Frank Greene on trumpet, Lisa Watts on vocals, Ryan Davidson on guitar, Stockton Helbing on drums, Gerald Stockton on bass and Ray Herrmann on saxophone. They have a number of Grammy nominations and legendary groups on their resumes: Greene has performed with Maynard Ferguson and the “Late Show with David Letterman” Orchestra; Herrmann has played with Chicago, Santana, Herbie Hancock, Whitney Houston and Bob Dylan; and multiple Grammy-nominated composer and trombonist Wiest also played with Maynard Ferguson and Doc Severinsen.

“What a joy it was to bring together such an all-star cast of magnificent artists in Denver for this project,” Weist, the session’s composer and arranger, said. “Vinyl Hampdin is a modern rock-pop-funk band that runs the gamut of musical styles, from solid epic street beat rocked-out all the way to soulful ballads. I like to think of it as ‘What would Chicago, BS&T and Tower of Power sound like if they started out now?’ We recorded three originals and three highly arranged covers, including Stevie Wonder’s classic ‘Superstition’ and Paul McCartney’s beautiful ‘My Love.’ This is highly listenable deep pocket fare with plenty of sticky hooks!”

In the booth were drummer Stockton Helbing, who also produced the tracks, and recording engineers Phil Bulla, co-producer and a seven-time Grammy nominee, and Michael Schulze. A full professional video crew and photographer documented the recording session and provided the video element of the album.

Hermann, the current Chicago touring saxophonist, summed up the feelings of the band this way: “Thank you Steve Wiest! It was so cool to be playing and recording with these wonderful Vinyl Hampdin musicians on the beautiful campus of the University of Denver. Everything felt right and sounded right just the way it is supposed to be. You make me want to dance! Look out world, here comes Vinyl Hampdin!”

Canadian guitarist Davidson added, “Performing on the Vinyl Hampdin recording was a dream come true. World-class musicians from all over the continent were assembled at the beautiful University of Denver to play the epic and brilliant arrangements of Steve Wiest.

I am truly honoured to have been a part of this recording.”

The results of the recording session will be released as a series of YouTube videos produced by Snarky Puppy videographer Andy LaViolette. The music also will be featured on an album on Stockton Helbing’s label “Armored Records.”