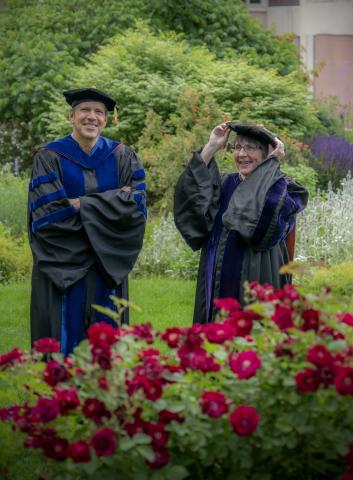 For most people, college graduation is a fleeting experience. Years of work build into one day, and all at once, it’s over. But, work your way into the position of chief marshal, and the excitement can be yours three times every year.

That’s the case for Nancy Sampson and Michael Keables, who have served as the team behind the Commencement curtain for over a decade. Sampson, professor emerita in the Daniels College of Business, is a true veteran in the role. Her tenure as chief marshal began nearly 40 years ago when the administration came to her and said, “It’s time a woman did this.”

Keables, associate professor and chair of the Department of Geography and the Environment, first put his hat in the ring as a faculty marshal back in the 1990s, but when former chief marshal Gordon Van Stroh stepped down more than a decade ago, Sampson and Keables took over the job and have been running the show behind the scenes ever since.

Together, they’ve battled streakers, swim goggles, dogs and vodka-infused lemons to protect this sacred moment for thousands of students. “Cat herders is what we like to think of ourselves as,” says Keables. “Butterfly wranglers.” Years of experience and a keen sense of what to expect have helped Keables and Sampson masterfully usher over a thousand fluttering and excited students into their futures — in just 10 minutes. The pair organize students into six lines that flood Magness Arena from various directions each spring, ensuring a speedy and organized ceremony. All told, the production requires the help of at least 25 faculty marshals and months of preparation, meetings and coordination.

It’s a big job, and quite simply, it takes two. “I can’t do it without Nancy,” Keables says. “We’ve been doing this long enough that we make a pretty good team. We each cover certain aspects of it, and we both know that if something goes wrong, the only people who are going to know what’s going on will be the two of us, and we will take care of it.”

Over the years, the pair have seen Commencement evolve in marked ways. Sampson says her earliest ceremonies stir memories of the Vietnam War and low attendance. Later, she remembers a June snowstorm causing mass confusion. “Starting at five in the morning, we moved everything inside the old arena,” she says. “Honestly, I didn’t know where anybody was going to be, especially the faculty. I had to tell their marshals to walk them out in the snow and keep them there until I could figure out where they could sit. They thought I dismissed them, and they all left.”

Over the years, Keables and Sampson have seen it all: students with the proverbial mortar-board-tans; one speaker ending his address with an all-too-convincing fake heart attack; students clamoring for a selfie with guest Jane Fonda; and a surprise visit from Copernicus, as portrayed by former history professor Allen Breck. But nothing compares to that moment the procession begins. “When the wind ensemble hits the fanfare to start the processional and we give the high sign and everybody starts at that one point, that’s one of the highlights for me,” Keables says. “You flip the switch and whatever is going to be will be. But, more than that, at that point the students kind of realize this is really happening. This is my day. This is my time. You can feel the energy.”

Moments like these make each festivity as special and important as the last. “We work very hard to give everyone their five seconds in the sun,” says Sampson. Adds Keables: “This is the biggest event at the University. That’s why Nancy and I spend so much time and put our hearts and souls into this. Across all levels from undergraduates to doctoral students, Commencement is the pinnacle.”

With spring Commencement just days away, Keables and Sampson have a few sage words of advice, steeped in years of careful observation: “It’s your last hurrah with your friends, your colleagues and your professors, so come with the right attitude.”