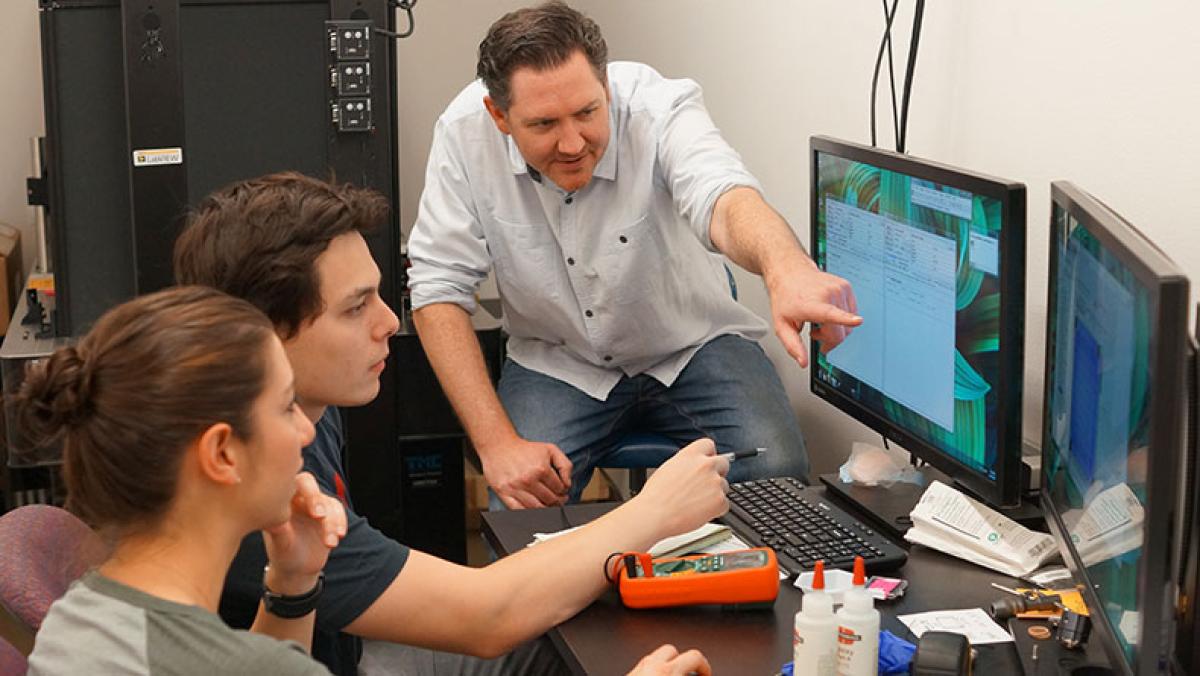 “Seeing is believing.” Coming from a scientist that might sound tired or cliché. But for Schuyler van Engelenburg, that idea is the North Star. What he learns about HIV through his hand-built microscope’s viewfinder is the “ultimate proof,” confirming some things scientists thought they knew about the virus, and uncovering new potential avenues for treating it.

“Take maybe the finest human hair — the tip of an eyelash. That’s maybe 80 microns. This is 800 times smaller than that. But we can see it. We can image this stuff. And that’s the amazing thing.”

That’s the scale on which van Engelenburg, an assistant professor in the Department of Biological Sciences, must work as he peers deep into the inner mechanisms of the human immunodeficiency virus (HIV). Bolstered by a $1.76 million grant from the National Institutes of Health (NIH), van Engelenburg’s research is focused on imaging HIV to create an exhaustive roadmap of the virus’ functions. His work could well aid in drug and vaccine development.

If a single HIV particle is the setting for van Engelenburg’s research story, the two main characters are the molecules “Gag” and “Envelope.” Understanding and disrupting the clandestine meeting of these two molecules, says van Engelenburg, may be a crucial tool in stopping the virus’ spread.

“Gag is the structural molecule for the virus. It binds and packages the genome, which is the blueprint to pass on to the next cell,” he explains. “The other core component is Envelope. You can think of Envelope as being like a virus’ key to enter into the next cell … so it’s ferrying the genome to the next susceptible cell.” Without this meeting of Gag and Envelope, HIV cannot spread from one cell to the next.

But figuring out why that is and how to prevent that meeting are questions that remain unsolved. “It’s basically like a whodunit murder mystery: who, what, when, where, how and why,” van Engelenburg says. “With the tools we have developed, we are able to track single molecules of envelope, and we are able to image single virus assembly sites on the surface of infected cells. With this ability to interrogate what we call the spatiotemporal dynamics, essentially the ‘when’ and the ‘where,’ we are now quantitatively describing how and when Envelope and Gag find each other.”

In doing so, van Engelenburg plans to develop a set of rules that illuminate the functions of even the tiniest segments of the virus. “We are now going back in and mutating the virus by just taking out little pieces of the region where we think these two proteins might be interacting and asking whether this prevents Envelope and Gag from finding each other,” he says.

To make headway on this problem, van Engelenburg has developed his own microscopes, capable of taking on highly specific functions tailored to his research. “A fundamental theme of my laboratory is that we start with a biological question, and then we develop the technology to answer it,” he says. “My philosophy for science has always been that I want to be able to measure things that no one else can measure.”

For example, when van Engelenburg and his team wanted to measure the displacement of a molecule, they needed a microscope capable of capturing rapid, minute movements. So, he started with a camera capable of running at 100 frames per second — three times the rate at which your television displays images — ensuring that not a single hop of the Envelope molecule would be missed.

In total, van Engelenburg has built three microscopes in his lab, carefully devising models on the computer, ordering parts, bolting components together and making adjustments through trial and error. It’s a process he honed during his postdoctoral work at NIH, where he worked under revered biologist Jennifer Lippincott-Schwartz. She helped develop imaging technology alongside physicists who won the Nobel Prize in Chemistry in 2014, instilling an understanding of the importance of cross-disciplinary work in van Engelenburg.

“I’m training my graduate students to be very interdisciplinary,” he says. “Modern problems in health and disease can’t be tackled by just one discipline anymore. We have to leverage the strengths of a lot of disciplines. What I work to do is to teach them a lot about cell biology, a lot about virology and a lot about microscope principles.”

Although van Engelenburg’s research doesn’t specifically aim to develop a cure for HIV, it could demystify especially tricky aspects of the virus and of similar viruses. Once drug makers understand the specifics of the Envelope-Gag partnership, Engelenburg explains, they could target that interaction and stop the virus before it can devastate.

“I always saw HIV as being a grand challenge,” van Engelenburg says. “It’s persisted for so long, and we are usually so good at stopping these things. … I really strongly believe that if we can understand how assembly occurs, we can potentially find an Achilles’ heel of sorts to jam up this very intricate process."