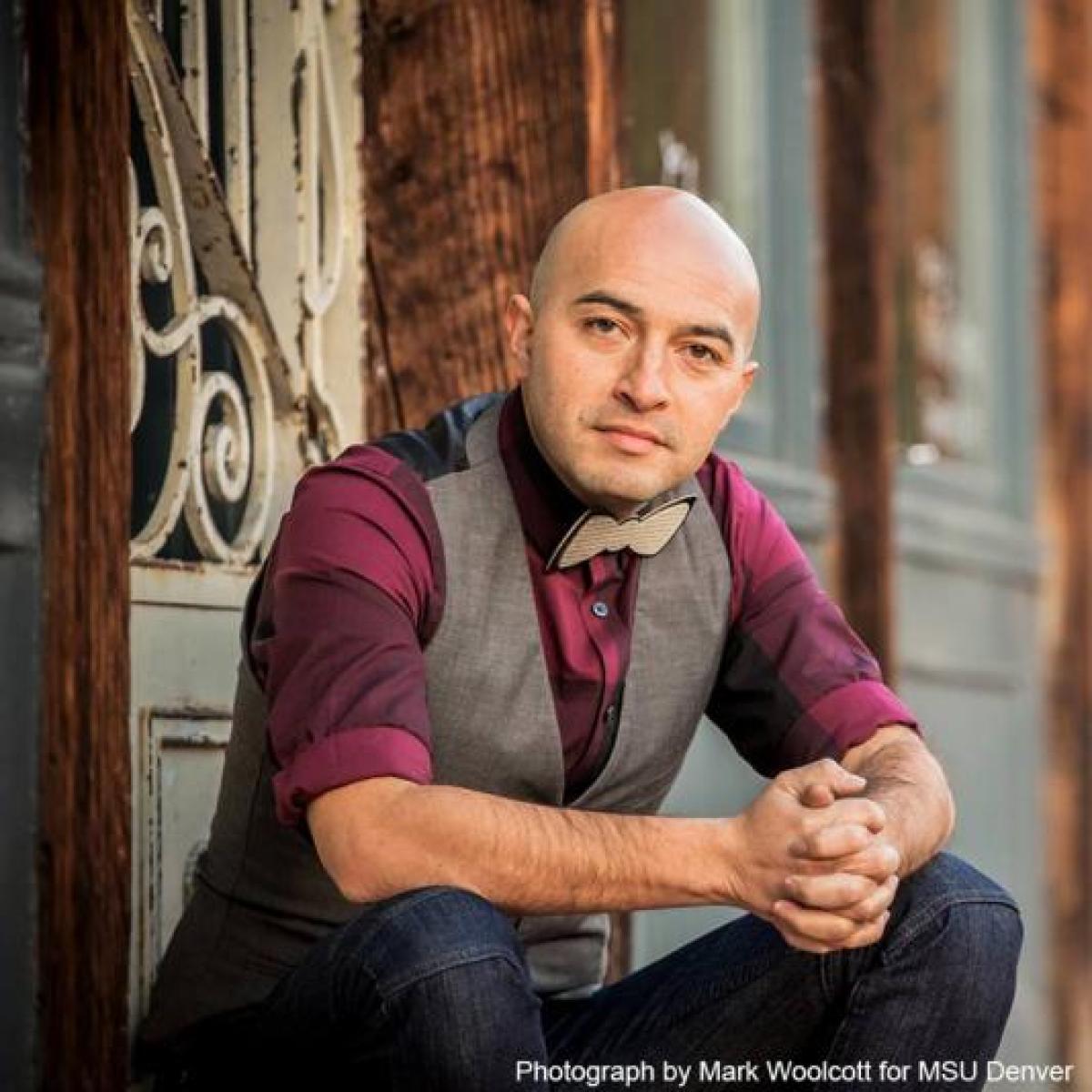 As his email signature will tell you, Bobby LeFebre is many things — word architect, performer and cultural worker, to name just a few.

And as of July 23, he’s Colorado’s eighth poet laureate. But he’s certainly not a literary eminence out of central casting.

You won’t find his works splayed on a page inside a bound volume lost on a shelf. And he’s not a wordsmith who versifies between hushed readings before small circles of aficionados.

Instead, he’s a spoken-word artist whose works you’ll hear and feel as they pulsate around a packed auditorium. He’s a University of Denver alumnus whose YouTube clips and social media posts you’ll populate with expressive emojis. And at 37, he’s the state’s youngest poet laureate ever — not to mention its first poet laureate of color.

Buckle your seatbelts, Coloradans. It’s going to be an interesting few years.

“I was pretty excited that the governor and the selection team decided to do something different,” LeFebre says. “I think poets laureate of the past — not only here but in cities all over the nation — have traditionally been [drawn from] a small representation of what constitutes poetry and what poetry can mean. To take it from this heady academic tradition to a newer aesthetic and approach, I thought was very bold.”

Bold enough to make heads spin. LeFebre’s appointment had hardly been announced before the hum of surprise intensified to a buzz of excitement. “Two weeks in, and it’s already been amazing,” he says. “In the first week, for context, we received somewhere between 30 or 40 requests for appearances and readings, and according to [the two organizations that administer the laureate program], that’s sort of an unprecedented amount.”

Colorado Gov. Jared Polis appears to have anticipated the robust reception. As he noted in his remarks at the announcement, “Bobby LeFebre has an amazing ability to empower and connect communities through the wisdom of his words. … He embodies the spirit of a ‘Colorado for All’ where everyone is included, no matter their background.”

LeFebre is still figuring out just how he wants his four-year term as laureate to unfold, but his plans all hinge on inclusivity.

“I want to center, elevate and amplify marginalized voices — voices that have traditionally been left out of this position, voices that have not been reached, stories that have been undertold,” he says. “What that looks like, I’m not quite sure.”

Still, he has a few ideas. He’s eager to rock the coffee shops and school gyms and theater stages where he will share his work. “I’m really excited about bringing back the performative nature of poetry — the communal aspects of it, the oral traditions. I think that for too long we relegated poetry to books and to heady academic settings. I really want to humanize poetry and show how it can be useful in people’s everyday lives,” he says.

And along the way, he hopes to stimulate some dialogue about life in our tumultuous times. “I keep my ear to things happening, locally, regionally nationally, around the world, and I try to find the common threads of all those things. What does it mean to call a place home? What does it mean to have the desire to belong somewhere? How do we get across these divides and differences that are really tearing us apart? I think that poetry is an amazing forum to discuss those things. I want to challenge people. I want to go into places [where people] may think differently than I do, have dialogue and really engage in those conversations.”

A Colorado native, LeFebre grew up in a family and neighborhood that gave him a profound appreciation for place. “My family has lived in North Denver for generations. My great grandparents moved into north Denver in the ’60s, my grandparents, parents and I still live there, own homes there. That’s been our home base,” he explains.

He came to performance via an eighth-grade theater/history project about Jackie Robinson breaking baseball’s color barrier. “I played a racist baseball player that didn’t want to have Jackie Robinson on the team,” he recalls. And he came to poetry soon after, recording his own rhymes and raps in a journal. “I’ve been a student of and participant in hip-hop culture for a long time,” he says. “Listening to hip-hop informed the faculty I have for language.”

After graduating from North High School, LeFebre went on to earn a degree in psychology from Metropolitan State University of Denver. By the time he enrolled at DU — in a master’s program focusing on arts and culture at University College — he had emerged as a driving force in Denver’s alternative poetry scene, winning major slam poetry awards and founding Café Cultura, a nonprofit cultivating the creative voices of youths from Latino and indigenous populations.

His Denver stomping grounds inspired one of his most recent efforts, “Northside,” a play that follows a handful of couples living in a neighborhood confronting rapid demographic and social change.

“My goodness. The play was an amazing experience for me. It was about five years in the making, from first draft to full stage production. We did pretty much an impossible thing in selling out 23 consecutive shows in a 250-seat theater,” he says. The show was so successful that three encore performances have been scheduled for Aug. 23–25 at Su Teatro Cultural and Performing Arts Center.

“The reason it was so popular is because it is about a subject that I think this city is openly [exploring] now: ‘gentrification.’ It’s affecting a lot of people, and I think neighborhoods all over, not just mine, in East Denver and West Denver are experiencing it. It’s sort of a communal pang that is causing us to enter conversation about it,” he says.

LeFebre credits a lot of his occupational dexterity — “I am a rare mix of artist, arts administrator and culture worker,” he says — to University College. For one thing, he studied with outgoing poet laureate Joseph Hutchison and took advantage of every writing class on offer. For another, he embraced opportunities to hone his skills in arts administration and promotion. By the time he graduated in 2013, he had learned to be a better wordsmith and a better advocate and activist.

“I wear many hats in culture, and the program was designed in a way in which I was able to further my education in all those different areas,” LeFebre adds, noting that he puts his skills to work in countless ways — as a board member of the Clyfford Still Museum, for example, and as a member of the Latino Cultural Arts Center’s advisory council. And no doubt he’ll put them to work as poet laureate, though first he’ll need to stop marveling over the news.

“Truth be told,” he says, “there are so many people who could be here. I’m grateful it’s me, but there are tons of amazing writers and poets in this state [who] could be in this seat. I want to use this position to bring others along on this crazy journey.”