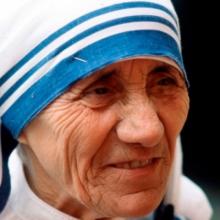 This Sunday, nearly 20 years after her death, Mother Teresa will be made a saint. She is best known for founding the Missionaries of Charity in Calcutta, India, which has more than 4,500 sisters and locations in more than 130 countries, including a mission here in Denver.

Gregory Robbins, chair of DU’s Department of Religious Studies, says Mother Teresa was able to draw global attention to the plight of those she served. “She was a Roman Catholic working in and on behalf of a non-Christian culture,” Robbins says. “She is a symbol of open-hearted, self-sacrificing compassion.”

The process to sainthood isn’t a “slam dunk,” Robbins explains. Once an individual is nominated for canonization and their name is admitted for consideration, a case is built. But this process cannot begin until five years after the individual’s death — unless, however, the waiting period is waived by the Supreme Pontiff. This was done in the case of Mother Teresa when Pope John Paul II waived three years of the period.

She’s very much a saint for the modern world.
Prof. Gregory Robbins Department of Religious Studies

Arguments against canonization can be submitted as well. “This is where we get the phrase ‘devil’s advocate,’” Robbins says. In Mother Teresa’s case, the late writer and adamant atheist Christopher Hitchens, a longtime critic of the nun, was called by the Vatican to provide evidence against her canonization. He claimed that “her intention was not to help people, but instead expand the number of Catholics.” Officials responded to Hitchens’ criticism by saying they “investigated and found no obstacle for Mother Teresa’s beatification, thereby bestowing on her the title ‘Blessed.’”

An essential element in the next stage of the canonization process is a requirement that at least two miracles corroborate the candidate’s sanctity. In Mother Teresa’s case, the miracles approved by the Vatican included the healing of an Indian woman whose abdominal tumor disappeared after a Miraculous Medal that had been touched to Mother Teresa’s body was placed on the woman’s stomach. The other miracle involved a Brazilian man whose wife prayed to Mother Teresa when he was suffering from a bacterial infection. He made a full recovery and went on to have two children, which doctors had said would be impossible. 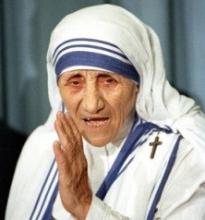 Mother Teresa’s canonization takes place during the Year of Mercy, a time for the Catholic Church across the world to focus on forgiveness and healing. Following canonization, she will be known as Saint Mother Teresa, the woman celebrated for this summation of her life’s work: “By blood, I am Albanian. By citizenship, an Indian. By faith, I am a Catholic nun. As to my calling, I belong to the world. As to my heart, I belong entirely to the Heart of Jesus.”

“She’s very much a saint for the modern world,” Robbins says. He and other scholars expect that the canonized Mother Teresa will live large in the world’s imagination and in cultural discourse, not just because of her faith, but also because of her struggle to believe. Given that, she’ll be more than a plaster-of-paris saint, Robbins says, noting that her diaries reveal a decades-long, existentialist crisis of faith, an experience of what she described as God’s absence, God’s silence.