In literature and in life, a toolbox signifies problem solving and resourcefulness. At the building housing the Daniel Felix Ritchie School of Engineering and Computer Science, a vintage red toolbox, displayed on the lower level, also calls to mind the can-do determination that powers entrepreneurism and innovation.

The toolbox in question once belonged to the school’s namesake, father of the University’s 16thchancellor, Daniel L. Ritchie. It was presented to the University by Thomas Michael Ritchie, the youngest of Ritchie senior’s two sons. The brothers remember the toolbox as a much-used, ever-present fixture at their father’s farm machinery business in China Grove, N.C.

“It’s a symbol, to my mind at least, of commitment and of professionalism, of how [Ritchie senior] took care of his customers. If something needed fixing or if he’d made a mistake, he’d correct it without asking questions,” Daniel L. Ritchie recalls.

Daniel Felix Ritchie — who earned a mechanical engineering degree from North Carolina State University — started his company after losing a job in Illinois at the height of the Great Depression. In those days, his oldest son recalls, many farmers still worked the soil with horse-drawn implements. Cash-strapped and content with the old way of doing things, these farmers were slow to invest in new-fangled tractors and machinery.

“He decided he wanted to go into the farm machinery business at a time when everybody thought that was a crazy idea,” Ritchie recalls. “The banker that he went to to borrow money told him so and said, ‘You’ll not make the salt in your bread.’”

Despite these discouraging words and the veto of his loan application, Daniel Felix Ritchie was not deterred. “He did it anyway, and he succeeded,” his son says. “And at that time, that was the leading edge of entrepreneurship. … He went on to build a very successful business, replacing horses with tractors and gasoline with diesel.”

With hindsight, the venture seems like a sure thing. It’s easy to forget, Ritchie notes, “how brave, how remarkable, how ‘foolhardy’ it was to do.”

Ritchie credits his father with more than just business acumen. “In my life, he did two things that really changed my life. One was persuading me to join the Boy Scouts. … Then, when I was in high school, the year before I was to graduate, I told him that I was quitting school, that it was a waste of time, that it was boring and useless. I didn’t ask him; I told him. And he said, ‘Son, we’ll find you a school that will be interesting and challenging. And we found a school in Virginia — Woodberry Forest, a private school that did indeed change my life. We couldn’t afford it, but I didn’t know it until years later. He played a very pivotal role in my life, and I’ve been grateful ever since.”

Ritchie’s time at Woodberry Forest led to a scholarship to Harvard and ultimately paved the way for his career success, which included an eight-year stint as CEO of Westinghouse Broadcasting and a 16-year term as the University of Denver chancellor. In recognition of his father’s role in his life and his approach to business, he presented the University with a naming gift — valued at $27 million — that made construction of the new Ritchie School building feasible. The 130,000-square-foot facility opened in October 2016. 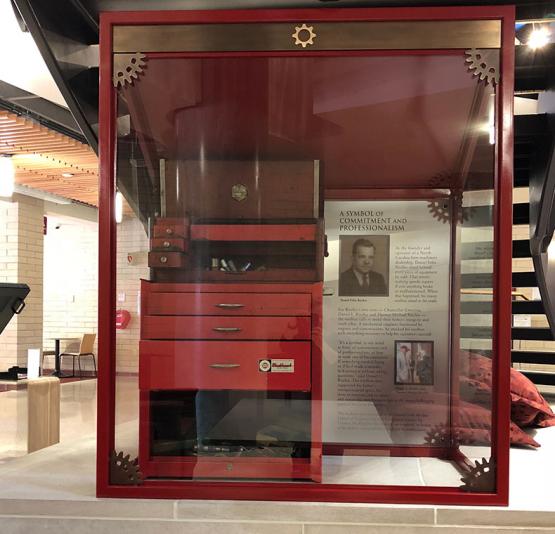