Lauren Abman admits that an exhibit on social practice art isn’t the easiest thing to install in a traditional gallery. The form relies so much on human dynamics and community participation, she explains, that sometimes the best a gallery can do is offer visual documentation of a project after it has taken place.

Take, for example, the work of Maria Molteni, one of eight artists featured in “Making Art/Making Community,” which opened last week at DU’s Vicki Myhren Gallery. Among Molteni’s many socially conscious projects is a collective that creates colorful handmade nets to be installed on empty basketball hoops in disadvantaged neighborhoods.

“She thinks a lot about bringing attention to underserved neighborhoods and about community participation through sports and the aesthetics of sports,” says Abman, a staff member in the School of Art and Art History who makes her DU curatorial debut with “Making Art/Making Community.” “These are functional, too, because they become these beautiful art nets that hang in empty hoops to bring attention to how important these spaces are and to bring some love and care to them.” 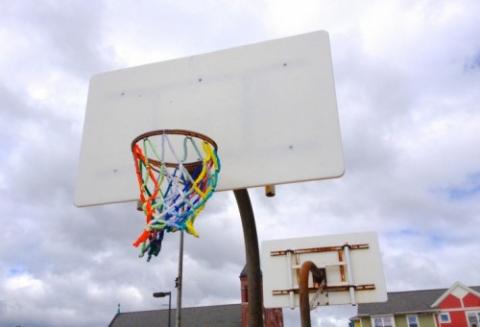 But how best to display the work in a way that captures all facets of its social critique and community function? Abman settled on an installation that features a number of the multicolored nets, along with video footage of other nets being put to use. She also invited Molteni to the exhibit opening, where she taught visitors how to make their own nets.

“That’s been a bit of a challenge with this form of artwork — a lot of it takes place outside of the gallery, so thinking about how to build an exhibition that’s visually exciting has been a little bit of a challenge,” Abman says. “It’s definitely narrowed the scope of some of the artists I’ve selected.”

The exhibit asks visitors to put on their thinking caps before entering, and to come ready to engage with the work and to carry its messages into the community. Attendees who encounter Paul Shortt’s “Reserved for Loitering” signs, for instance, may find themselves thinking about, as Abman puts it, “what does loitering mean, politically? Who has agency to loiter; who gets kicked out of spaces if they’re considered to be loitering?”

The DU exhibit will feature photos of the “Reserved for Loitering” signs in various public places, as well as signs that visitors can take and place in their own community spaces where loitering may not always be welcome.

“Having this takeaway makes a public audience member think about how they can relate to the artwork and be a part of it and be part of the construction of this larger project,” Abman says. “Paul always refers to the gallery feeling a little bit like campaign headquarters for ‘Reserved for Loitering.’”

Other artists in the show include Denver-based Frankie Toan, who raises questions about privacy and public spaces by examining how domestic spaces are depicted and shared on Instagram. Still another artist, Emmy Bright, uses playful line drawings to illustrate deceptively complex questions about social roles and interactions.

In addition to last week’s opening reception, several special events are slated in conjunction with “Making Art/Making Community,” including home tours with Frankie Toan on March 16 and April 14 and an April 11 tarot card reading by Bright, who uses a special deck inspired by her drawings.

“A lot of social practice art is very conceptually driven, so I hope that people really think about the power dynamics that are represented in each piece and then reflect on their own relationships, both within the community here at DU and then the larger community outside of DU,” Abman says. “One impetus for putting together the show was looking at IMPACT 2025 (DU’s strategic plan) and thinking a lot about the bridging strategies that artists use and how artists work actively in communities to help people rethink the way we’re interacting in our day-to-day lives.”

“Making Art/Making Community” runs from March 8 through April 29 in the Vicki Myhren Gallery inside the Shwayder Art Building, 2121 E. Asbury Ave. An opening reception is scheduled from 5 to 8 p.m. on March 8. Regular gallery hours are noon to 5 p.m. Tuesday through Sunday, with extended hours until 7 p.m. on Thursdays. Visit vicki-myhren-gallery.du.edu for more information.