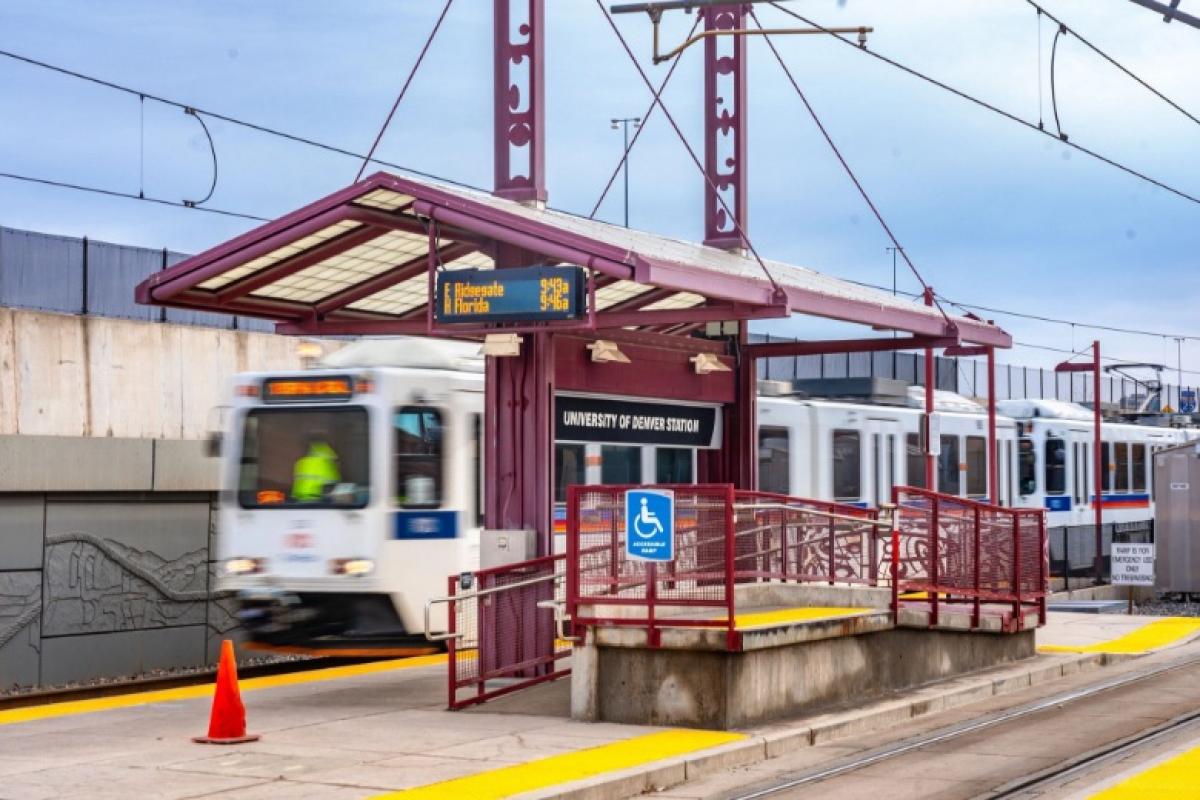 This article originally appeared in the Summer 2021 issue of University of Denver Magazine. Visit the magazine website for bonus content and to read the article in its original format.

As the COVID-19 pandemic shut down the City and County of Denver in spring 2020, the Regional Transportation District’s buses and trains dutifully kept running. The only problem: There was no place to go.

“It’s almost like the worst of all worlds when you think about it in terms of a pandemic and transit,” says Andy Goetz, a professor in the College of Natural Sciences and Mathematics who specializes in transportation and urban studies. “Simply because of the concern about spreading COVID on trains and buses, that caused a lot of people to rethink how they would get around for whatever it was they needed.”

While nearly every sector of the economy felt the pain of the pandemic, few took it on the chin like the world’s transit agencies. Ridership in the United States dropped by nearly 80% in 2020, according to the American Public Transit Association. Despite stepped-up safety protocols, passengers remained cautious and wary. An RTD study found only 18% of respondents felt safe onboard, fewer than those who felt safe visiting friends or patronizing a grocery store.

In response, RTD suspended or eliminated service on some of its bus routes, determined to support its busiest lines, including those that serve hospital workers and other first responders.

For the sake of safety, the agency waived fares for all riders in April 2020, allowing passengers to board from the back of the bus. But the bigger hit to revenue came from decreased collections in sales and use taxes. These make up more than half of RTD’s assets.

Although the business world is beginning to gain a foothold with the widespread distribution of COVID-19 vaccines, Goetz estimates RTD’s pain is far from over.

“They’re facing shortfalls not only this year, but for several years into the future,” he says. “They’re anticipating that ridership won’t get back to 2019 levels until 2025 at the earliest. So this is a multiyear hit that transit is taking.”

What will transit look like in a post-pandemic world? The unprecedented circumstances have spurred plenty of changes, and not all for the worse.

Beginning this summer, RTD will launch a study on reducing its fares, with an eye toward shedding its title as one of the most expensive systems in the country. A new law, signed in May by Colorado Gov. Jared Polis, provides the agency new flexibility to tinker with what it charges.

Plus, an influx of federal funding from COVID relief bills and a new infrastructure package could aid the creation of a new Front Range passenger rail system stretching from Fort Collins to Pueblo. Goetz says RTD may be able to use those tracks to finish its long-delayed B Line to Boulder and Longmont.

Ultimately though, Goetz says, transit will be forced to overcome the same challenges it had before the pandemic—competing with the convenience of a car and doing so in an environment likely more amenable to remote work. Plus, Goetz expects enthusiasm for new transit projects to cool, blunting the opportunities to expand technology and reach.

“The problem going forward is just going to be, how do you generate that level of support when your ridership is going down?” he says. “That’s going to be a tough struggle politically that a lot of people are going to have a hard time supporting. Both here locally and what’s likely going to be the case nationally, we’re going to see transit really struggling.”

Even so, when Goetz takes a wider look at the landscape, he sees reasons for optimism. Environmentally, the pandemic has facilitated some of the changes transit was designed to accomplish.

“One of the things that we’re trying to do overall is to reduce the negative impacts that travel has: using energy, [increasing] emissions in terms of greenhouse gases, more air pollution, local air pollution,” he says. “There’s a real benefit to reducing the demand for travel overall.”