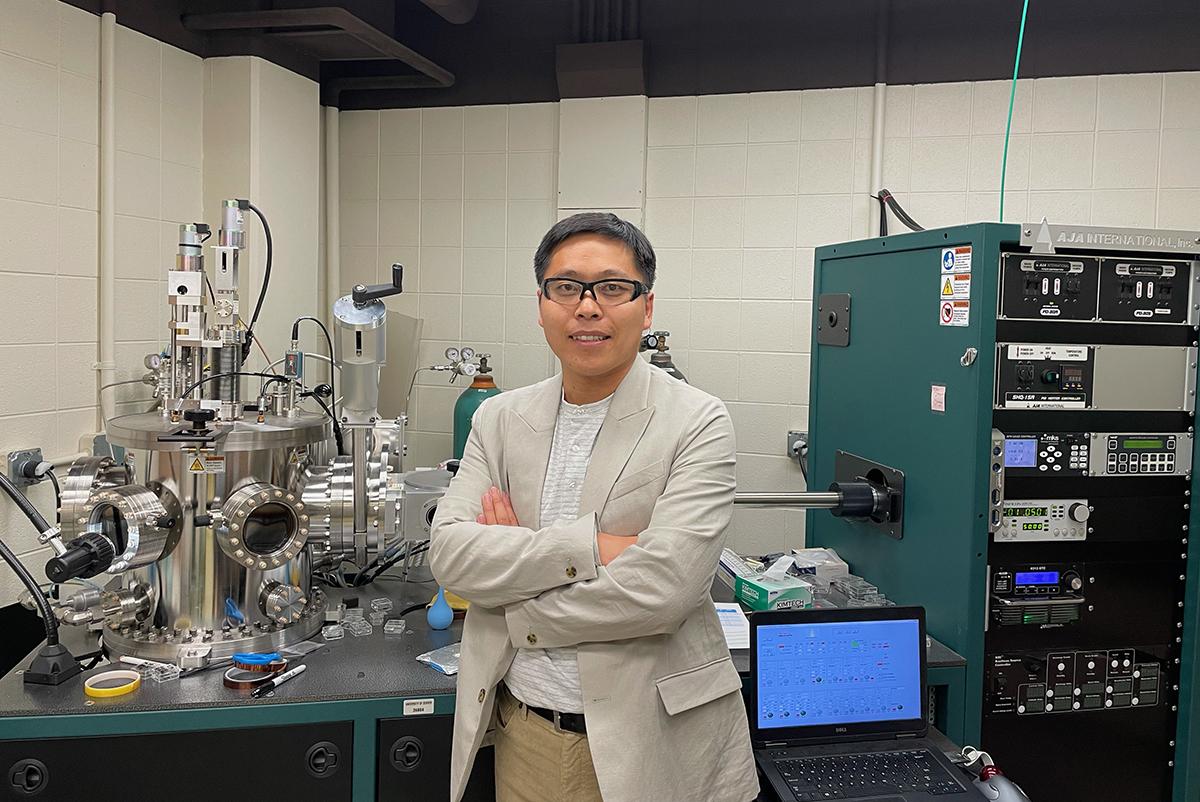 Picture this: You’re 10 pages into a major project or paper, and suddenly your laptop loses power. When you finally get it running again, you find that your hard work has vanished from the computer’s memory.

Xin Fan, assistant professor in the University of Denver’s College of Natural Sciences and Mathematics, aims to solve this problem to aid both consumers going about their daily lives and institutions like the military — all at risk of losing sensitive information at the hands of volatile computer memory. To do this, he’s exploring the potential of new magnetic materials.

“The overarching goal for this particular research is to build the next generation of computer memories,” Fan says. “[We] are trying to explore new types of memories that can be both fast and also nonvolatile, meaning you can store the information for a very long time, even during power failure.” Just as important, he explains, the research aims to make these new memory types energy-efficient and cost-effective.

Fan’s work has caught the eye of the National Science Foundation, which recently awarded him its prestigious Faculty Early Career Development Program award — CAREER for short. The award recognizes and supports early-career faculty who show great potential, both in intellectual merit and broader research impacts, and helps them build a strong foundation for future efforts.

While magnets have long been used for computer memory, efficiently manipulating these magnets remain a challenge. Fan is working to grow asymmetric materials using a vacuum chamber. The goal is to generate something called out-of-plane, spin-orbit torque to control nanomagnets. Fan explains spin-orbit torque this way: Every electron spins along its axis. Using an electric current, scientists can align the spins of various electrons. Together, these newly aligned electrons can alter the magnetic orientations of nanomagnets, allowing them to be used in applications like computer memory.

While one part of Fan’s CAREER research aims to generate new asymmetric materials capable of generating out-of-plane spin-orbit torque, another will focus on understanding the fundamental physics of these new materials. That’s because, as Fan explains, when you break symmetry, it’s possible to observe new phenomena and effects that haven’t been seen before.

“We do care about the overarching goal and applications, but on our end, we also care about the fundamental mechanisms — understanding how something works and hopefully how they potentially can be useful,” Fan says. “You want to understand all the fundamental mechanisms so that in the future, if other people use similar materials or other people see similar phenomena, we will be able to explain that and hopefully even predict new materials.”

Along with funding his research and allowing Fan to build new tools for categorizing, observing and analyzing magnetic materials, the CAREER award will allow Fan to engage with the academic community in new ways.

During the pandemic, Fan and a colleague devised a series of 71 seminars for spintronics researchers across the world. Thanks to this grant, he’ll continue these seminars, strengthening communication among a global community of scientists and allowing for greater knowledge sharing.

What’s more, the grant will allow him to connect with students in new ways.

“As a physical educator, I know that hands-on demonstration is very important to convey ideas, and demonstrations for magnetism particularly are lacking. But now we all have smartphones,” he says. “By downloading the proper app, we're able to do magnetic-field measurement. We're able to do microwave measurement and even optical measurement with just a smartphone. I'm proposing to develop modules to enhance the learning in electricity and magnetism.”

While the COVID-19 pandemic delayed both this aspect of the project and Fan’s larger research, the work is now in full swing, and Fan’s lab is buzzing with student activity.

“I actually have students involved in everything about this research,” he says. “Students are involved with designing the actual experiment and building the actual tools. Then they help make the materials, categorize the materials and write the paper. Pretty much everything will have the grad students involved in this process. I think that's the best way to train the grad students for the future STEM workforce.”