One Book One DU Begins a New Journey for New Students

When the 1,400-plus members of DU’s Class of 2021 report to new-student orientation in early September, they’ll have at least one thing in common: J.D. Vance’s “Hillbilly Elegy.” 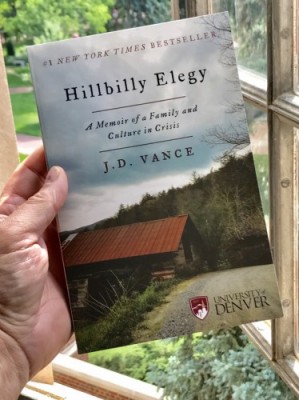 The bestselling book, a memoir chronicling what the author calls “a family and culture in crisis,” is the 2017–18 selection for One Book One DU, a common reading program that aims to set the stage for an intellectually lively undergraduate journey. At the start of that voyage, says Jennifer Karas, associate provost for academic programs, first-year students will encounter the different perspectives, experiences and opinions that shape discourse in a university setting.

“This is a program for students to reflect on who they are and what they are about to do in this transition,” Karas says. “[It’s about] how do you make new community? How do you become a member of an intellectual community?”

In the interests of jump-starting reflection, One Book One DU asks first-year students to dedicate a few hours over the summer to reading the book and responding to a prompt. They are asked to route their responses — which can range from a written essay to a performance piece or visual production — to their orientation leaders. Responses will be incorporated into orientation activities and, most important, into first-year seminars, where faculty members will lead discussions.

For “Hillbilly Elegy,” Vance’s account of his troubled upbringing in Appalachia, the prompt aims, in part, at stoking empathy: “Think of a person whose story has left a deep impression on you. Tell their story.”

Karas expects “Hillbilly Elegy” to offer plenty of fodder for wide-ranging, perhaps even controversial, discussions about everything from the culture of poverty and the role of public policy in addressing it to the unfolding opioid crisis and the economic devastation of rural and small-town America. Because of its insight into the plight of the white working class, the book has been referenced frequently in discussions about voter preferences in the 2016 presidential election.

To bring the rest of the DU community into the conversation, Karas is planning a series of faculty panels touching on some of the book’s themes. Specific topics haven’t been finalized yet, but expect the panels to draw on expertise from several different disciplines. An economist might examine the question of social mobility, while a sociologist might speak to culture and identity. Perhaps a geographer will address the book’s environmental landscape, while an English professor will discuss the art of memoir. 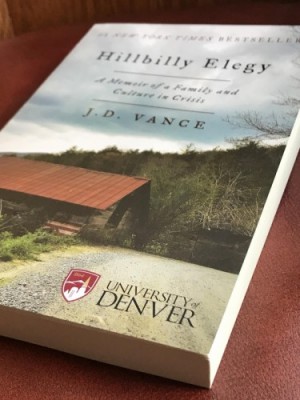 With One Book One DU, the University joins a host of institutions that begin building community in the weeks before first-year students arrive on campus. “So many institutions have a common reading program. It’s fun. It’s a way to engage people over the summer,” Karas explains, noting that each institution has its own take on the program. Some choose a book by a famous alum; others plunge students into the classics. Washington University, for example, is asking the Class of 2021 to read Mary Shelley’s “Frankenstein,” which turns 200 this year. First-year students at Texas State University, meanwhile, will read Bryan Stevenson’s “Just Mercy,” a young lawyer’s account of representing a client on Death Row.

DU’s twist on the program grows out of DU IMPACT 2025, the University’s strategic plan, which calls for enhancing the holistic learning experience and for building an inclusive community. The discussions and activities around last year’s selection — Thomas King’s “The Truth About Stories” — culminated in publication of “Many Voices, One DU,” an anthology collecting a dozen reflections from across the campus on identity, difference and community. Karas expects that this year’s program will culminate in a similar effort.

Although One Book One DU is only in its second year, the University believes so strongly in the common reading experience that it has provided copies of “Hillbilly Elegy” and mailed one to each first-year student. “Very few institutions purchase the book and give it to the students,” Karas explains. And few, if any, she adds, structure student reflection through a coordinated prompt.

As an added bonus, the copy students receive bears the University’s logo on its cover and a note from Chancellor Rebecca Chopp on the opening page. “As you read ‘Hillbilly Elegy,’” she writes, “I hope you will begin to think about how your environments and experiences shaped you—and how you can learn from your colleagues’ backgrounds and experiences. … We will learn from each other. That’s the adventure of education … .”