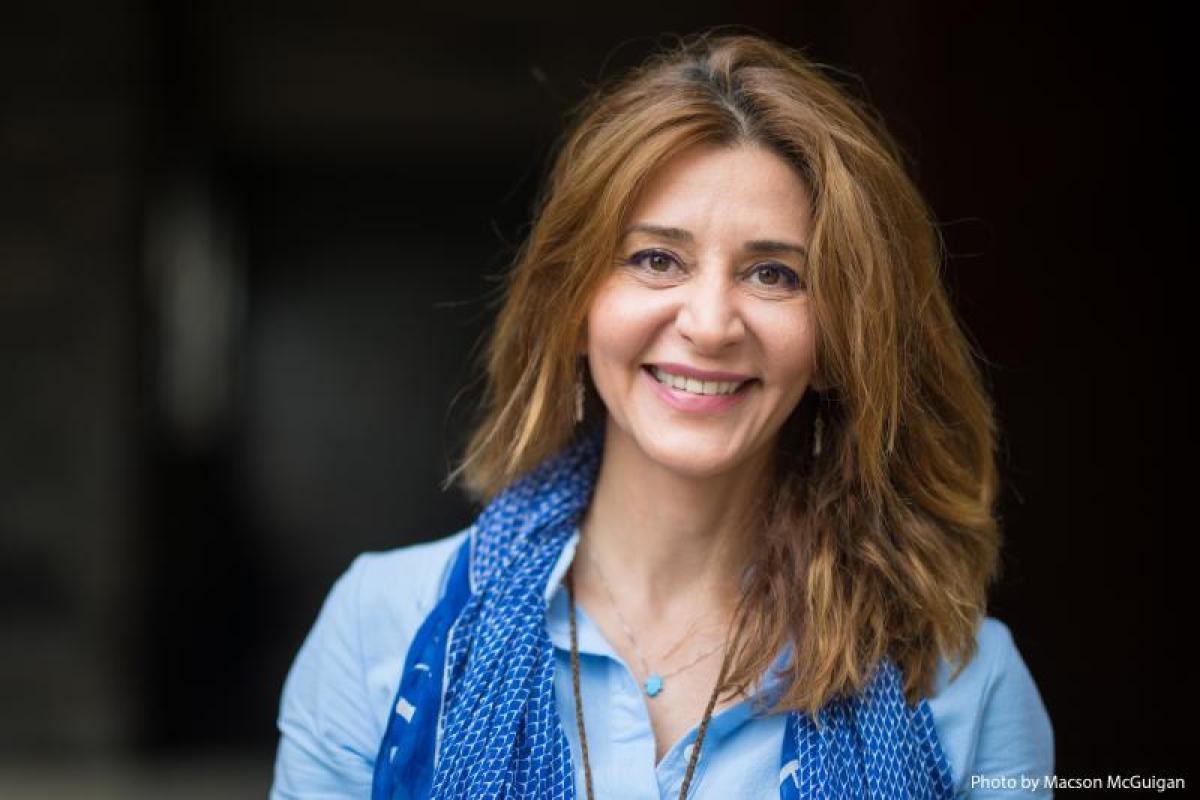 But when Al Sayed, practitioner in residence at the University of Denver, arrived in the United States in 2012, no one recognized her.

“Part of the [immigration] procedure is they send you to this office where they look at your background and what you’ve done to see if they are going to give you financial [assistance],” Al Sayed says. “The person looking at my resume was very impressed, but then said, ‘I’m sorry, but it’s not going to be easy. You’re a nobody now.’”

He was right about one thing — it was never easy. Al Sayed has spent the last eight years rebuilding a career and leaping through hoop after hoop in the immigration process. She has plenty to show for it: She earned a master’s degree from Tufts University’s Fletcher School of Law and Diplomacy, co-founded two successful media companies and recently became an American citizen. Now, she teaches a curriculum she designed in partnership with the Geneva Centre for Security Policy and the United States Institute of Peace. The curriculum marries media, the arts and peacebuilding and has been taught around the world, including here at DU.

During the 2019 fall quarter, Al Sayed taught a class in the Josef Korbel School of International Studies as part of the Sié Chéou-Kang Center for International Security and Diplomacy’s practitioner-in-residence program. The program brings prominent practitioners to DU to share their practical insights and expertise with students and faculty.

Al Sayed’s residency lasted 10 weeks, and during that time, she also worked with the Sié Center's Inclusive Global Leadership Initiative to bring programming to the larger Denver community, including a talk on social movements held at the RedLine Contemporary Art Center in Denver's RiNo art district.

There, she told the audience about the five countries she has called home: Kuwait, where she was born; Egypt, where she fled during the 1990 Iraqi invasion of her native land; Lebanon, where she finished her undergraduate studies in radio, TV and film; Syria, where she became a household name; and the United States, where she started her latest chapter.

Just a few years after Al Sayed moved to Syria to begin her career, the country began allowing private media. She took a job with one of the first radio stations to capitalize on that policy change, and found herself inspired by none other than the late Robin Williams. In the film “Good Morning, Vietnam,” Williams played a radio host broadcasting to soldiers during the Vietnam War. Al Sayed was struck by the need for uplifting media during dark times, so she adopted a similar tone on her own program, whose name paid homage to the film.

“I wanted to do things different than what the public radios do, which is very lecture-like and it’s classical Arabic and it’s serious stuff. I just wanted to break all those rules,” Al Sayed says noting that she speaks in Arabish, a combination of English and Arabic. “I want to talk with you and not at you. I’m going to engage you. You can call in. You can text in. … Then it turned into, wait a minute, I can work inside this system to try and create change.”

Al Sayed became a master of pushing the envelope just far enough, and that attitude and approach attracted 7 million people to her “new form of Syrian entertainment.” But with the start of the Syrian civil war in 2011, she found herself in a precarious predicament.

“When the revolution happened, there was a pull of everybody wanting [me] as an influencer to be their mouthpiece. This was really aimed at anybody in the media and the arts because we reached a critical mass and touched hearts and minds,” she explains. “It’s really powerful. If it wasn’t powerful, I wouldn’t have felt that I was forced to leave.”

After gaining temporary protective status in the United States, Al Sayed joined with three fellow members of the Syrian diaspora, displaced and living around the world, to form SouriaLi, which translates to Syria Is Mine. The online platform focused on peace journalism, and used podcasts to reach a regular following of 500,000 Syrians. “We couldn’t be there, but we felt like we had to do something,” Al Sayed says. “Whatever little differences we had didn’t matter. We all wanted Syria at the end.”

After three years with SouriaLi, Al Sayed decided to address peacebuilding on a global scale. Through her studies and research, she met Lindsey Doyle, a dancer and policymaker who eventually joined Al Sayed in founding a new company called MAP, Media & Arts for Peace. The creative, consulting and talent agency supports professionals from conflict-affected areas, diaspora communities and marginalized populations.

Its work also leverages media and the arts in the peacebuilding process, Al Sayed says: “Peacebuilding scholars and practitioners are recognizing more and more that cognitive rational engagement is not enough, and that’s where the media and arts come in as complementary tools. When constructively used, they are intended to create a safe space to foster communication and dialogue and therefore reconciliation.”

That’s just what she teaches through the MAP Academy, the educational arm of her company and the focus of her instruction at DU. “At the core of what we teach is the role of creativity, story and strategy [in peace and security],” Al Sayed says. “When we talk about creativity, it’s not limited to the arts. It’s how do you think differently? How do you think like an artist? Which means empathetically, out of the box and innovatively.”

Now that her time diving into that curriculum in a Korbel classroom has ended, Al Sayed is headed to Kuwait to visit family for the first time in nearly eight years. As she departs, she hopes she has left something behind.

“I really try to get folks out of their comfort zone so they are immersed in what we are talking about,” Al Sayed says. “You can get any of this information online, but it’s how you are experiencing it that makes the difference. I hope that was something I was able to do not just for my students, but for the community.”