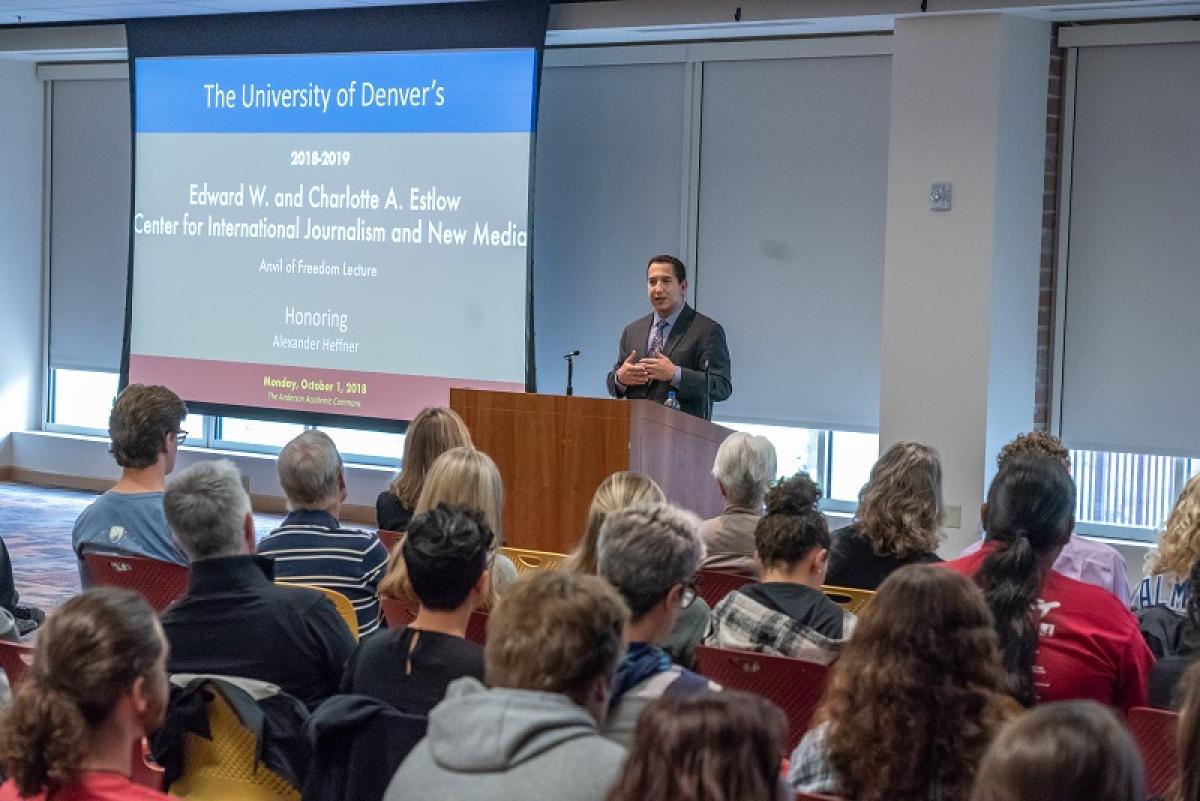 Alexander Heffner may be an objective journalist, but he would be the first to say he’s partisan. No, not a part of the “liberal” or “conservative” media.

Rather, the 28-year-old, who hosts “The Open Mind” on PBS, calls himself a partisan for truth, democracy and the free press.

Receiving the Anvil of Freedom Award from DU’s Estlow International Center for Journalism and New Media, Heffner told the next generation of news professionals that impartiality is not to be confused with an automatic acceptance of point of view in the name of “getting both sides of the story.”

“Keep an open mind,” he told the audience at the Oct. 1 award presentation and lecture, “but not so open that your brains fall out. That to me is the essence of ‘The Open Mind’ right now: confronting the threats to democracy and being determined to honor our traditions of democratic values.”

Heffner is the 26th journalist to receive the Anvil of Freedom, an award that recognizes a professional who exhibits superior leadership and a commitment to ethics, integrity and democratic freedoms, especially protection of the First Amendment.

“I think this is a time when journalism is under siege,” said Lynn Schofield Clark, director of the Estlow Center and chair of DU’s Department of Media, Film and Journalism Studies. “So it’s a good time for a place like the University of Denver to be able to recognize those who are literally putting their lives on the line in some cases to provide information to people that is not comfortable to people in power.

“To have a democratic, self-governing society, we have to have people who are willing to hold our leaders accountable,” she said. “A university like ours should be referencing people who did that.”

Each recipient is chosen with the center’s namesake, Ed Estlow, in mind. An alum and former DU trustee, Estlow championed integrity, strong storytelling and factual journalism. A Rocky Mountain News reporter, Estlow ascended to the role of CEO of Scripps-Howard.

Though Estlow died in 2015, his family still attends the eponymous lecture whenever possible. “It’s just like a continuation of our heritage,” said Nancy Gwin, one of Estlow’s four daughters. “We were newsprint babies. [The lectures are] always relevant. And they engage young people, which I love.”

Heffner’s experience as a young journalist — in high school, he founded the first online national student newspaper to cover the 2008 election — and his research on millennial news consumption made him a natural choice for the honor, Clark said. That’s not to mention the “civility” of his program, which Heffner touts as a foil to Meet the Press, Face the Nation and other “partisan Hollywood Squares” political shows. He prefers to interrogate ideas, he said, not people, with candor and awareness of the current environment.

For the Estlow daughters, who acknowledge their family has its own ideological differences, the message rang true.

“The political atmosphere, I think, has kind of eroded journalism today and is giving it a bad name and a bad rap,” said Susan Lyday. “I really am hoping with people like Alexander Heffner that we are bringing back some of the values and the integrity so that people will respect journalism.”