The Personal Lives of Crickets

Professor Robin Tinghitella in DU’s Department of Biological Sciences is accustomed to the fact that her research attracts a lot of curiosity. After all, who isn't interested in hearing about the courtship rituals of crickets? Especially when they involve males serenading females with elaborate, chirping love songs.

For Tinghitella, the fact that animal mate choice is inherently interesting makes it the perfect hook for introducing students and the public to the complexities of evolutionary biology.

“Animal mate choice is an intriguing subject that's fun to think about,” she says. “It’s easy for people to understand, and you can use it to draw listeners into more complicated evolutionary topics.”

At the DU Founders Forum on March 1, Tinghitella did exactly that in her presentation, “Grand gestures and love notes: animal mating communication in a rapidly changing world.” 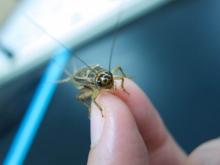 In her lab, she and a team of undergraduate and graduate researchers have been amassing a trove of data on the mating habits of crickets and fish. The research is broadly focused on how the sexes communicate with regard to mating decisions. Tinghitella is especially interested, however, in how environmental change — such as habitat fragmentation, noise and light pollution, and climate change — can impact the mating environment and shape mating decisions, with potential ramifications for evolution, hybridization of closely related species, and population extinction.

“Environmental change is a huge problem when species can’t keep up,” Tinghitella says. “Small changes in the environment perturb how animals communicate, with drastic results.”

In some cases, species are able to evolve rapidly enough to keep up with environmental change. Tinghitella cites an experiment that she undertook in Hawaii, where the mating strategies of male crickets were literally killing them — a parasitoid fly introduced to the islands from North America located males by their love songs and deposited fatal maggots inside their bodies.

Over the span of a few years, however, what was likely a single gene mutation resulted in males with a modified wing shape that left them unable to sing. These silent males, who were invisible to the parasitoid flies, had more mating success on fly-infested islands than chirping males, who were eaten by maggots before they were able to reproduce.

“People don’t grasp how quickly evolutionary change can result from subtle environmental change,” Tinghitella says. “Mating behavior is one of the factors that governs divergence between species, making the manner in which animals cope with changes to the mating environment really important for the preservation of biodiversity.”

As fascinating as her research is, Tinghitella reports that the most rewarding aspect of her job is the opportunity to mentor students.

“I really enjoy watching students who aren’t yet entrenched in the science come at things with fresh eyes and develop questions or perspectives that haven’t occurred to me,” she says. “That’s why I like being at DU. There’s a nice balance of teaching, research, and mentorship that you don’t find at other institutions.”

A core mission of DU’s Division of Natural Sciences and Mathematics is to offer students unprecedented access to research opportunities. By working alongside distinguished faculty mentors in state-of-the-art facilities, undergraduates and graduates are able to apply their newfound knowledge to research that changes lives and challenges ideas.