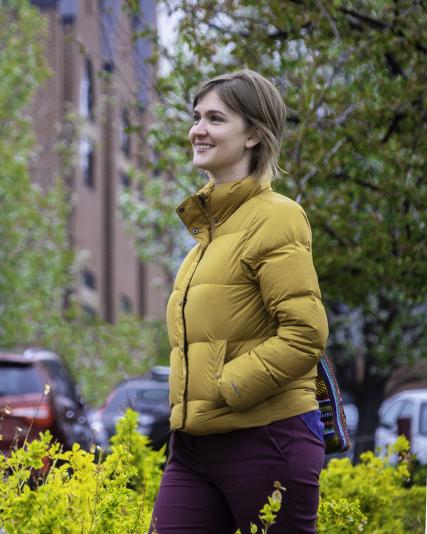 When Lauren Collins talks about her seven years at the University of Denver’s Morgridge College of Education, she speaks in questions.

“How can we create really transformational, impactful [study abroad] experiences?” she asks. “What would be the best way to carbon offset study abroad programs? … [And] how do we have more equal community partnerships?”

These are just a sample of the many questions she has posed during her time at the University. In June, she’ll collect her PhD in higher education before going on to post-doctoral position teaching at the University of Montana Honors College.

While at DU, Collins has been much more than a student. She has been a staff member in the Daniels College of Business, managing outdoor education and international student acculturation. She has been an instructor, preparing students for study abroad. She has been a graduate assistant in the Center for Sustainability, operationalizing the DU food pantry and exploring carbon offsets. And, she has served as a community engaged fellow with DU’s Center for Community Engagement to advance Scholarship and Learning (CCESL), where she developed a photo voice project for the city and county of Denver.

Collins has carved out areas of inquiry across campus, but that’s just in her nature. “I’m interested in problematizing things,” she explains.

Her inquisitive path began in an undergraduate oceanography course at the University of Hawaii. (Eventually she would transfer to the University of Colorado Boulder, where she pursued bachelor’s degrees in international affairs and Chinese.) As her professor lectured on how China and India contribute to carbon emissions, questions stirred. “How do we solve both challenges of economic development and sustainability at the same time?” she mused. “I was like, ‘Oh my gosh. I have to learn Chinese and go to China,’ like a very ignorant 18-year-old. Slowly I learned it’s not a simple solution.”

After studying abroad in Taiwan, Collins received a grant from the country’s Ministry of Education to return for a year after graduation, where she embedded herself in the community. After receiving her master’s degree in international studies at the University of Washington, she ventured to China (specifically Macau) on a Fulbright English Teaching Assistant Award.

“I went to Macau and worked in a university there for a year, which is when I realized I wanted to build a global career domestically in the U.S. rather than working abroad,” Collins says. “I was looking at different ways to pursue that and I realized that higher education was a field of study.”

That’s what brought her home to Colorado to study at DU. She began her tenure at the University as both a student and as a full-time employee at the Daniels College of Business. At Daniels, where Collins worked until turning toward sustainability projects in early 2017, her role focused on supporting international students and then on managing experiential learning programs locally and abroad. Questions began popping up again.

“How do we design learning experiences that are really profound and get into the heart space for students that can then change how they live later?” Collins asks. “How do we learn to listen rather than come and say, ‘We should change something?’ How do we show up in ways that benefit communities?”

These ideas form the basis of Collins’ research, conducted in partnership with the International Sustainable Development Studies Institute, which brings DU undergraduates to more than 20 different communities in Thailand that engage in sustainable practices. Focusing on three in particular, Collins conducted ethnographic case studies. She furthered her research by working with DU sustainability director Chad King and Cara DiEnno, associate director of CCESL.

For study abroad students, Collins identified great capacity for change at what she calls the “developmental edge.” There, she discovered, students found themselves stressed by an unfamiliar place, culture and language. The more willing students were to hop off that edge, the more they grew.

“In Thailand that could even be simple things like being willing to wear long sleeves and pants, which is hard when you come from a culture that is so much about freedom of expression through how you dress,” she explains.

Collins also looked at the impact of study abroad programs on host countries, noting that the third-party study abroad providers universities often employ to overcome such issues as risk management and capacity can be problematic. “There are a lot of amazing programs out there, but they end up bleeding some of the money out of communities and into other places. In tourism it’s called leakage,” Collins says. “Direct partnerships between educators and communities, if you take out the middle person, end up leaving more money in those places and having a higher impact.”

Collins hopes to share her interdisciplinary approach to research and education in her post-doctoral position. “I’ve been drawing on resources from sustainability, the Office of Internationalization, CCESL and other places to follow my path,” she says. “I think the honors college will be a cool space to continue doing that because I can teach in any department I want to.”

After her years at DU, moving on is both daunting and invigorating. “Change is always scary, but I’m just really excited to get to play in a different space,” Collins says. “I’ve really loved my experience, but it’s good to have closure and a next step, and I’m hoping to bring these different threads of interest to [my next] role.