When, in the course of just one season, you win nearly as many games as the program had won in the previous three seasons combined, it’s hard not to notice the changes.

“They simply let me coach them,” says head coach Jim Turgeon about the secret to his success during his first season as head coach of the DU women’s basketball team. “They tried to do what I asked of them, and they worked extremely hard. They completely bought in.”

That buy-in translated to an overall record of 16-14, the team’s first winning season in six years. The student-athletes credit the success to the faster pace of play and the mental toughness that Turgeon insists they bring to the court.

“He will tell us when something needs to improve, and he’s just very honest, which I like as a player,” sophomore Claire Gritt says of Turgeon. “If I’m not doing something the way I’m supposed to be doing it, to the standard of which something needs to be done, I want to be told that so I can get into the gym and get better.”

Getting better is everyone’s goal going into Turgeon’s second season. The Pioneers have already been projected to finish fifth in the Summit League, and Gritt has been named Second Team All-Conference. However, the Pioneers believe they can be better.

“I think being picked fifth in our conference, people are still underestimating us a little bit,” Gritt says. “I want to see 20-plus wins because I want to get better; I want our program and our team to get better. But our main priority is just taking this season game-by-game.”

The Pioneers love to play fast, share the ball and shoot a lot of three pointers. Last year that translated into an average of 70 points a game, and Turgeon believes this season they could average closer to 80.

“I probably changed our offense five different times last year to try and figure out what worked best,” he says. “We ended up being one of the top-scoring teams in the Summit League, and we’ve even tweaked it a little bit more this year to try and score more points. We will see when the games start, but I think we are significantly better.”

The season starts for the Pioneers on Friday night when they host the University of Missouri-Kansas City in the Hamilton Gymnasium. They know this year there will be no sneaking up on any opponents.

“Last year was really exciting, and it helped us really look forward and know that this program can be something that it wasn’t in the past,” says senior Samantha Romanowski. “Now going into every game you have that feeling that we can do something special here.” 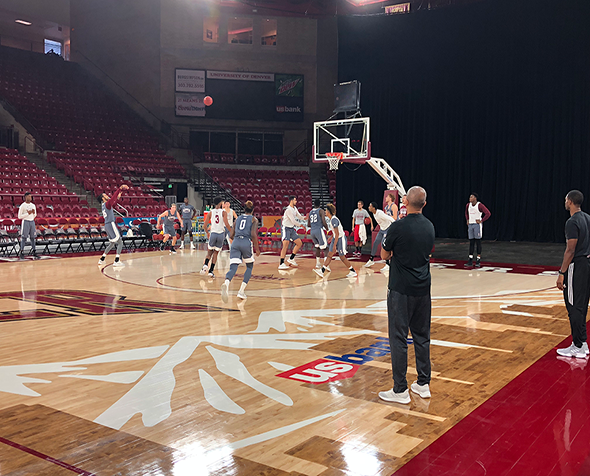