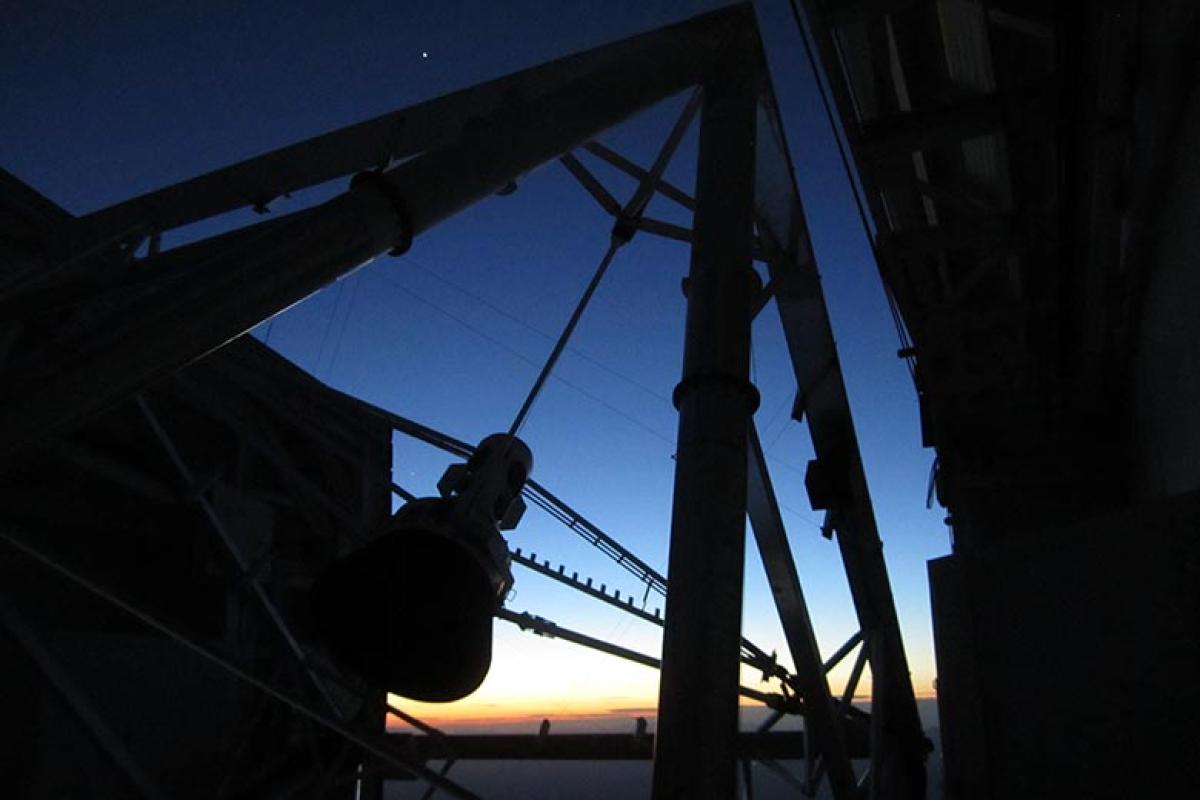 The telescope shown in both this image and the one below is located at the MMT Observatory owned by the University of Arizona.

What can you learn from something so far away it’s impossible to see, even with the world’s best telescopes?

Jennifer Hoffman, associate professor in the University of Denver’s College of Natural Sciences and Mathematics (NSM), has a few ideas thanks to her research on supernovae, massive star explosions. Conducted in collaboration with a team at the San Diego State University, her research aims to enhance our understanding of the transition from star to supernova through a measurement method called spectropolarimetry.

“A star is a big ball of hot gas, and for most of its lifetime it basically walks this really fine line, executing a balancing act between gravity, which wants to pull it inward, and gas pressure, which holds it up,” Hoffman explains. “For millions of years a star can survive like that. What happens in many cases though, is that something disrupts that equilibrium. Specifically, the star runs out of fuel in its core, which marks the end of its stable lifespan. The gravity will win, and the star will start to collapse.”

When the star’s core has collapsed to a breaking point, the rest of its material begins to fall onto itself and then rebounds in a grand explosion, known as a supernova. “I’m interested in that transition from the star to the supernova,” Hoffman says.

Her research has captured the National Science Foundation’s (NSF) coveted gaze, earning the collaborative project a $500,000 grant that will allow Hoffman to take on four new undergraduate students and two new graduate students as research assistants.

Hoffman’s supernovae research builds on previous work she conducted through a collaborative NSF grant with partners at the San Diego State University and the University of Arizona — a relationship that has allowed DU students access to world-class equipment, as well as the opportunity to work closely with a professor and peers on a significant project.

That project built a database of more than 150 supernovae, which were carefully observed and analyzed in a number of ways, including the use of a spectropolarimeter. This tool allows researchers to measure the polarization of light at different wavelengths and its use, says Hoffman, is rare in the supernovae community.

“With supernovae, there’s a source of light in the middle that is traveling outward and interacting with gas and dust surrounding it, and then getting redirected or scattered toward us and in that process, it becomes polarized,” Hoffman explains.

Understanding what that polarization means has the potential to unlock new information about supernovae.

“The cool thing [polarimetry] does is it encodes geometrical information,” Hoffman says. “If you can interpret it correctly, [the data] will tell you what the shape is of the gas that scattered the light. … What we end up with is a really complex picture of the shape of these things. They are really not spherical fireballs. They are asymmetric in complicated ways.”

In using polarization data to model each supernova’s shape, Hoffman can do what no telescope can: create detailed stories for that help illuminate what each star was doing in its final days before explosion. In doing so, Hoffman hopes to trace the complicated transition from star to supernova.

In that interest, Hoffman and her team members will revisit their original database and mine it for new information.

“So now we are going back and doing a little bit of a higher-level analysis. In the past we really focused on one supernova at a time,” she says. “But the real strength of the database is that we have multiple examples of similar objects, which we can now look at in comparison with one another — not just one at a time, but category by category.”

This exploration isn’t just about understanding the supernovae themselves. It’s also about understanding how they are interconnected with the universe and our very existence. Hoffman notes that supernovae have a powerful influence on their surroundings and can tell us important information, including what elements are spewing out into space and the conditions under which new stars and planets form.

“You’ve probably heard the Carl Sagan quote that we are all star stuff. All of the molecules on the Earth and in our bodies had to be created in stars,” she says. “How did they get to us? Well, they had to be expelled by a supernova into the galaxy and then later included in the next generation of stars. I really enjoy thinking about how this stuff connects with previous generations of star formation and what comes later in the grand scheme of what the galaxy looks like.