A Promising Report Card for an Innovation School

Designed and created by DU alums, the Denver Green School provides a model to replicate 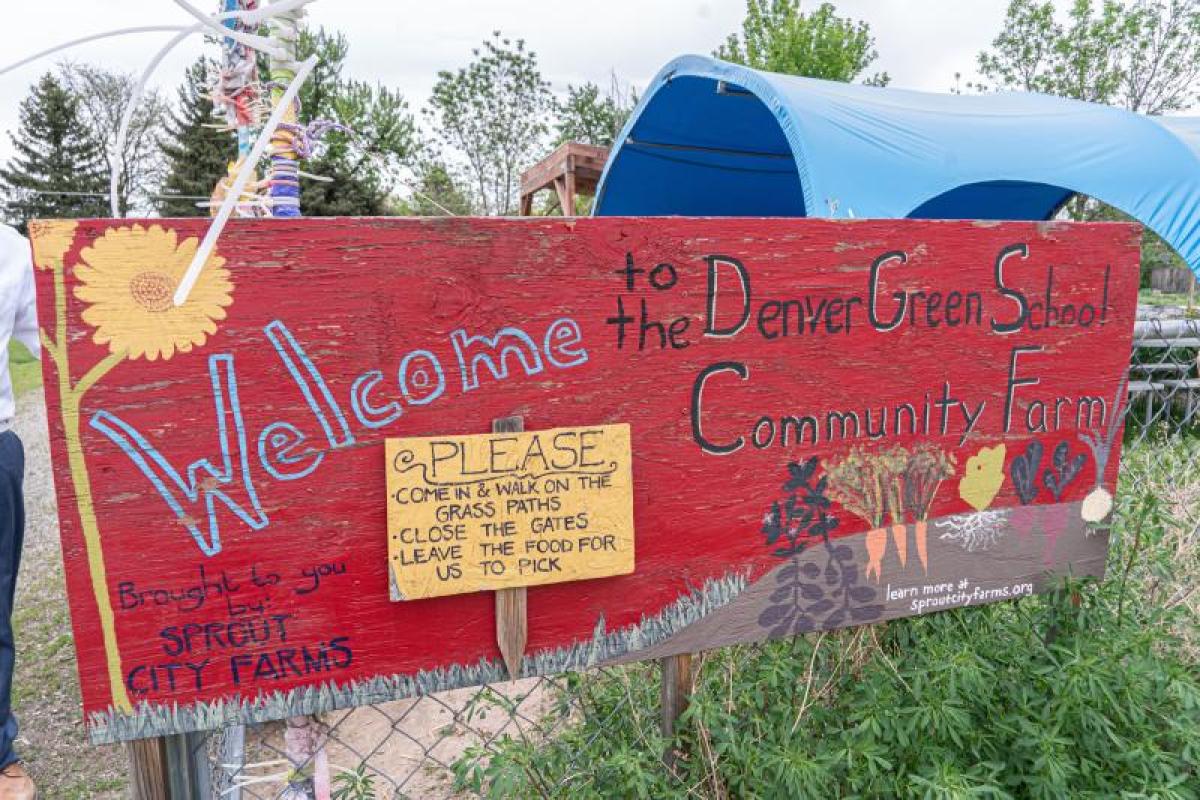 It’s early spring at the Denver Green School (DGS), where “sustainability” is the spelling word of the day, the complicated math problem du jour, a language arts theme, a social studies challenge and a philosophy for community.

Wondering how that all comes together in a program serving more than 570 elementary- and middle-school students? Just ask University of Denver alumnus Frank Coyne, one of the school’s several founders and one of its three “lead partners.” (Elsewhere, they would be called principals, but at the Denver Green School, traditional hierarchy hovers on the endangered concepts list.)

Dressed for the day as Captain Underpants and cheerleading a schoolwide nod to literary inspiration, Coyne is omnipresent — surveying the campus’ soon-to-be cultivated garden plots, asking about the productivity of the six resident chickens, high-fiving youngsters on the playground and staffing a classroom in need of a stand-in teacher. When he isn’t joking with a skulk of second-graders — they’re howling at his white-briefs-over-dark-pants ensemble — he takes time to tout the school’s signature spirit:

“If you walk up and down the hallways,” he says, “you can feel the joy factor.”

And sure enough, the delight is palpable — it pulsates from the Earth-themed art on the walls, in the rapid chatter of students and in the teacher value statements outside each classroom. Faced with this much sustainability-tinged exuberance, even the ever-blue, ever-glum Kermit the Frog would find it easy to be green.

All of this is more than happenstance; it’s the handiwork of a handful of alums from DU’s Morgridge College of Education — among them, Coyne, Mimi Diaz, Craig Harrer and the late Andrew Post, who died while the school was still on the drawing boards. Together, they and several others parlayed expertise acquired through Morgridge’s various offerings — particularly the Ritchie Program for School Leaders — into a neighborhood school that gets results. The kind of results that might leave many educators, well, green with envy.

Since it opened its doors nearly a decade ago, the Denver Green School has dished up its brand of eco-supportive education to students in the city’s southeastern neighborhoods. DGS is known for its cohesive curriculum, inclusive culture and cutting-edge leadership model. It’s also known as one of the highest performing entities — as well as one of the first innovation schools — among the 207 public schools making up Denver’s district. Without consulting so much as a cheat sheet, Coyne can cite data and recount history. DGS, he’ll tell you, consistently meets and mostly exceeds state specifications in key academic areas. Out of 513 middle schools in the state, it ranks No. 1 for growth in the English language arts. It’s in the top 2% of Colorado elementary schools for literacy growth. And to top it off, it serves a diverse population that comes from 33 countries and speaks 27 different languages at home.

Success also comes in the form of a long wait list; demand is so high that a second Green School will open this fall in Denver’s Stapleton neighborhood. What’s more, educators from other districts and states are lining up to learn about the school’s recipe for closing the achievement gap and retaining teachers. Coyne, Diaz and Harrer are forever sharing info about the school’s leadership model and its “hands-on, brains-on” approach to learning, which gets every student — from the youngest tykes in the early childhood education classroom to the special-education students in the autism program to the adolescents finishing middle school — up to their elbows in top soil and challenges.

By immersing them in firsthand experiences, Coyne says, “We’re hoping we are creating problem solvers for the 21st century.” 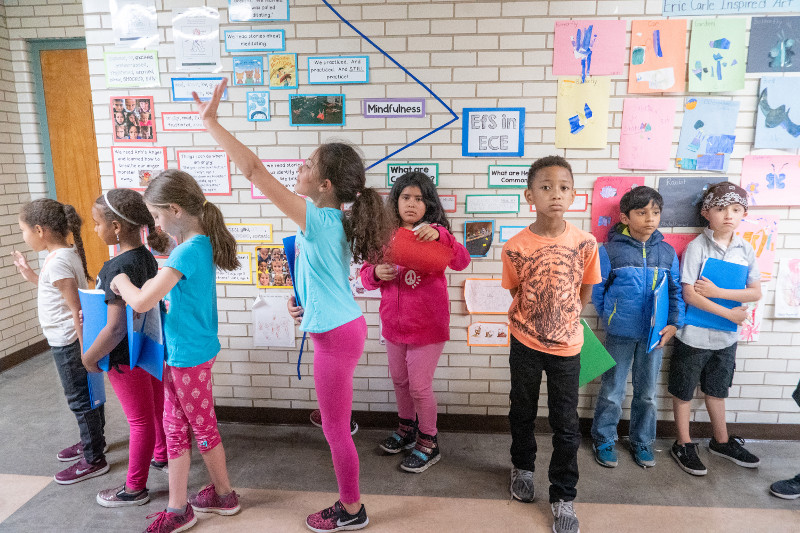 A school design with DU DNA

If anything, the Denver Green School testifies to the extensive reach of DU’s Ritchie Program for School Leaders, created more than 15 years ago to prepare education professionals to steer schools effectively. “We study systems and culture and change,” says Susan Korach, the program’s co-creator and chair of the Morgridge College’s educational leadership and policy studies department. Along the way, program participants are called on to design a school they would like to lead.

Fresh from this exercise, Diaz, Harrer and company got together to begin outlining their dream enterprise. Coyne, then working at what was DU’s Center for Community Engagement to advance Scholarship & Learning, joined the team as well, eager to be part of this groundbreaking enterprise.

“As I like to tell the story,” Coyne recalls, “Craig, Mimi, [Post] and myself, we all got together over many cups of coffee and many pitchers of beer. We concluded we wanted to do something different, something truly more innovative, than what was done at the time.”

By different and innovative, Diaz explains, they meant responsive to field-tested data and best practices, rather than to conventional wisdom and old-school thinking. “A lot of the theory and pedagogical foundation for our vision came from Ritchie,” Diaz says.

First, the founding team wanted to engage students in theme- and project-, rather than textbook-based learning. They settled on sustainability as a theme in part because ongoing environmental degradation merits the focus and in part because the green economy was, at the time, a top priority for state leaders.

As it turns out, the sustainability emphasis has spawned countless creative projects. For example, Coyne says, for a unit on water conservation, DGS third-graders sought the assistance of their sixth-grade pals to analyze the best method for watering the school’s one-acre farm and 20,000 square feet of garden plots. After evaluating the options, they determined that a drip irrigation system would save a million gallons of water over the course of a year.  Meanwhile, a unit on Western expansion had students looking at the historic phenomenon not just from the perspectives of Native Americans and newcomers, but also through the eyes of bison, whose very existence was threatened as the wagon trains rolled across the plains. And come spring, all the classes take charge of a garden plot, sowing plants that correspond to a theme. The sixth-graders might take on a salsa garden, while the autism students might opt for a sensory plot, with lamb’s ear to touch and perhaps lilies to smell. 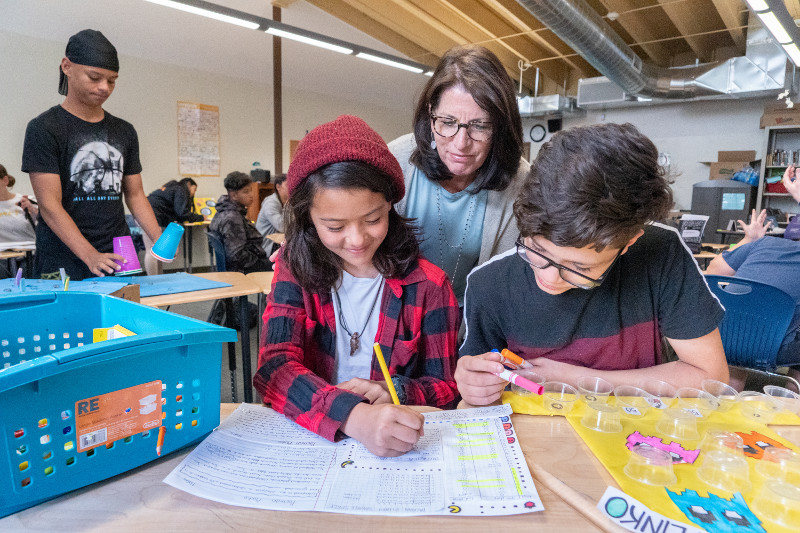 These are just the kind of projects that resonate with Diaz, who has long favored this approach to learning. As a student herself, she recalls, “I was in a pretty forward-thinking high school where I was immersed in project-based learning. And as I became a teacher, it was the foundation of my teaching style. When I was thinking of a school [during her time in the Ritchie Program], it was always the natural way that kids should learn.”

In addition to a program heavy on projects, the design team also wanted an organizing model that was itself sustainable. In other words, Harrer points out, they wanted a structure that didn’t burn out leaders and teachers but that empowered them instead. What’s more, they wanted a model and culture that would not dissolve if, say, the principal moved on to another post. The result: a team of three lead partners and several teaching partners all on the same page, ensuring the school can maintain its mission should there be turnover.

As Harrer puts it, “No one leader is going to come in and say, ‘No, [now] we’re doing it this way.’” In fact, the school survived the departure of Harrer and Diaz some five years after its debut. “Mimi and I both left the school the same year, and the school didn’t miss a beat—because of the shared leadership model,” Harrer says, adding that in traditional schools, it typically takes a new principal three to five years to build a culture and anchor a vision. “There’s an automatic drop when you lose a principal,” he explains, “and it takes three to five years to build that back up.”

What’s more, Coyne says, “The average life of the principal in a school in DPS is just shy of three years.”

That, the Ritchie Program’s Korach says, highlights one of the biggest problems facing schools today. It also explains, in large part, why the Green School stands out. With consistent leadership, it’s more likely to get desired results. “One thing that schools face a lot — and it deals with sustainability — is that there is a relationship between school performance and leadership, and, albeit a more indirect relationship, between student results and leadership,” she says.

The report card is in: a model that gets results

Back on the Green School campus, Coyne, still bedecked in his Captain Underpants regalia, is summoned to the front office. It’s the end of the day, and a parent wants to catch up on a student’s progress. Coyne’s absurd getup is sure to put everything in perspective.

Sure, it all seems like great fun – all this problem-solving and digging in the dirt and field trips to mountaintops to measure snowpack. But fun isn’t the end goal. Rather, it serves the end goal. All along, Coyne says, the design team thought if they could keep students engaged and teachers motivated, the “test taking would take care of itself.”

After all, he adds, “At the end of the day, we are going to be judged on our data and our test scores.”