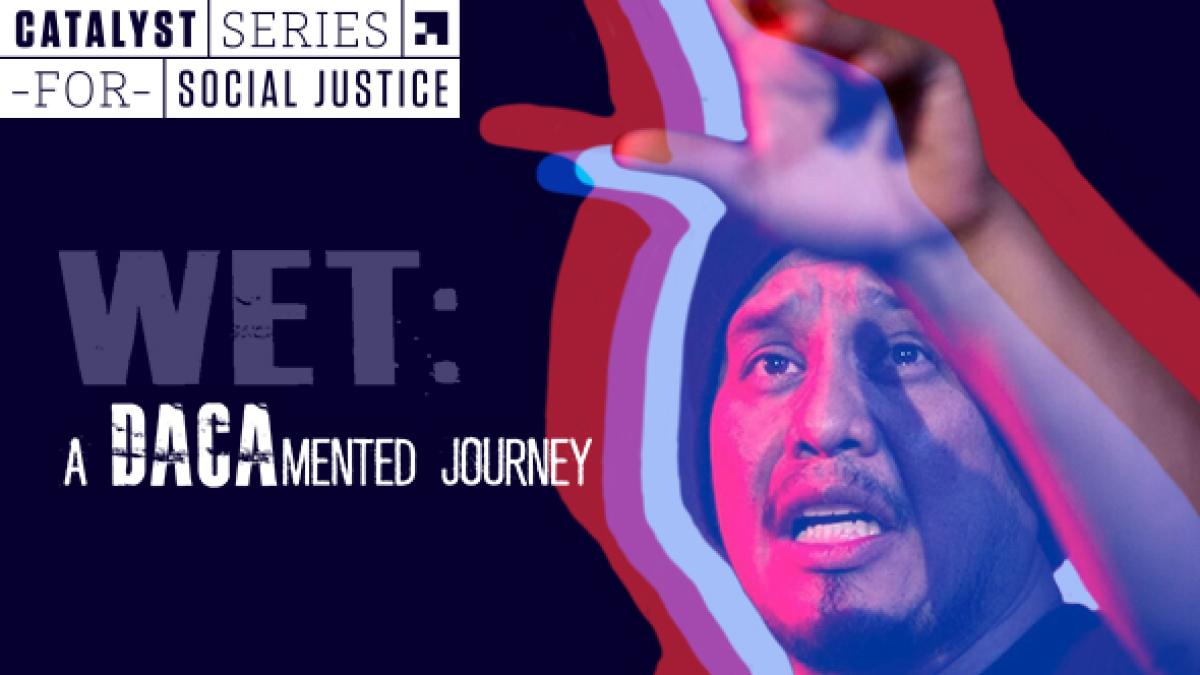 In addition to watching the performance, attendees had the opportunity to engage in a dialogue with Alpharaoh to talk about his inspiration for writing the show, and how they might take action to promote immigration reform.

In her introduction for the evening, Amanda Moore McBride, dean of the Graduate School of Social Work, challenged the audience to think about the way people are affected by borders. “National boundaries are social constructions of reality that impact people’s lives,” she said. “Tonight, we want to contemplate that fact through theater.”

During the show, Alpharaoh addressed the issues national borders can raise head on, playing nearly 20 different characters to tell his own life story of growing up as an undocumented citizen. He reenacted key moments in his life, beginning with his childhood in Los Angeles, where he has lived since his mother brought him to the United States from Guatemala when he was only three months old.

“The show is technically a monologue since I’m alone on stage, but you meet my mother, my father, my daughter—a whole slew of people who have participated in this journey,” Alpharaoh explained in an earlier interview.

One of the major turning points of the play involves Alpharaoh’s return to Guatemala to meet his grandfather for the first time—just as President Trump announced that he was ending the DACA program.

Alpharaoh delved into the logistical struggle he faced trying to make the trip without having proper documentation, as well as the personal struggle of coming to terms with his cultural identity. “I’ve grown up in a society where I was not allowed to do anything but assimilate culturally, and then as an adult was told by the same society that I wasn’t welcome because I don’t have a piece of paper that says ‘you belong,’” Alpharaoah said.

Despite the political nature of the show’s content, Alpharaoh insisted that he is an artist above all. “I’m just an artist who’s sharing my story and hopefully creating enough of an awareness that people will be willing to have a dialogue about what it means to have comprehensive immigration reform in this country,” he said.

He said he wants his show to encourage conversation more than anything: “I hope that this show gives people—even if it’s for those 85 minutes they are sitting in the audience—an opportunity to see another person as a human being, not just as a number, or a statistic, or a media story, or a political ploy, and be able to have a conversation afterwards.”