Q&A: Ahead of the Marade and Women’s March, DU Professor Discusses Power of Marches 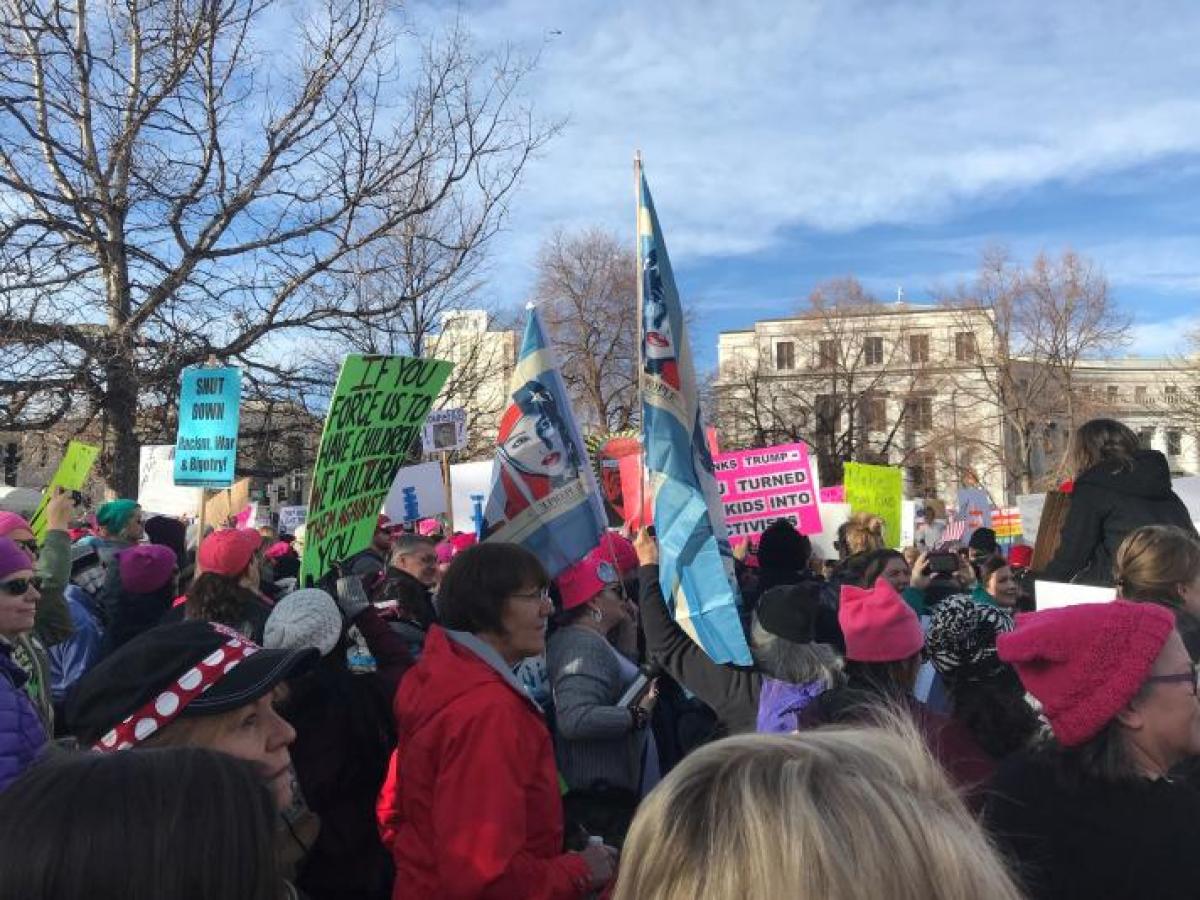 Political participation is not only an American tradition, but also a Pioneer tradition embraced by students of varied political persuasions. In 1968, for example, DU students protested the presidential run of Alabama Gov. George Wallace. In 1970, they joined a statewide student strike in protest of the Kent State shootings, the invasion of Cambodia and the Bobby Seale trial.

This weekend, many of them will march at the annual Marade (Jan. 21), a march/parade in Martin Luther King Jr.’s honor, and the third annual Women’s March (Jan. 19).

With many DU students preparing to attend these high-profile events, the DU Newsroom spoke with Marie Berry, assistant professor in the Josef Korbel School of International Studies about the impact of marches and why DU students are drawn to participate. Berry is the director of the Inclusive Global Leadership Initiative, which examines the role women and underrepresented groups play in movements across the world.

Why do people march?

I think a lot of people march because there’s a sense of community, and I think it’s cathartic to march. It’s a chance to express our solidarity in opposition to policies and rhetoric [they consider] detrimental to our community and country. I think people want to be part of this process of change. We are a democracy that sometimes feels like it lacks mechanisms for participating directly outside of the voter’s booth. These marches provide a channel for activism, for affirming our shared humanity, and for beginning to make demands.

How effective are marches at bringing about change or a tangible outcome? Is that even the goal?

There are a few strengths of these marches. One of them is simply establishing visibility for a group of people with a collective goal or cause. That can really begin to shift social norms and understandings of the number of people who feel similarly about a particular goal or cause or issue.

[Marches] can also act as catalyzers. One of the things that came out of the 2017 Women’s March was the momentum … around beginning to champion women running for political office across the country. We saw the fruits of that mobilization in the mid-term elections in November with the really astounding number of women and people from historically marginalized communities that were elected. A lot of that success stemmed from the momentum of the Women’s March and from the organizing nodes that emerged out of the march. The networks and infrastructure that get established as a result of orchestrating such a major event can last and can actually become the scaffolding for organizing outside of that march.

Outside of political or cultural change, what can marches do for the participating communities and for those that are watching?

In the U.S., one of the powerful things about marches is that they reflect a historical legacy that is deeply rooted in our history as a country — everything from the suffragettes taking to the streets to demand the right to vote, to the civil rights movement’s deeply difficult fight for the equality of all citizens in this country, to the water protectors at Standing Rock. I think that we as a Denver community can learn about our own history of marches because it’s rich and provides clues of when we, as a community, have stood up to oppression before.

What are some of the shortcomings of marches?

I was teaching a class on gender, security and human rights over the inauguration and over the 2017 Women’s March, and one of the things that really struck me was the number of my students of color who felt left out of the Women’s March the first time it happened. Marches — and movements more generally — have to be deeply sensitive to that process. The stakes are very high when we organize these things. The legacy of the Women’s March has left people feeling isolated and marginalized in its wake, which I know wasn’t the intention, but intention and effect are not the same thing.

A lot of people would also say that there is a tremendous amount of effort and energy that goes into these events without concrete asks, platforms or demands. I think sometimes marching makes you feel like you’ve done something, and you feel like you checked a box because you showed up. But, that’s not the same as voting. That’s not the same as helping organize political campaigns and really putting democracy into action through the political process. It’s also not the same as putting your body on the line and taking action for marginalized communities in a way that is not easy and comfortable.

This will be the third year for the Women’s March and the 34th for the Marade. Does that repetition make them more or less potent?

There is something really powerful about repetition and about constantly maintaining that tradition. Consistency can be very impactful. At the same time, one of the most politically consequential elements of marches is the size of the turnout, and turnout often dwindles with repetition — especially after the turnout at the Women’s March was so massive that first year, really the largest single-day turnout of people in the streets in U.S. history. As a result of diminishing turnout, perhaps we can see the marches as slightly less consequential in a direct political way. But certainly in a broader social way, these events continue to demonstrate the sustained commitment of people from many different walks of life toward challenging oppression and championing human rights.

What impact can marching or joining these movements have on students?

We are living in a political moment that is very difficult. … There’s a lot of backsliding when it comes to rights, when it comes to gender equality, when it comes to racial equality and progress. Our students need to understand what this current political moment means and to decide for themselves whether or not they are comfortable with that. The Women’s March and Marade this week are two opportunities for students to stand up, resist these trends and be in solidarity with millions of others actively working to promote a future of inclusion, dignity and respect for all.

DU  invites you to join the University at the 2019 Marade. For details and to register, click here.