Restoring Justice to the Courtroom, One Case at a Time 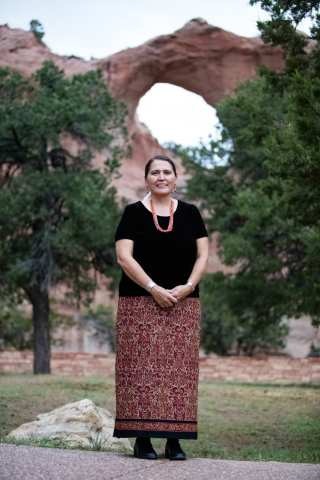 For many people, the word “trial” conjures up an open courtroom, an imposing judge looking down on a defendant, and perhaps a few serious lawyers in fancy suits. If we were given the chance to look into the courtroom of Cynthia Thompson, who will graduate in June with a master’s degree in social work, we would see a much different scene.

While working toward her degree through the Graduate School of Social Work’s Four Corners MSW Program, Thompson has served as a trial judge with the Navajo Nation Judicial Branch. Thompson—who is a member of the Navajo Nation—hears cases in several locations in northeastern Arizona throughout the week and then attends classes in Durango on Fridays and Saturdays.

“In Window Rock, the capital of the Navajo Nation, I hear a variety of family cases: guardianship, adoption, name changes, health commitment cases and domestic violence cases,” she explains. The highlight of her week comes each Thursday when she’s in her home community of Chinle. Thanks to a Department of Justice grant, Thompson is working to integrate the Navajo culture into the community’s judicial process.

“I’m tasked with implementing a juvenile healing and wellness court,” Thompson explains. “By incorporating elements of the Navajo culture, we hope to reduce substance abuse, suicide risk and a lot of the social problems that the youth are faced with in the community.” Thompson is conscious of the community effort involved in this project. Along with her own work, Thompson also credits other service providers, especially those in the Chinle Unified School District and Chinle Indian Health Services, for their support of her project.

So what does that look like exactly? Take the case of an underage high-school student charged with possession of liquor. Rather than having the student come before the judge (Thompson) for a sentencing hearing that probably would result in incarceration, the student is routed through a peacemaking program.

“The family, including extended relatives on each side, are invited to join in the process to restore harmony within the youth with family support,” Thompson explains. “We encourage that through our cultural values in order to get the child back on course to be successful through high school and to be a part of the community.” The hearing might even take place in a hogan, a traditional Navajo dwelling, rather than a courtroom.

Since she was a high school student, Thompson has known that she wanted to work with children. “In some ways, my decision to get a master’s degree in social work was in place before I even started working,” she says. In her northern Arizona town of Chinle, Thompson understood that she could make a significant impact in young people’s lives by working in social services.

Throughout her time as an MSW student, Thompson says she has learned a lot about how best to work with the children and families whose cases she hears. A class on family systems she took last fall stands out for its immediate applicability.

“I deal with families often, and so a lot of things I was learning there I could apply in my work,” she says. “It helped me to think about the case planning for children’s cases, and how best to work with other resources to get the best help for the children and their families. I think I took the court in a different direction so that we have more family discussions and less hearings where I’m the authority.”

Thompson’s work in her courtroom reveals a piece of her broader vision for social work. “We have to bring down the barriers to these kids’ success,” she says. “Rather than saying, ‘Well my policy says this,’ how can we go around that to work together? We need to ensure we don’t lose a child to the system, but instead help them through the system.”