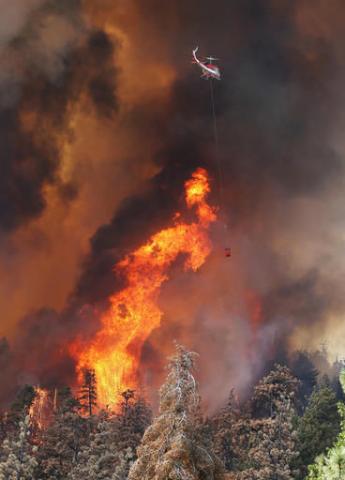 What’s the difference between a ponderosa pine tree and a Home Depot two-by-four?

These days, Michael Kerwin says, it’s not much. Both are so dry they’re like matchsticks: “happy,” in the DU geography professor’s words, to burn when a fire rolls through.

If that’s the case, then Colorado’s summer of 2018 must feel like ecstasy. With record-high temperatures in Denver and near-record-low snowpack in southern Colorado, wildfires have scorched more than 160,000 acres of wilderness statewide.

“We get wildfires here virtually every summer,” Kerwin says, “but what we’re seeing this year is the impact of the heat. The conditions are really different. The temperatures are warmer.

“There’s no doubt about it that this is bleak” for the environment in the long term, he adds. “But this is not new news whatsoever.”

For the past 20 years, Kerwin has documented a noticeable shift in Colorado’s climate. June has become “cotton dry,” similar, he says, to conditions you would see in Arizona or other southwestern states.

The effects have already been devastating. (Just look at the state’s now-infamous summer of 2012:4,167 wildfires; 348,083 acres burned; six deaths; 648 structures destroyed; 32,000 evacuations; and more than $538 million in damage.) But Kerwin says things could get worse.

A wildfire is called a natural disaster for a reason. Flames have ravaged wilderness since wilderness existed. “Ecologically,” Kerwin says, “fire is essential.” He estimates that, in prehistoric days, small fires would break out every 10–20 years, thinning forests, preventing them from becoming overly dense. Some ecosystems, he adds, rely on the heat from fires to germinate seeds while counting on ash to provide nutrients for healthy regrowth.

But devastating wildfires — like the 1871 inferno that killed as many as 2,500 people in Peshtigo, Wisconsin — and increased tourist and fire activity in places like Yellowstone caused the newly formed National Park Service to begin serious fire-suppression efforts. As a greater number of structures were erected on woodland mountainsides, Kerwin says, firefighters began to extinguish flames, disregarding any ecological value.

Such efforts, Kerwin says, have resulted in thick forests pocked with dead trees, ready to immolate. And even remedial tactics like chainsaw-driven forest thinning, while well-intentioned, are largely futile.

“Research is now showing that when a forest burns, the climate is not necessarily suited for those trees living in a particular area to regrow,” he says. In other words, if a ponderosa pine or evergreen woodland burns, for example, Colorado temperatures may be too warm to support their regeneration. According to Kerwin, that means many of the state’s most iconic landscapes will never look the same — and there’s little that can be done about it.

“Those trees are going to burn at some point,” he says. “It’s going to be hotter; it’s going to be drier. There’s no debate about when climate change is going to hit. It’s here. It’s climate now. So the conditions that we have now are what we have. That’s the reality.”