Stepping Out of the Shadows

At DU, Fryda Faugier is lighting the way for undocumented students 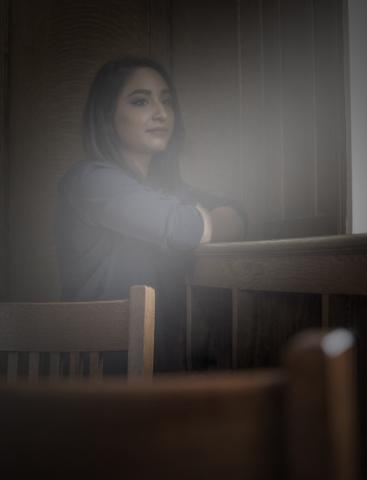 There are two things Fryda Faugier is not.

She is not a U.S. citizen. And she is not afraid to tell you so.

“I’m an activist; I share my story,” she says. “I’m sure that had I been born a citizen, I would not be facing the same struggles I face today. But because of these struggles, I have found a passion that I didn’t think was there.”

The Fryda Faugier of old wouldn’t have told you that. Before she elected to complete a triple major in just three years (she couldn’t decide on just one or two), before she even came to the University of Denver, Faugier wouldn’t have said a word about her immigration status. It was frightening, and she was shy. Shaped by a lifetime spent in the shadows, she had learned not to talk to anyone or do anything.

Though her only memories are of Colorado, her Mexican birth kept her family in a sort of hiding. Their one-bedroom apartment had no furniture, Faugier recalls, just a mattress in the middle of the floor where the family of four slept.

Certain conversation topics, like getting a driver’s license, were mysteriously off limits. When college came up, she was told no one in her family had gone. It’s “not what we do.” But in her junior year of high school, Faugier learned the truth.

“They told me, ‘You don’t have any documentation; I don’t think you can go to college,’” she remembers, still frustrated that a hyper-involved straight-A student could be held back, not by her qualifications but by her heritage.

The 2012 Deferred Action for Childhood Arrivals (DACA) program paved a path, but that doesn’t mean it was smooth or straight.

“It was not great,” she says of her arrival on campus.

Money was tight, and Faugier lived at home, so she hardly spent any time on campus. She had few friends. She considered dropping out. Several times, in fact.

But she couldn’t bear the thought of coming away empty-handed, proving her doubters right. Faugier stuck with it, and then, attending a dinner for first-generation college students, everything changed.

“When they shared their stories, I was like, ‘Oh my God, someone understands me. Someone knows what I’m going through,’” she says. “I finally felt more integrated into this campus.”

Since then, Faugier has made it her mission to help everyone else feel the same.

She started by carving out a position for herself in DU’s Center for Multicultural Excellence. As the University’s first undocumented student support coordinator, she has worked to secure additional financial aid for students like her. In tense and intimidating times, she is more motivated than ever to be an empathetic, experienced resource for parents and students who just want to be seen as normal. In other words, she says, she is trying to provide others the services and assistance she did not have access to herself.

In June, Faugier will graduate with degrees in international studies, socio-legal studies and Spanish.

Unlike the Fryda Faugier of three years ago, she has realized she doesn’t have to be a prestigious immigration lawyer or a doctor to be successful. Today, she dreams of pursuing a master’s degree and going into higher education. But she feels what she does for work is less important than what she’s working for.

“That’s what keeps me going,” she says. “There are students in the shadows that are never going to come out and say ‘I’m undocumented,’ but that doesn’t mean they aren’t here.

“A lot has changed [on campus] and a lot of that has been because I have shared my story,” she says. “[But undocumented students] still need the support, and they need that reaffirmation that they’re important. That work is never going to be over.”