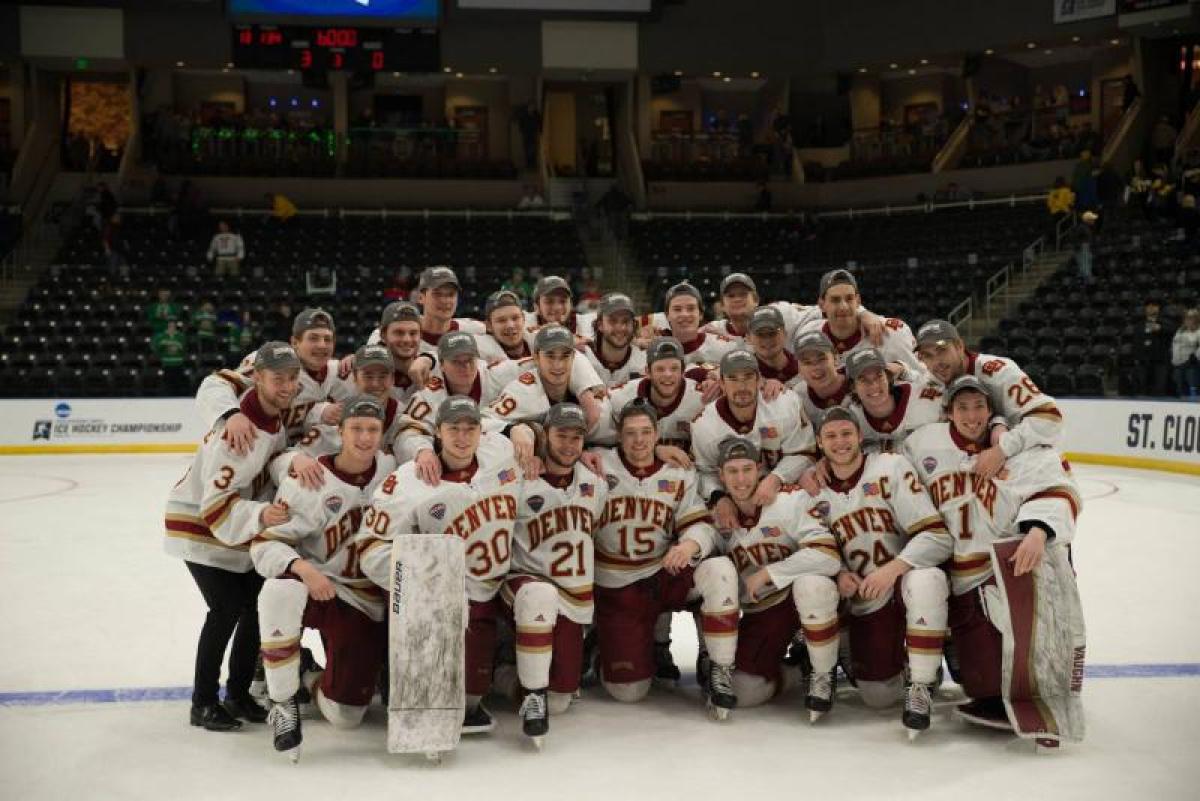 Before the puck dropped at the start of this year’s college hockey season, many fans and sports journalists thought this might be a rebuilding year for the University of Denver. After all, the team had lost its head coach to the NHL (Jim Montgomery); the program’s all-time winningest goalie had graduated (Tanner Jaillet is tied with Ron Grahame with 82 wins in net); and five student-athletes had left college early to go professional (Henrik Borgström, Dylan Gambrell, Blake Hillman, Logan O’Connor and Troy Terry).

However, the Pioneers blocked out all talk of rebuilding and proved the doubters wrong. They are now one of only four schools in college hockey still playing.

“It’s a really big accomplishment with everything that has gone on over the last 12 months with our program and the loses that have been well-documented,” says David Carle, the Richard and Kitzia Goodman Head Coach. “For our group to be able to refocus and grow as much as we have this year is really exciting. I’m proud of the guys in the room, and I know they’re hungry to continue to go — and we’re not done yet.”

After defeating both Ohio State and American International College in the regionals, DU has advanced to its third Frozen Four in the last four years. On Thursday night, the Pioneers will face the University of Massachusetts, with the winner playing on Saturday night for the championships against either Providence or Minnesota Duluth in Buffalo, New York.

The primary reason behind DU’s current success is the team defense, and more specifically, the great play in net. Freshman Filip Larsson became only the fifth goalie in NCAA history to record back-to-back shutouts in an NCAA regional tournament since the current format was instituted in 2003. He stopped all 50 shots that he faced against Ohio State and American International.

“That was my goal for the weekend, because we don’t score more than one or two goals a game against good teams,” Larsson says. “I feel like I stepped up and made a few good saves, and I think I had my best weekend all season.”

Larsson split time in net with Devin Cooley during the regular season. Both finished ranked inside the top 10 in save percentage and lowest goals allowed average.

“Larsson has been incredible for us; he’s the reason why we have gotten this far. When he’s in net, and even when Cooley is in net, when we have goalies that are playing as well as both of those guys are, the feeling in front of them is just nice and calm,” says senior forward Colin Staub. “We know that as long as we do our duties he’s going to do his, and even when we don’t, he’s going to be back there to backstop us. He’s a failsafe in every aspect of the game.”

Larsson and Cooley are part of a roster featuring the most freshmen and sophomores and fewest seniors of any team entering the postseason, let alone this weekend’s Frozen Four.

“This is going to be a new experience for 19 of our kids,” Carle says. “The positive is that we have a staff and some veteran players who have been there before and can impart some of the things we have been through as a group already.”

As a group, their confidence has continued to build, and no one is fine with just being in the Frozen Four.

“We have to stick to our process. We have to be committed to team defense, and we have to execute a little better offensively. We can’t rely on Larsson to continue bailing us out with shutouts,” Staub says. “A lot of people didn’t really expect us to be going this far and being able to prove people wrong thus far is a great feeling within our group.”

Youth Not Preventing the Pioneers From Setting Sights on Another Championship