DU shows support with a booth at Civic Center Park 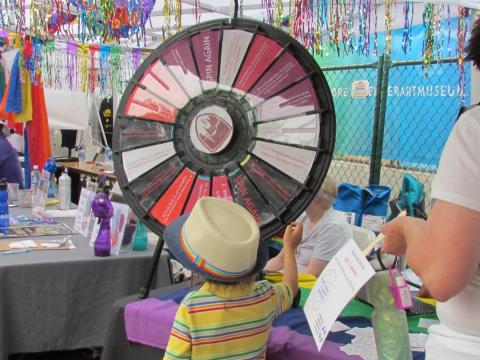 Over 350,000 people converged on downtown Denver this last weekend to celebrate PrideFest. The weekend-long event was an opportunity for Colorado’s LGBTQ community to come together and overshadow a recent court ruling. It was just two weeks ago that the U.S. Supreme Court ruled in favor of a Colorado baker who denied a same-sex couple a wedding cake. On Sunday, that couple served as grand marshals for the PrideFest Parade.

For the 12th consecutive year, the University of Denver celebrated PrideFest with a booth in Civic Center Park. More than 800 current students, incoming students, faculty, staff and alumni stopped by the booth, including one alum who graduated from DU in 1977. DU’s booth featured a trivia wheel allowing visitors to learn fun facts about the University’s history. Campus Life and Inclusive Excellence also hosted a photo booth where visitors were able to show their pride. Photos are now posted to the University of Denver’s Pride Lounge Facebook page.

You can learn more about DU’s LGBTIQA community by clicking here.