DU graduate Katie Bokenkamp recently accomplished an impressive feat — completing an honors thesis in history and another thesis entirely in Italian. In both cases, Bokenkamp’s stellar academic achievements were enhanced by University-sponsored international travel — to the United Kingdom for research on World War I, and to Perugia, Italy, for an immersive study abroad experience.

Growing up in Parker, Colo., Bokenkamp chose to attend the University of Denver because of its challenging academic environment and its quarter system, which allowed her to take a wide variety of classes during her four years of college. 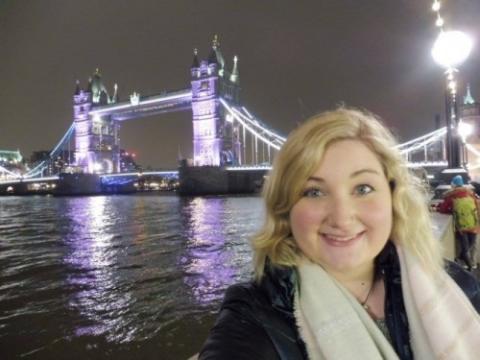 “I was drawn to the history program in large part because of the wonderful professors I took classes with during my first year and the engaging in-class discussions,” she says. “I decided to declare Italian as another major because of the passionate and remarkable professors who love Italy and cherish their students.”

As a recipient of the highly competitive Partners in Scholarship (PinS) grant from the University’s Undergraduate Research Center, Bokenkamp not only worked closely with associate professor Carol Helstosky, but was able to travel to the Imperial War Museum (IWM) in London, reviewing primary source material for her history thesis focusing on the relationship between British soldiers and dogs during World War I and its aftermath. Her thesis won an award for best seminar paper in the Department of History.

“My time at the Imperial War Museum in London was fantastic. I was able to examine soldiers’ private papers, memoirs and letters that discussed the dogs around them,” Bokenkamp says. “Traveling in London and completing research at IWM allowed me to bolster my argument while gaining firsthand research experience.”

In her paper, she examines how WWI veterans perceived authority and class conflict through dogs, and what happened to the bond between humans and animals when the two were put in a severe environment.

“I argue that since British soldiers were losing bits and pieces of their humanity in the war, they looked to dogs in order to regain some of that lost humanity,” Bokenkamp says. The opportunity to conduct research in London also exposed Bokenkamp to postwar literature that formed the basis of her honor’s thesis work, which allowed her to expand upon her original ideas.

Beyond her travel to Britain, Bokenkamp also had the opportunity to study abroad in Perugia. Although she originally enrolled in an Italian class on a whim, she soon became fascinated by the Italian language and culture. Her curiosity about the intricacies of human interaction across time and cultures dovetailed nicely with her experience as an international student in Perugia — an ancient hilltop town where she experienced Italian culture firsthand. As a Spring 2017 graduate, her contribution to the Department of Languages and Literatures Italian program was recently commemorated with an Excellence in Italian award.

Now as a DU alumna, Bokenkamp will move one step closer to her dream of becoming a professor in Italian history and culture. She will soon depart for Oakland, Calif., to pursue her master’s degree in Italian culture and history at Middlebury Language Schools. After six weeks of intensive study, Bokenkamp and the rest of her cohort will spend a year in Florence, Italy, immersing themselves in the region’s art and culture.

When reflecting about her college experience, Bokenkamp is thankful for the many opportunities she’s had to follow her curiosity. Her advice to other DU students is simple: Give yourself permission to explore.

“Take classes in subjects that sound incredible — they could become your passions. Take advantage of the marvelous professors here at DU; they know so much and want to help you succeed both during and after college.”