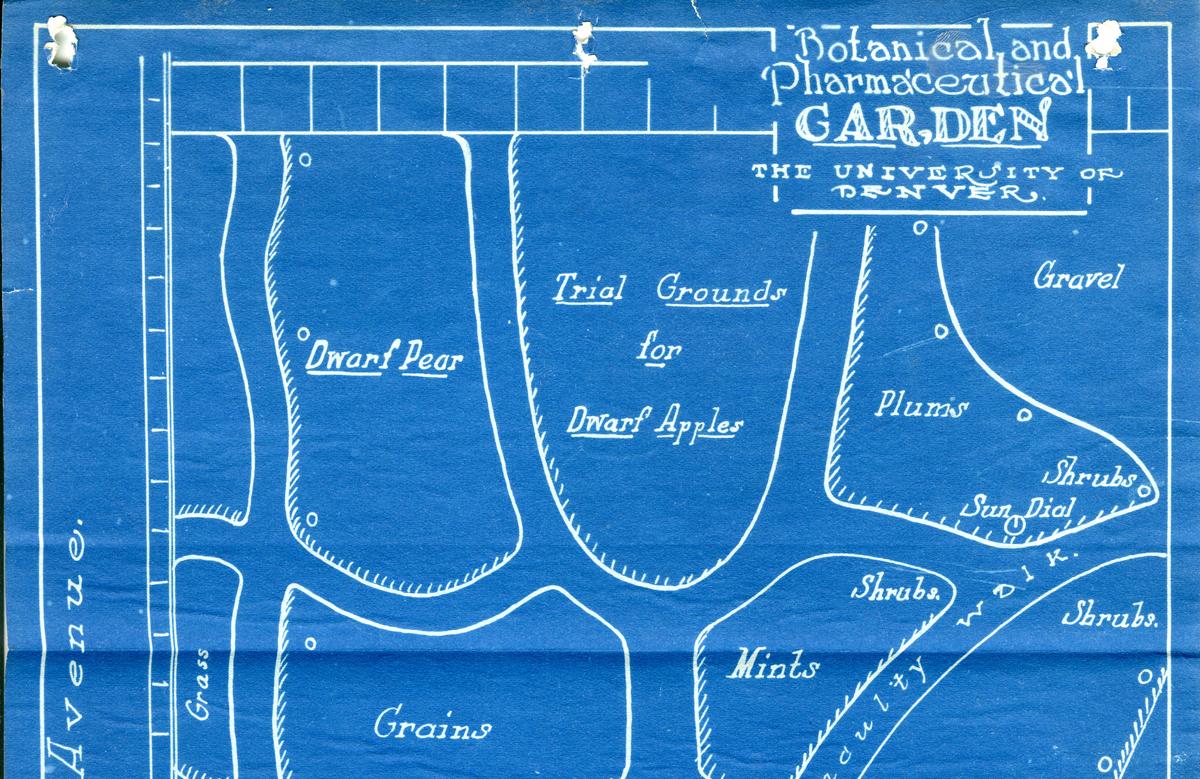 Plans for the University's botanical and pharmaceutical gardens show plots designated for experimentation and hybridizing.

A century ago, the University of Denver campus was home to what was then considered one of the largest pharmaceutical and botanical gardens in the West. Much to the delight of flora fans, the experimental grounds were full of specimens that ranged from the commonplace to the exotic, from the useful to the ornamental.

In addition to providing an aesthetic retreat, the garden — located just north of Warren Avenue on University Boulevard — doubled as a resource for students in DU’s pharmacy school, launched during the chancellorship of David Hastings Moore (1880–­89) and shuttered during the Great Depression. Plants from the gardens were harvested so students could explore their medicinal and therapeutic — or perhaps even poisonous — properties. Think cardiotonics compounded from foxglove or acute colic treatments featuring a tincture of mint.

Then, as now, pharmaceutical products were largely derived from nature’s bounty. As Julie Morris, a teaching associate professor in the Department of Biological Sciences, notes, “Most molecules that are used in drugs — what we call bioactive molecules — come from nature in one form or another. Sometimes chemists and biologists modify those molecules a little bit to get the active form that we put into medications, but for the most part we’re using molecules from nature, including many from plants.

“Plants make these molecules to protect themselves — against insects and different kinds of herbivores — so these molecules can have an effect on animal systems,” she says. “If we learn what that effect is, and we can control that effect, then we can use them in medication.”

For years, the garden was presided over by Ira Cutler, a botanist who earned a master of arts degree from DU in 1907 and who served on the biology and zoology faculty for more than three decades. In a short history of the gardens he penned for posterity, he specified that, in the fall of 1916, roughly 175 species were planted in the garden and in other beds around campus. 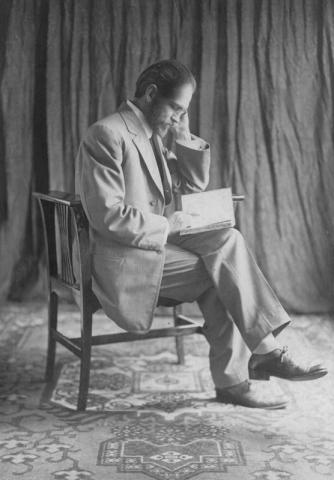 “The object of the garden,” Cutler wrote, enlisting a flowery prose style common to the era, “is to furnish the pharmacy school materials with which to work to allow the students therein to see the different drug plants in the growing condition, to furnish materials for general botanical use and to beautify the grounds of the University.”

In determining just what to plant, Cutler worked closely with the pharmacy school’s leadership. “This coming season the Pharmacy department through it’s [sic] Dean has asked that the oil of thyme-producing plants or thymol plants, as Thymus vulgaris, be planted for analytical work in the Pharmacy laboratory,” he noted.

Cutler is perhaps best known to the DU community for having propagated — and then planted around campus — the red and yellow Rosa Denvera, also known as the DU Rose. (The artistic Cutler also doubled as a flower arranger, supplying centerpieces for those DU functions requiring festive decorations. And in his spare time, he composed “Hail to Denver U,” which once served as the institution’s alma mater.)

Ever eager to express his school pride botanically, Cutler spent years trying to hybridize a crimson and gold columbine — “to be known as Aquilegia Hybrida Denveri,” he wrote in notes documenting his progress. “Two years of waiting were rewarded with success unlooked for,” he continued. “Many of the seedlings combined the characters desired to a wonderful degree. Long spurs, red spurs and yellow bases, sepals brilliant red; in many cases making a beautiful and striking combination of our college colors.”

That early enthusiasm was nipped in the bud when Cutler’s beauties failed to thrive and reseed. “None of the specimens,” he lamented, “seem to have the sturdy characters of our native wild columbine Aquilegia Coerulea.”

Cutler also used the garden to test trees for Colorado’s landscaping needs. It was especially challenging to find varieties that could withstand the heavy snowfalls of early fall and late spring. And while serving as a government expert from 1916–20, Cutler developed hybrids of Indian corn in an experimental plot.

Plant enthusiasts and pharmaceutical firms from across the country came to know the DU garden for its abundance and often purchased seeds and bulbs from Cutler, who developed new varieties of iris, cacti and columbine. His papers, maintained by Special Collections and Archives at the University Libraries, contain numerous documents detailing transactions and exchanges. Not only was he always in search of new plants for the DU gardens, but he was happy to share his successes with others.

The tradition of using DU’s campus for educational purposes lives on today in the Chester M Alter Arboretum, home to several champion trees that represent some of the largest known examples of their species within Colorado. Going forward, Morris would like to see the institution’s many plots and beds put to educational uses.

Imagine, she says, a place where beds are cultivated to encourage the growth and study of other organisms or to support work in a science lab. In other words, imagine “the campus as a classroom.”