Trump’s Impact on the Economy

The initial reaction to the Donald Trump victory on Wall Street was clearly negative: The DOW futures plunged nearly 800 points late Tuesday and early Wednesday. The drop was not all that surprising, but what happened next was: Two consecutive days of the DOW closing up more than 200 points and soaring to an all-time high.

“I think what the market was reacting to initially was the surprise that Clinton wasn’t going to be elected, not necessarily fearful of what Trump might do,” says Mac Clouse, finance professor in the Daniels College of Business at the University of Denver. “After the overreaction was done, the markets reacted by saying, ‘now we know which direction we are going in.’”

What exactly that direction is remains a bit of a mystery. President-elect Trump outlined a lot of ideas during his campaign, but during his acceptance speech, he only discussed infrastructure in the U.S. 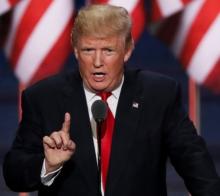 “We are going to fix our inner cities and rebuild our highways, bridges, tunnels, airports, schools, hospitals,” Trump said. “We’re going to rebuild our infrastructure, which will become, by the way, second to none. And we will put millions of our people to work as we rebuild it.”

That includes the national debt, which is nearing $20 trillion. Along with reducing the tax rate, Trump also plans to increase taxes on imports. The idea is to encourage companies to manufacture more in the United States rather than abroad.

“Trump can make a more favorable tax environment in the U.S. compared to international, but there’s no way he can reduce labor costs compared to what you can get in China, Vietnam or other Southeast Asian countries,” Clouse says.

Perhaps the biggest problem with all of this, Clouse says, is that nothing happens overnight.

“The complicated factor is, how long does that take? I put them into effect and it takes about four years for them to have an effect. Then, after four years of huge deficits, I get voted out of office and the next person comes in and finally my changes start to make an impact.”

Lower taxes for individuals are also part of Trump’s agenda. He has discussed reducing the number of tax brackets to three, claiming it will bring relief to middle-income Americans.

Another campaign promise is to repeal the Affordable Care Act. “That would be good news for companies, bad news for individuals,” Clouse says. More than 20 million Americans depend on it for insurance, but new mandates have made it a huge burden for small business owners.

“The problem with Obamacare is that young people are not buying into it, which is what you need for a healthcare plan to be successful,” Clouse says. “You need the young and healthy people to belong and pay into the system, so the system can pay for the older people that need it.”

More details about Trump’s economic plan will come out in the next two months before he takes office. For now, Clouse says there’s one thing he must do to calm any fears on Wall Street: “Getting a cabinet in place will help reduce uncertainty. Making good appointments will lessen the fears that some people may have.”