When was the last time you thought about your neuroendocrine system? Unless you’re a medical professional or a biology student, that answer may be “never” or “years”.  While most of us don’t think much about it, it is quietly doing a lot for us. Your digestion, sleep patterns, muscle growth, and more are controlled by the careful release of hormones throughout your body by neuroendocrine cells which exist in every major organ. With all of that going on inside your body, there are many opportunities for something to go wrong.

Thankfully, associate professor of biology Cedric Asensio thinks about it a lot. In his lab at the College of Natural Sciences and Mathematics, students and professors work side by side to learn the fundamentals of how these cells work to advance treatments for all types of medical conditions.

“The classical example is insulin, which was discovered a hundred years ago,” Asensio says. “Despite this, despite everything we've learned, there's still some very basic things we don't understand about how insulin works and how insulin is being released. That's what my lab is trying to figure out. How do you have a cell that is able to make insulin and release it only when you need it? And release the right amount?”

His specific area of interest are the mechanisms controlling the formation of intracellular hormone storage compartments within pancreatic beta cells that enable insulin release. He continues, “We're hoping by understanding this basic cell biology question, we might be able to understand diabetes better. Then to potentially find new treatments for diabetic patients. We don't develop drugs, but we study a process that is important for understanding the disease.”

In this way, the lab’s research contributes to every organization working to battle a disease that afflicts over 400 million people worldwide.

The work with advanced technology in the lab feels like the future of medicine. The process is both impressive and inspirational. Clinicians who have sick patients, often kids, gene sequence a sample of tissue and approach the lab, asking them to help them understand it. Using that gene sequencing data, the lab uses a technology called CRISPR to modify the DNA of pancreatic beta cells to recapitulate the mutation.

The modified cells are then grown in a petri dish and are exposed to glucose to generate the response they want to measure. That response can be captured using fluorescent reporters and imaging the reaction in real-time.

“When you shine a light with a specific wavelength, it will emit light at a different, specific wavelength,” explains Asensio. “So, if you have the right filters on a microscope, you can see that signal. Where you see those little flashes, you're looking at an insulin mimic being released in real-time, which is completely amazing.” 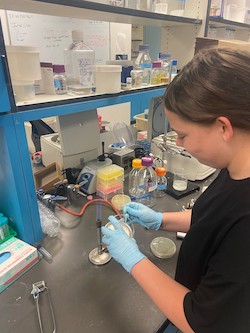 He goes on to explain the impact this could have on patients.

“We can replicate the mutation, test it in our system, and then say ‘yes or no, there is an endocrine defect happening because of the mutation’. And then we can say to the clinician, ‘look, we believe that your patient is sick because it's a defect in insulin secretion’, It might not directly help the patient, but at least helps them understand what's going on. We're not selling hope, but at least we're explaining to the parents of the kid ‘this is why your kid is sick.’”

Earlier this year, the University was awarded R1 classification by the Carnegie Classification of Institutions of Higher Education, joining the ranks of other universities conducting the highest levels of research activity. Asensio is proud of this classification, and what it means for the University's increasing research capabilities.

“When I was hired in 2014, I sat down with the chair of the department and the Dean of the college,” he recalls. “They told me, ‘We’re building something here, we’re really taking research seriously.’ They’ve done a fantastic job to recruit people to build a research enterprise and bring it to the level of an R1 institution. I would not have come here if I didn’t think it was possible.”

Asensio also sees the new R1 status making it easier for all researchers at the University to get more funding. “It’s going to help funding because there’s always a section where the grant reviewers have to score the environment,” he says. “A lot of time we got dinged on that in the past, people didn’t necessarily know who and what we are. You start at a disadvantage, and you need everything else to be perfect. This will help, because we will start to be recognized for the place we are. The research being done here is across a wide spectrum, and on a high level.”

As for the future of his research, Asensio is still focused on solving one piece of the neuroendocrine puzzle so that he might help other researchers help everyone else.

“I don’t want to sound like a crazy scientist and say cure diabetes, but I would love to be able to understand how beta cells make insulin storage compartments so well that I could tinker with it, so that we could influence the cells to make them release more or less insulin,” he says. “The goal is if you understand the mechanics so well, you are one step closer to curing diseases like diabetes.”